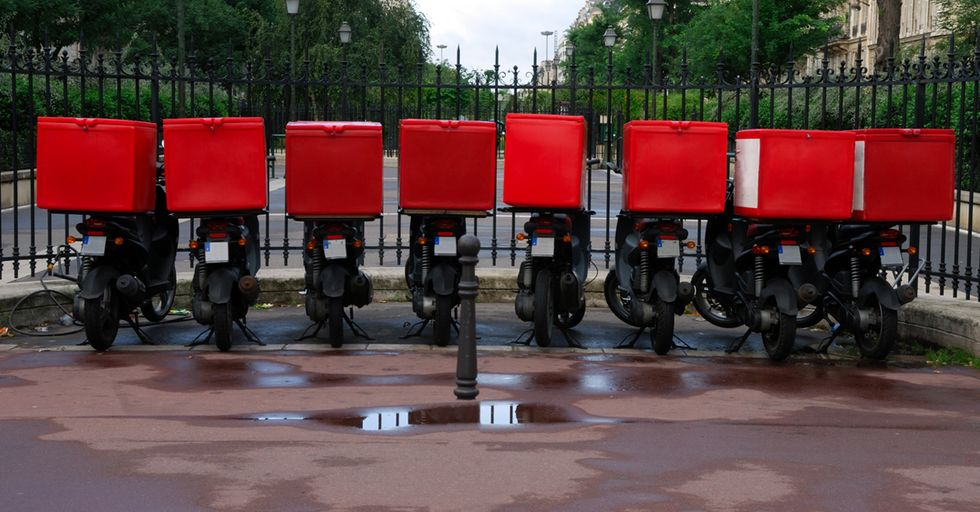 After a video of a Zomato driver in Madurai, India, sampling a customer's order went viral, Zomato -  panicking over consumer trust in the brand - put out a statement that they "take food tampering very seriously" and had "taken [the driver] off the platform."

However, this only served to make things worse for the app-based consumer service as the initial outrage sparked by the video amongst Twitter users turned to sympathy for the hungry driver, and calls for more regulatory oversight concerning the wellbeing and safety of Zomato's drivers.

Let's face it, the idea of your take away turning up a little lighter than usual is pretty disgusting.  But worse still is the idea that your delivery driver was made so hungry by his rapidly decreasing wages and brutally unattainable incentives that he had no choice but to eat some of your food.  It seems that Twitter has turned another funny video into a call for moral corporate responsibility.

This is the video that started it all.  It shows a Zomato delivery man unpacking the food and helping himself to some of it before smoothing it over and re-sealing the packet.

It wasn't long before the video went viral, prompting widespread outrage on Twitter.

Scrambling to react, Zomato quickly tracked down the infamous driver and promptly fired him after having "spoken to him at length" concerning his "human error in judgment."

When the laughter died away, the Twitter public began to speculate on why someone would risk their job in such a way.

Soon, Zomato came under fire.  People began to call for the platform to take more responsibility over its employees' wellbeing.

Where was his helmet? Where are any of their helmets?

Have you ever seen a Zomato employee wearing a helmet?  To many, it seemed Zomato hasn't tried hard enough to ensure their drivers' safety.  At least they've got branded T-shirts...

Zomato did issue a statement.

While Zomato's public statement did address the problem delivery tampering via "tamper-proof packages," there was no mention of pay-brackets for drivers or health and safety initiatives concerning branded helmets.

So what are Zomato drivers in India actually paid?

An investigation by the BBC uncovered harsh economic realities faced by Zomato drivers in India. Sources claimed they were paid 40 rupees per delivery (57 cents), and that the company planned to lower this to as little as 30 rupees.

Some background on Zomato

Zomato was started in 2008 by Deepinder Goyal and Pankaj Chaddah.  It now operates in 24 countries and boasts a net worth of $660 million. A 2017 article in the Economic Times reported that Zomato processes around 2 million orders in a month.

Zomato's drivers are compelled to work tirelessly by strict incentive programs.  Drivers who surpass 400 deliveries with no cancelations or missed orders receive a bonus.  But what if your tire bursts, or someone cancels the order by mistake?

With a rising population, Indian jobs are hard to come by.

6-8 million people join the Indian workforce every year.  This leads to a deficit of jobs, and a surplus of people willing to work long hours for minimal wages.  It's an ideal recruitment pool for companies like Zomato who need a large, willing workforce.

This isn't the first time Zomato has screwed up on insurance policy.

When 19-year-old Rishab Yadav was injured whilst making a delivery for Zomato, he was rushed to hospital, where he had to spend the night with an injured leg.  Not only was Yadav not assisted on his trips to the hospital, but he didn't receive any compensation either.

In an economic world dominated by consumer platform apps.  Many workers are having to settle for zero hours contracts, and jobs with very little in the way of worker's rights.

Corporations are always eager to maintain a good public image.  And it's never been easier to find out what the public think than it is now.  But is the social media platform really enough motivation for companies to take responsibility over the lives of their employees?

The problem with convenience companies like Zomato, Deliveroo, and Uber is that employees are not, strictly speaking, "employed" but "self-employed," which means they lack important protections.

When a Deliveroo rider's equipment breaks after six months, they are expected to compensate the company by performing the next 13 deliveries for nothing.

Uber doesn't have a great record either. Drivers in the UK have staged strikes in the past over poor pay and working conditions.

Do Zomato drivers get lunch breaks?

Not really.  Though drivers are allowed to go offline and take a break, the strict incentive program makes it difficult to do so.

So if these companies are so bad, why not just boycott them?

It's a good question.  Sadly, the answer is these companies are damn convenient, and we're lazy.

Are the drivers tipped?

Almost never.  When's the last time you tipped your Zomato driver, or your Deliveroo rider?

Though Twitter outrage is responsible for a number of political deaths, it rarely leads to change in company policy.

Zomato has recently lost a founder.

It's true.  10 years after he co-founded Zomato, Pankaj Chaddah has left the food technology firm.

It's not the first time corporations have been criticised for exploiting workers in developing countries.

Companies such as Gap have been dealing with this kind of criticism since the 1990s.

Unemployment in India is staggeringly high.  There are 31 million jobless people in India.  So it's little wonder why people choose to work difficult, demanding jobs.

How long before we all forget about the incident?

Probably not long.  We tend to lose interest in debates like this very fast.

Zomato have more to worry about on the horizon.  They expected to soon be overtaken by their rival company, Swiggy.

Are other companies implementing tamper-proof packaging?

Well, Zomato was the only company impacted by all this, so there's no sign of it yet.

Where is the Zomato driver now?

Probably looking for work elsewhere.  His identity is protected and he has not commented on the incident.

That's really up to you.  If the poor working conditions of your Zomato driver doesn't bother you, then it might at least be worth double checking your meal.