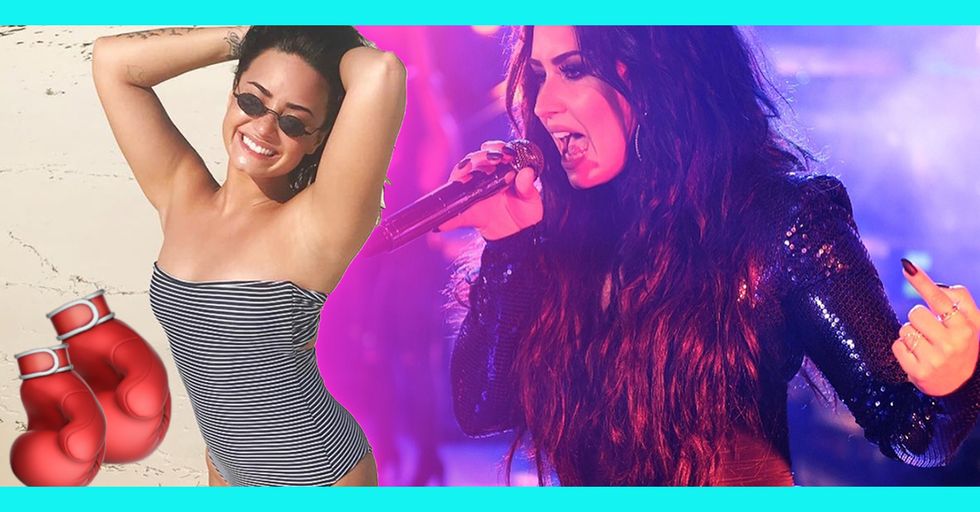 The new year is all about setting goals for yourself. Most of us focus on getting in shape, dusting off old projects we've pushed to the sides, and maybe finally cleaning our closet. For pop star and all around badass Demi Lovato, she's starting off 2018 with loving herself.

Which if you ask us, is a pretty dang good way to start off the year. With how crazy everything in our world is, it's important to focus on self-care and self-love, now more than ever.

You'd never know by her carefree smile and beach-living that she's constantly battling her own insecurity. "So, I’m insecure about my legs in this picture but I’m posting it because I look so happy and this year I’ve decided I’m letting go of my perfectionism and embracing freedom from self criticism," Lovato wrote.

"Learning to love my body the way it is is challenging but life changing," Lovato continued. "Giving up my eating disorder has been the most challenging journey of my life but I work every day towards solid recovery even if I mess up sometimes."

A few months ago, Lovato released the YouTube documentary, Simply Complicated.  The film followed her life and she spoke very candidly about her past drug addiction and battle with her weight and taking control of her life.

Lovato has been sober for nearly six years, though her battle with an eating disorder is ongoing.

"Food is still the biggest challenge in my life," she said in the film, after she admitted to recently relapsing and purging. Her vulnerability and honesty is perhaps why fans feel so connected to Lovato. Anyone who has ever gone through darkness in their life can relate to Lovato's own journey. Keep reading to find out more about Lovato's battle with her eating disorder...

"I get envious towards people who don’t struggle with an eating disorder because I think my life would be so much easier." Eating disorders are crippling, and Lovato is open about hers to her fans.

Lovato explains that her toxic relationship to food started when she was a little girl.

In the documentary, Lovato says, "The food came first, when I was 8 years old and my little sister was born, a lot of the attention was taken off me and onto my little sister." Emotional eating is common, and if not addressed can lead to unhealthy and dangerous habits.

Lovato says that food often acted as a sort of "medicine" for her.

"I had started working at that time and was under a lot of stress so I would bake cookies for my family, and I would eat all of them and nobody would have any to eat. That was my first memory of food being that medicine for me." Her struggle with food often comes at highly emotional times in her life. "When I was in a relationship with, I went three years without purging and when we broke up that’s one of the first things I did," she says in the film. "The less I have to think about food, the easier it is to go about having a normal life and I don’t want to let anybody down so when I do have moments when I slip up, I feel very ashamed. What started the relapse was missing Wilmer. And when I feel lonely my heart feels hungry and I end up binging."

It takes true bravery to be honest with the world, and Lovato continues to do so through her personal posts, documentary, and music. As an artist with a pretty big following of young women, it's incredible to see her positivity and honesty.