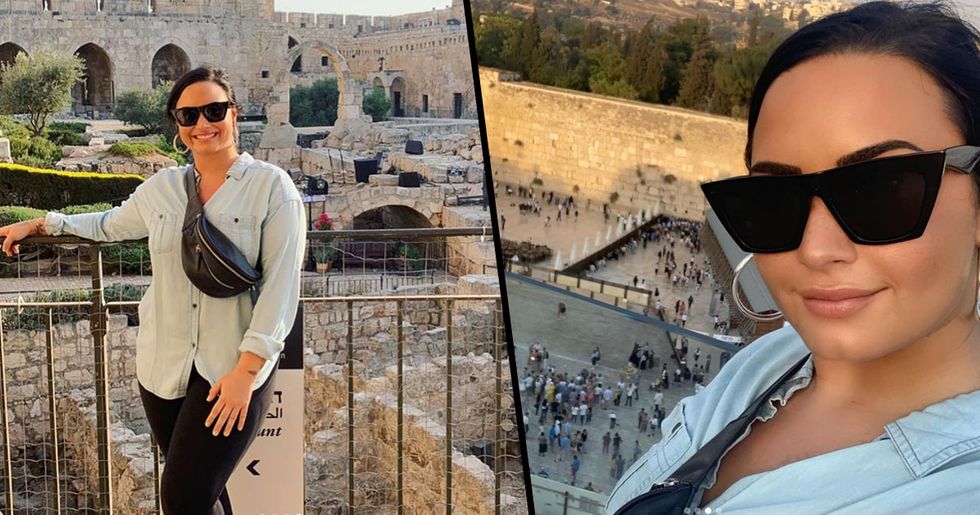 If you had to describe Israel in two words, what comes to mind? Blood-thirsty? Murderous? Scary? Those seem more accurate than "magical" and "spiritual," right? Not according to Demi Lovato, who was paid thousands and thousands of dollars in exchange for a couple of posts on Instagram to help boost levels of tourism for the "country."

After receiving tons of backlash from fans and friends alike, Lovato decided that she would clap-back at the people offering to educate her on the issue. However, instead of receiving the advice with welcoming arms, she proceeded to send abuse to her fans. Yikes. And double yikes. Even her apology was half-hearted and riddled with ignorance.

Get a grip, Demi.

Keep scrolling for all the details around this very controversial story.

Demi Lovato has recently become one of the most hated people on the internet right now...

I mean, if you're trending faster than Trump when it comes to controversial remarks, then you should really be worried.

Lovato has hit the headlines for her trip to Israel in which she described the visit as "magical."

Oh, Demi. Come on. You know better than this, right? Clearly not. The singer embarked on a journey to the land in hopes that she could reconnect to her Jewish ancestors, though she was raised as a Christian.

So, why is she facing so much backlash?

The reason why Israel is deemed such a problematic place is due to the ongoing conflict between it and Palestine. This fight has been going on for decades now, but recently, things in the Middle East have gotten worse due to the interference and funding from foreign countries.

How did it all begin?

Well, the history behind this issue stems all the way back the persecution of the Jews in Europe, who fled the continent and decided they wanted to establish a national homeland. And, unfortunately, they picked the Arab-owned land to settle. Obviously, that didn't sit well with the Arabs, but due to the influx of people fleeing there, they outnumbered the population already residing.

Then, with the help of foreign bodies, they received enough funding to try to eradicate the residents.

By ethnically cleansing the mainly Muslim population, the Israelis have managed to occupy a lot of Palestinian land. This wipe-out continues today, with the loss of many innocent lives in Palestine and surrounding nations in a bid to completely eradicate the Muslims from the area.

Now, do you understand why people were mad?

If you still don't, I'd advise you to do some research into the matter. There's no way that, in this day and age, that you can be completely clueless about the genocides going on all around the world, from the Palestinians, the Syrians, the Yemenis, and the Uighurs. Just say it with your chest: You don't care enough to be informed on the matter.

That's precisely the reason why people are attacking Demi...

How can you accept 150,000 dollars to go to promote the "goodness" of a country that is responsible for murdering millions of innocent civilians?

In her caption, she stated: "I am an American singer. I was raised Christian and have Jewish ancestors. When I was offered an amazing opportunity to visit the places I’d read about in the Bible growing up, I said yes." However, this next statement is what really bothers me.

"There is something absolutely magical about Israel."

What part of it is magical? Coming face-to-face with murderers or the beauty of stolen land? "I’ve never felt such a sense of spirituality or connection to God…something I’ve been missing for a few years now. Spirituality is so important to me…to be baptized in the Jordan river – the same place Jesus was baptized – I’ve never felt more renewed in my life." What a joke.

She then continues, saying:

"This trip has been so important for my well-being, my heart, and my soul. I’m grateful for the memories made and the opportunity to be able to fill the God-sized hole in my heart. Thank you for having me, Israel." Not only was this post problematic, but it's also extremely insensitive as it seems as if she's ignoring the fact that this country has so much blood on its hands for the sins it has committed. I mean, if you're feeling "connected" to this place, don't bother bringing God's name into it because it's such an insult.

Her second post paid homage to the victims of the Holocaust.

That's all good and well because those victims should be honored. However, what doesn't sit with me and millions of other people, is the fact that the leaders of this so-called "country" are now doing the same thing that was done to them but to another group of people?

The equivalent of this issue would be white people becoming slaves for black people as a form of "revenge" for slavery.

It's just not acceptable. Though people would have more outrage against that issue as opposed to his one because they feel like it doesn't concern them. Selfish thinking doesn't help anyone.

A trip to the Shalva National Center. None of these posts seem very problematic on their own, but when you find out that they promote a country with horrid values, it becomes a problem. Especially when you've been paid a hefty sum to "boost tourism." You're just a puppet.

Instead of being educated about the issue... she did this.

Lovato admitted that she was not educated on the issue though it's pretty hard not to be. I mean, if a whole (so-called) country approached you with a wad of cash and asked you to help them, there's probably a reason that they're doing it. No one, on their own accord, wants to visit Israel and that concept alone should have made you question "why?" But not Lovato, she took the money and booked her flight.

The worst part is that, when her fans tried to educate her, she was outraged.

She disabled the comments on all the photos and posted multiple stories (which have since been deleted) explaning that it was a "spiritual journey" as opposed to a political one. But, sorry, you're promoting a whole country, it becomes political. She talked about religion? Political. Everything is political in that realm.

She even went as far as sending voice notes to fans using some explicit language.

okay but if camila or shawn treated me the way demi lovato treats her fans, i would probably never stop crying. ima… https://t.co/TTDUtCuj07
— lucrezia (@lucrezia)1570122098.0

People have headed to Twitter to call out the star and for good reason, sharing the abuse she sent them over DMs and in the comment section of fan accounts.

After receiving so much backlash for her actions, she issued a half-hearted apology.

She said that she didn't mean to offend anyone and that she loves all of her fans. That's not the impression you gave yesterday, Lovato. Don't change your tune just because you lost a massive portion of your fanbase. From now on, Demi Lovato, you shall remain canceled until further notice.

She also wrote this:

"No one told me there would be anything wrong with going or that I could possibly be offending anyone." Firstly, it's your job to educate yourself on world issues. Wouldn't it be easy for everyone if we were all fed the right kind of information, Demi? Secondly, your fans let you know that you had offended them. You proceeded to degrade them and shout at them over voice messages. Messy.

Even celebrities such as Zara Larsson called her out.

You tell her, Zara!

Demi Lovato has had a rocky few years...

The only thing we can do is hope that she stops supporting murderers and sorts herself out for her own good. And if you want to read about just how problematic Lovato has been recently, keep scrolling. Things just aren't looking good for the "Sorry Not Sorry" singer.