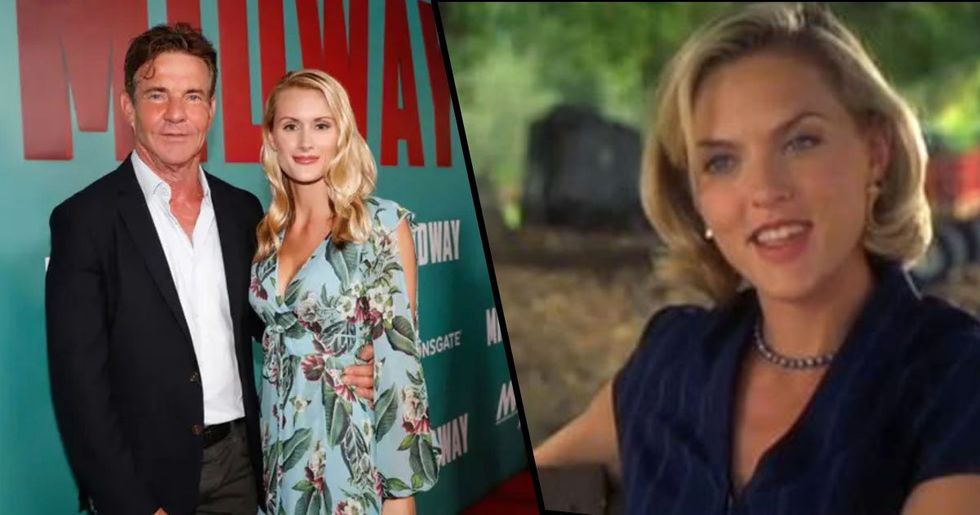 Hollywood actor, Dennis Quaid announced his engagement during an interview for his new movie, Midway.

Starring alongside Woody Harrelson and Nick Jonas, Midway follows a group of American pilots during a World War II battle. The movie was shot in Hawaii, which also happens to be where loved-up Quaid proposed.

However, the thing that has got people talking is the impressive age-gap between Quaid and his new fiancee. This is something that Elaine Hendrix, the actress who starred alongside Quaid in the 1998 adaptation of The Parent Trap, was quick to comment on.

But now, Dennis has finally responded. Keep scrolling to find out what he said...

Do you remember Elaine and Dennis from The Parent Trap (1998)?

The loved up pair were all set to be married until Quaid's twin daughters (both played by Lindsay Lohan,) decide to get rid of the "wicked step-mom."

You can't blame the twins...

Frankly, no-one watching The Parent Trap was rooting for the relationship between Meredith and Nick. Not just because we all wanted the nuclear family between the twins, Nick and his first wife, Elizabeth (played by the late Natasha Richardson) to work out. But mostly because of the age gap between Nick and Meredith.

The Lohan twins were not about to let that marriage go ahead.

Why? Well, because it was just wrong that their forty-something dad was going out was a twenty-six-year-old. Everyone agreed, Dennis Quaid's character was better off getting back with his forty-something first wife, Natasha Richardson.

The thing is though, it was bad enough eleven years ago when Quaid almost did the same thing in The Parent Trap.  Even then, Quaid was probably playing younger than he actually was.

Not that we aren't all very familiar with Hollywood men going out with much younger women... I mean surely it would be more groundbreaking if he was marrying someone his own age. I mean, imagine it... Breaking news: Dennis Quaid is going out with an OAP, we'd be collectively shocked, I'm sure.

The announcement has got people thinking about Quaid's past romances.

Dennis Quaid's first wife was actress, P.J. Soles. Soles has starred in numerous movies throughout her career, from Carrie (1976), Stripes (1986) and Halloween (1978). Dennis and P.J. got married in 1978, they stayed together for 5 years but divorced in 1983. Later they admitted they had both been pretty young when they decided to get hitched. P.J. was only twenty-eight and Dennis was twenty-four.

Dennis Quaid's marriage to Meg Ryan was the one we all remember.

Never again would Quaid date or marry anyone older than him. Ryan, who he married on Valentine's day in 1991, was ten-years-younger. When the pair first got together, Quaid was perhaps the bigger star. It was the mid-'90s when Ryan's career really kicked off. But the '90s was also when Quaid's career went into decline...

This wasn't the first movie the pair had starred in together. The previous year they had starred together in Interspace and while they were married they were cast in Flesh and Bone (1993.)

As Meg Ryan's success skyrocketed, their marriage burnt out.

Quaid still admits that he will always love Meg and was open with the fact that, at the time, he struggled to deal with the fact that her fame outshone him. Speaking candidly to the Independent earlier this year, he likened their relationship to that played out in the Cooper-Gaga picture, A Star Is Born, he said: "What I mean by that is that when we started, I was very much on top. She was just starting out. Then she had When Harry Met Sally and I took time out, and the roles were suddenly reversed in terms of where we were at, in our careers."

Despite what seemed like a messy divorce at the time. The pair clearly get on well now. Quaid revealed: "I'm very fond of her and we have a lot of fun. We spent 13 good years together. We had a kid together and we shared so much: she made my life."

Meg absolutely adores her son Jack, which she shares with Quaid. And it seems they still make time to watch the basketball.

Ryan began dating John Mellencamp in 2011, however, the pair broke up in 2014 after 3 years of dating Like any good Meg Ryan rom-com though, that wasn't the end of it... Come July 2017, Meg and John got back together and became engaged at the end of 2018. At sixty-eight years old, Mellencamp is 9 years older than Ryan.

After Ryan, Quaid hooked up with Shanna Moakler.

Just as his divorce to Meg Ryan became finalized, Quaid went public with model and actress Shanna Moakler. Moakler and Quaid dated for 8 months and this was big news for the tabloid press... given that Moakler was only twenty-six at the time and Quaid was forty-seven. I mean... can you imagine?

Quaid then got married to Kimberley Buffington.

Quaid met and married real-estate developer, Kimberley in 2004. With a seventeen year age gap, again Quaid made clear his interest in the younger ladies. See pictured above, alongside his son Jack. I don't think at that point, anyone thought he would go any lower.

Dennis and Kimberley had twins.

Through a surrogate, the couple had twins, Thomas, and Zoe in 2007. Although after a turbulent couple of years, with Kimberley filing for divorce, retracting it, separating and getting back together, the couple finally divorced for good in April 2018.

Jack Quaid is actually older than his dad's new wife.

When teenage Jack's dad married Kimberley, who was in her thirties, it might have been a little weird... but now, I wonder what twenty-seven-year-old Jack thinks about his old man proposing to a twenty-six-year-old.

The son of Meg Ryan and Dennis Quaid is now a successful actor in his own right. He's currently starring in the successful TV series, The Boys and has a lead role in the rom-com, Plus One (2019.) When he's not busy acting, Jack is found hanging out with his long-term girlfriend, actress, model and comedian, Lizzy McGroder. At twenty-eight, Lizzy is probably too old for Jack's dad, so he doesn't need to be worried.

Dennis admitted that this latest relationship has been a whirlwind.

The actor had not been dating graduate, Laura Savoie very long at all. The pair only hooked up in June of this year.

Quaid had been dating Santa Auzins until recently.

After his divorce, Quaid moved on to model, Santa Auzins, but the pair must have broken up sometime before June.

The internet is judging.

Perhaps it's something to do with the fact that the age gap between Dennis and his wives is just getting bigger and bigger...

Quaid seems none the wiser that the world is shocked at the age gap between him and his new spouse. He even joked about how much of a millennial she is when announcing the engagement.

You'll never guess what happened when Dennis pulled out the ring...

Congratulations to Dennis Quaid and his fiancee on their engagement. https://t.co/Rzg2VRzVcQ
— Matt Goldich (@Matt Goldich)1571683935.0

His twenty-six-year-old girlfriend was busy taking a selfie. Of course, she was!

I mean, that doesn't sound right does it?

This is exactly why I think Dennis Quaid's younger, The Parent Trap co-star decided to post her hilarious tweet...

Quaid does, in fact, have twins to his third wife, Kimberley. Who knows? Maybe pre-teens Zoe and Thomas will try and matchmake their parents back together as Lohan did...

Although of course, this adaptation is much weirder, because although the part of the step-mom is still played by a twenty-six-year-old, Quaid is twenty years old than he was back then.

This whole thing reminds me of an SNL sketch...

See what I mean? But I know, I know... love is love. Quaid has been quick to defend the relationship against all the haters.

Quaid has had his say.

Well aware that everyone has been mocking his engagement and questioning the massive age gap, Quaid has taken it upon himself to defend the union.

"I didn't go out looking for an age gap or someone really younger than me."

Speaking about the relationship in an interview with The Guardian, he was adamant that love just happened. Quaid went on to say: "You have no control over who you fall in love with. I don't fall in love easy. But I can't let what a few people think control all that."

Quaid is certain that this marriage will last.

After being married 3 times before, Quaid is certain that this marriage will stand the test of time. In his interview, he declared: "this is the final one, I know it is. I feel like I have a real partner in life."

Meg Ryan called off her engagement.

And now she's rumored to be going out with thirty-seven-year-old, Constance Wu. Okay I'm only kidding, but I mean come on, Dennis Quaid's girlfriend is twenty-six for crying out loud.

According to Quaid, the couple found the Parent Trap joke funny. To prove just how funny they found it Quaid said the couple "went to the Staglin Family Vineyard, where we filmed 'The Parent Trap,' I hadn't been there since 1996. So we went and they offered us the opportunity to get married there."

When asked if he would actually consider holding the ceremony there, Quaid responded: "Well, wouldn't you? For sure!"

Well, we can't wait for the pictures.

I'm sure it'll be one celebrity wedding to remember. I wonder if Lindsey Lohan will be invited... Continue scrolling to see the list of the shortest celebrity marriages of all time. Some of these might surprise you!