The actor called the shelter to arrange the adoption... | 22 Words 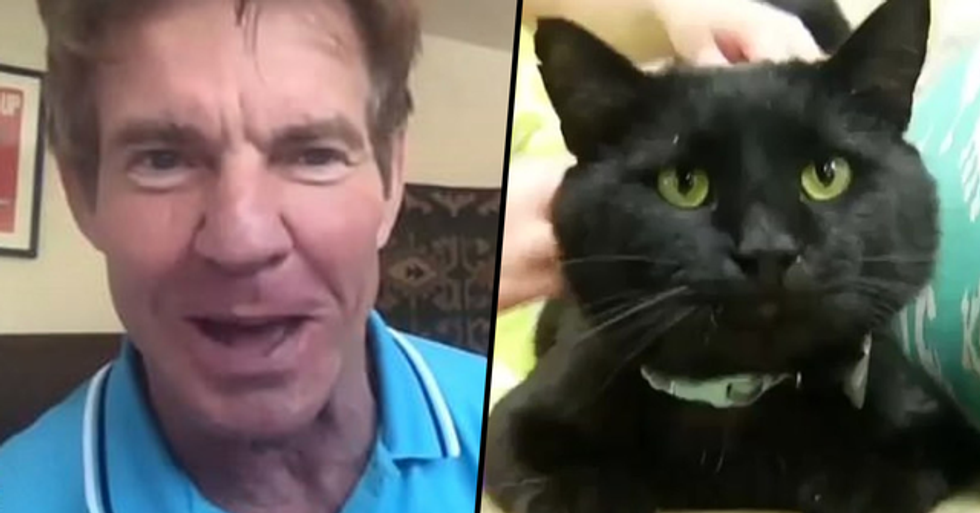 Dennis Quaid has made headlines this week after he adopted a cat with a rather familiar namesake...

Dennis Quaid the cat, who is 6-years-old, has been on the hunt for an adoptive parent for over a year now.

The Lynchburg Humane Society in Virginia has been desperate to find little Dennis a loving home...

Because he has a "big heart" and "likes to curl up on the couch"... What else would you want out of a cat?

The feline Dennis Quaid deserved nothing more than a forever home...

So, who better than to come forward than the real-life Dennis Quaid?

For reasons unbeknown to us, the cat had been named after the human Hollywood star, Dennis Quaid.

Most of you will recognize the Houston-born actor from his roles in hit blockbusters such as Parent Trap and Great Balls of Fire!.

He has been throwing his time and energy into something else entirely.

Yep, alongside Jimmy Jellinek, Dennis co-hosts the twice-weekly podcast, The Pet Show, wherein they discuss and chat about all things pets.

"Join us as we take the listener through the absolute latest in pet care, pet style, pet media, and celebrity pet influencers. In addition, we interview your favorite human, celebrity guests about their relationship with their pets both past and present. The result is a fantastic voyage into a pet-centric universe and the world’s first podcast with a purrrrpose."

So, when this passionate animal-lover caught wind of his feline counterpart...

He just had to do something.

The sixty-six-year-old first learned of the homeless Dennis when he was featured in a local TV news segment as a part of a "clear the shelters" campaign.

And, after seeing the forlorn feline on his TV, Dennis simply couldn't resist.

It was a match made in heaven.

"I just couldn’t resist. I had to," the human Dennis explained in an interview with 10 News last week.

The actor called the shelter to arrange the adoption...

But, of course, the staff initially thought that they had been pranked.

Danielle Ulmer, one of the shelter's workers, recalled the moment she received Dennis' phonecall:

"I was like, there's no way this is real, someone's pranking us!"

However, once Dennis convinced them that he was the real deal...

They sat down for a virtual Zoom meeting, where he was able to finally meet the feline Dennis.

Because who wouldn't love a black cat named after them?

The lucky cat is set to be picked up this weekend...

Where he will be brought back to Los Angeles from Lynchburg to live out the rest of his star-studded days.

And the human Dennis has big plans for the feline Dennis.

He couldn't be happier with his new companion, and noted:

"I’m out to save all the Dennis Quaids of the world."

The actor thinks the trend should stick, too.

"Maybe they should start naming animals in shelters after different celebrities and see who bites," he suggested with a laugh.

People have been delighted by the news...

So much so that some even want to change their own names to Dennis.

However, the actor hasn't always been in the public's good books.

Keep scrolling to read about the controversy surrounding his new wife...