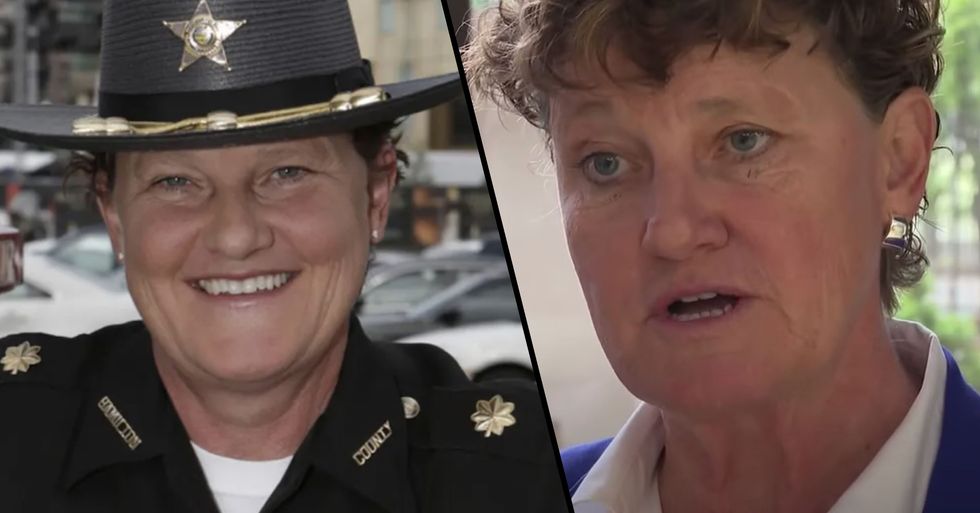 A Deputy Sheriff has had the best revenge on her boss who allegedly fired her for being a lesbian by completely knocking him out of the running for his own job.

Members of the LGBTQ+ community have unjustly had to fight against hate and discrimination for years...

And, incomprehensibly so, it's apparent that there are still bigotted individuals out there who can't view the world with an open and accepting mind.

Some people seem to be a couple of decades behind the times...

And simply cannot fathom the idea that 2 people of the same gender can fall in love and be happy.

Many of these people simply can't keep their bigoted opinions to themselves.

So many jobs have been affected because of this type of hate...

And even though it is unbelievable to imagine someone losing a job because of their sexuality, it sadly happens.

Here in the United States, there have been countless headlines in regard to this problem...

And the story of Charmaine McGuffey is the most recent one... and it is truly powerful.

Charmaine is from Ohio...

And for thirty-three years, she worked for the Hamilton County Ohio Sheriff's Office.

She actually became the first-ever woman to reach the rank of major in the department's history.

Yep, this is one successful woman...

And the fact that she is openly gay has absolutely nothing to do with her job.

But one man decided that this wasn't acceptable...

Sheriff Jim Neil made the decision to fire Charmaine from her position last year.

Charmaine has known Neil since college...

But Neil's views became increasingly conservative, including appearing on stage with Donald Trump at a MAGA rally in 2016.

So Charmaine not only decided to campaign for her rights, but she also decided to run for his job.

In addition to running for sheriff, McGuffey is suing the county and Neil for workplace discrimination and wrongful termination.

She said in a statement, "The current sheriff and I got into a pretty serious disagreement about the practice of him not holding officers accountable for use of force and harassment of women, female officers, and female inmates." "He fired me. So after about a year or so of contemplating, I decided I can do a better job than him."

Apparently, Neil apologized the day after Charmaine went public about what he had done.

Charmagne McGuffey was fired by the Sheriff because she was gay. Sheriff Jim Neill appeared at a Cincinnati Trump… https://t.co/7DHjt0GT0d
— chris evans (@chris evans)1588253980.0

"Quite frankly, my opponent has pretended to be a Democrat for many years now, when he's actually much more aligned with the Tea Party Republicans," she went on to say. "He tells people what they want to hear and then doesn't follow through."

And earlier this week...

Charmaine won her case. She defeated Neil in the Democratic primary, with him drawing just thirty-percent of the vote compared to her seventy-percent.

She spoke to local media...

"What makes the difference is the message I have, the message that I am a strong leader, that I embrace criminal justice reform, that I want accountability," she said.

She stressed her Democratic values...

"My values are different from Neil's values, and my values are very well aligned to the Democratic values."

And to make things even better, she has been endorsed as the Democratic candidate for Sheriff by the Hamilton County Democratic Party.

She will be facing Republican Bruce Hoffbauer in November.

However, Hoffbauer released a statement saying Charmaine's priority is "in advancing a progressive political agenda." Thankfully, she responded by saying, "What that statement from my opponent says to me is that he has a 1950's attitude - the same attitude that I came up [against] as a deputy under different sheriffs. It's the mass-incarceration attitude; it's the 'Let's lock 'em up and walk away'."

If Charmaine wins in November...

She intends to revamp the whole sheriff's office, starting with accountability and justice reform.

We wish Charmaine the best of luck with her campaign...

And it would be delightful to see some positive change come to her department. Make sure to stay posted for further updates.