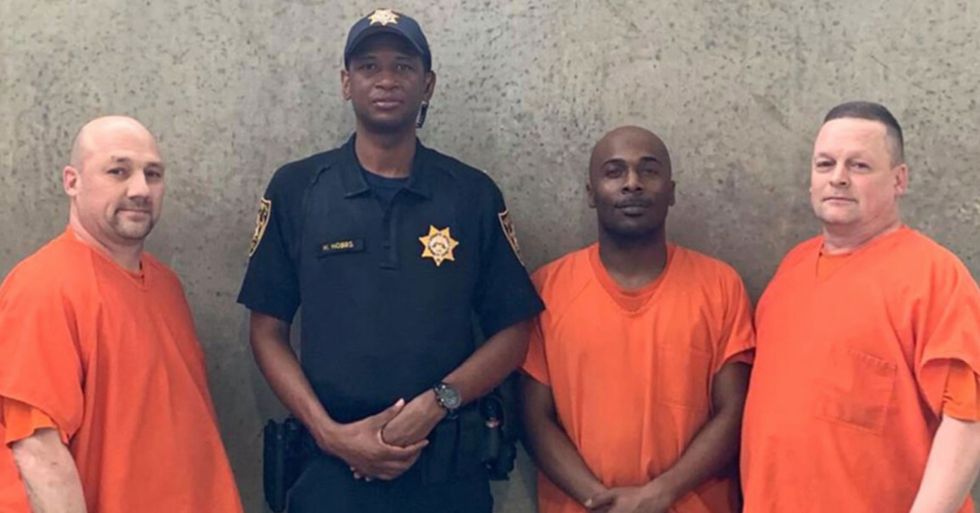 A deputy who collapsed whilst on duty in a county jail is now recovering thanks to the heroic actions of the inmates who helped save his life.

Now, this is a heartwarming story...

What is the first thing that comes to mind when you hear the words jail or prison?

Words such as "thugs", "violence", "crime", and "murderers" more than often come to mind for many.

The thought of encountering a prison inmate is terrifying for the majority...

But what people need to realize is that the vast majority of people in prison aren't blood-thirsty murderers who get their kicks from taking other lives.

Yes, prison is a place for criminals...

But people are people at the end of the day.

And recent in events in Georgia most certainly prove this.

Back in July, a deputy at the Gwinnett County Jail in Lawrenceville was on his shift patrolling when the worst possible thing happened.

The deputy, who has been named as Warren Hobbs, collapsed suddenly.

It initially looked like he was sleeping on the job on the day the incident occurred, but he had in fact lost consciousness.

Warren had fallen from his chair...

Which had resulted in him splitting his head open and bleeding - which alarmingly didn't wake him up straight away.

This is when something remarkable happened...

And it was all thanks to the inmates at the jail.

Inmate, Mitchell Smalls, was there when it happened and he quickly took action

"I started hollering and screaming and banging on the door to try to alert everybody to wake up," Mitchell later told Fox News.

It didn't take long for around sixty inmates to start making noise in an attempt to alert another deputy or member of staff.

The noise was that loud, it actually woke Warren who then struggled to get up.

The inmates were desperate to help Warren...

"It was sad because it didn’t look good at all, but the man had fight in him to get up," recalled inmate Terry Lovelace.

The inmates were encouraging Warren to open one of the cells so they could help.

Warren was able to push a button to open Terry's cell...

And Terry, along with his cellmate, Walter Whitehead, rushed to the deputy's assistance.

The inmates immediately aided Warren and they sat him down.

Walter then used the deputy's radio to call for help which arrived in seconds - which resulted in Warren being taken away to get assessed.

It was later discovered that Warren collapsed due to a cardiac problem...

But he has since made a full recovery and is ready to return to work... and that's all thanks to the help of the inmates in the jail.

Warren spoke of the life-saving actions of the inmates...

He doesn't recall losing consciousness but he vaguely remembers the inmates shouting of his name over and over.

After the incident, the sheriff’s office commended the inmates for the vital support they provided to Deputy Hobbs during the crisis.

"These inmates had no obligation whatsoever to render aid to a bleeding, vulnerable deputy, but they didn’t hesitate," the office wrote in a Facebook post. "Many people have strong opinions about law enforcement officers and criminals, but this incident clearly illustrates the potential goodness found in both."

Walter Whitehall, one of the inmates who helped Warren, then remarkably said:

"I don’t care if it’s a police officer or whoever it was. I will do whatever I can to save a man. I don’t want anyone to die."

People all around the world have been touched by the inmates' selfless acts...

And it just goes to show that human kindness exists everywhere.

The inmate's true colors shone through...

And people are calling for their sentences to be reduced for their heroism and kindness.

To see the amazing video of the heroic inmates in action...