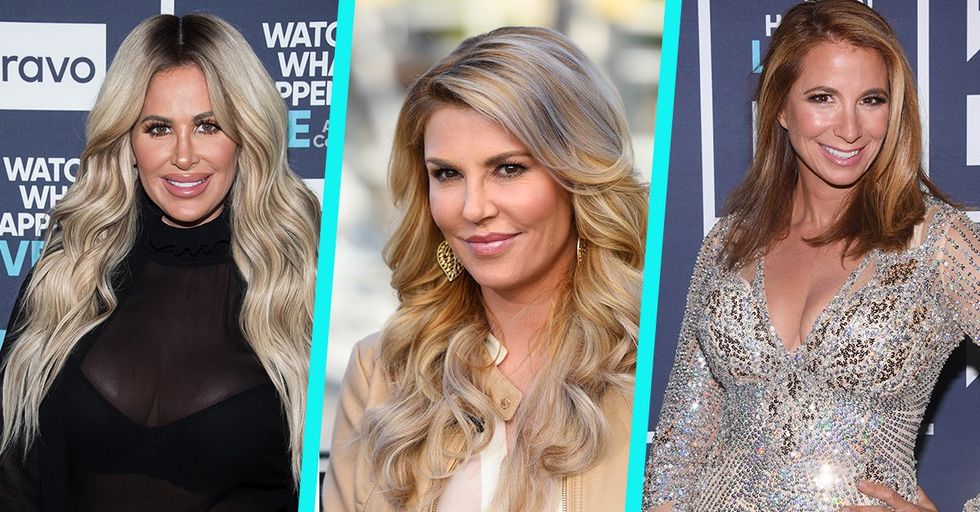 In times of struggle and confusion, we can always hold one truth to be self evident: Bravo’s ex-Real Housewives are desperate to get back on the show that made them (semi) famous. Here’s a list of the top ten Bravolebrities who would sell a kidney to collect a full time reality TV paycheck again.

This is a tough one, but hear me out. Jill Zarin suffered the tragic loss of her husband, Bobby Zarin, just last week when he lost his battle with cancer at 71 years of age. Then she used his funeral as a Bravo filming opportunity. Yikes. An original cast member of The Real Housewives of New York, Jill held the top spot among the cast of NY socialites for those early golden years of Housewives. Indeed, RHONY enjoyed its highest ratings during the seasons in which Jill appeared. But when her best friend (and struggling entrepreneur at the time) Bethenny Frankel started pulling ahead of Jill in viewer love, Jill got royally pissed. Bethenny even alleged that Jill forbid other cast members from filming with her, which led to a spinoff for Bethenny - and a swift Buh-bye! to Jill on the show. Since then, Jill has been ranting, raving, scrambling, and scraping for her spot back in the limelight. She even invited Bravo cameras to film her public “making amends" scene with Bethenny at Bobby’s funeral this week. Claiming that Bobby would have wanted it that way, Jill has ignored the public outcry about this very controversial move. Was it a true reconciliation? Or was it just Jill’s thirstiest grab for a spot back on Housewives yet?

Gretchen Rossi: To quote NeNe Leakes, the thirst is REAL.

After Gretchen was given the boot from The Real Housewives of Orange County, she has been clawing her way back into the franchise by any means necessary – even showing up for a cameo last season to spread nasty rumors about her arch nemesis, Tamra Judge. Now Gretchen is insinuating herself into photos like this one, which feature the rumored NEW OC Housewives who have been cast for next season. Will Gretchen join them? Oh, sweet Jesus. She sure hopes so. But remember: She comes as a package deal with Slade Smiley, so grab your anti-nausea pills, people.

Peggy Sulahian & Lydia McLaughlin: Ex-Housewives who like to play pretend.

Speaking of RHOC casting rumors, these two axed-Housewives made headlines recently when they posted this coy pic with the hashtags #killerseason13? #rhoc #watchout Um. You be fired, ladies. We know it. You know it. My husband, who doesn’t even watch these damn shows, knows it. So please stop reaching for the shady spotlight. It’s moved on to orange-r pastures. Like Gretchen and her friends.

Kim Zolciak-Biermann: She’s mad as hell and she’s not gonna take it anymore!

Kim is back on The Real Housewives of Atlanta this season, and she’s coming in hot and ready like a $9.99 pizza. With a wig. Since her “friend of" the Housewives status doesn’t grant her a full time paycheck, Kim figures it’s time to start the drama – with literally everyone. Evidence: She’s accusing Kenya Moore of having a fake husband, NeNe Leakes of being a drug addict, and Kandi Burruss of being a swinger who wanted to “lick her box" back in the day. Yup. Kim’s Don’t Be Tardy spinoff has been seeing declining ratings in the past year, so it’s no wonder the ex-full time Housewife is throwing nuclear bombs in every direction, hoping it scores her a peach. Even if it’s a rotten peach.

Phaedra Parks: Shady is as Shady does.

Oh, Shade-dra. How I miss your trifling ways on The Real Housewives of Atlanta! After accusing Kandi Burruss of rape last season (!!!), Phaedra tried to play victim by blaming it on rumors started by production. But Bravo was not having it. No, Sir-ree. They fired her, and she’s back to selling flat tummy tea on Instagram. Oh – and being a lawyer! Allegedly. Rumor is that Phaedra may appear in a cameo this season to apologize to Porsha Williams for involving her in the mess. No doubt she wants back on the show in a bad way too. According to sources, it ain’t never gonna happen. In the timeless words of our girl Sheree Whitfield, Hell to the nah nah nah nah nah.

Danielle Staub: From table flips to flipping the script.

She’s baaaaaaaaaack. And, yes, seeing Danielle on my screen every week during this season of The Real Housewives of New Jersey is JUST as scary as watching Poltergeist. <insert 13 screaming ghost face emojis here> But the “newly reformed" Danielle was only tossed a mere “friend of" role, which is not what she’s gunning for, long term. Danielle hopes that her new (and insanely strange) bond with HBIC Teresa Giudice will score her a full time role on the franchise, but that remains to be seen. In the mean time, we’ll leave her with the warm welcome her cast mate Dolores Catania gave her this year: “Welcome back, SCUMBAG!"

Siggy Flicker: She came, she sobbed, she skedaddled.

Oh, Siggy. What happened to you, girl? On her debut season of The Real Housewives of New Jersey last year, Siggy became a fan favorite. Her quirkiness – this is the woman who sucked soup through a straw after having a face lift! – was endearing, and she stayed away from most of the drama. Then came season two – and new Housewife, Margaret Josephs. Siggy Flicker became Soggy Flicker, and turned into reality TV version of A Woman On The Edge as she stuck out her tongue at grownups, screamed in people’s faces over trivial slights, and unravelled on social media like Kim Richards, circa 2016. It. Was. Frightening. Since filming wrapped, Siggy announced she wouldn’t be returning for another season of RHONJ – but I think we can all read between the lines. She was fired, yo. Let’s start the countdown to see how long it takes before she’s scrambling to get rehired. (Flipping over hourglass sand timer riiiiiiight now…)

Brandi, she’s a fine girl – what a good (House)wife she would be! At least that’s what Bravo execs were thinking when she was cast on The Real Housewives of Beverly Hills to stir up the sh*t with the Richards sisters and become Lisa Vanderpump’s ride-or-die. But things went south after Brandi and Lisa V had a falling out, leading Brandi to insinuate that Lisa did her dirty and, ultimately, got her fired. She’s been singing the same tune ever since her departure, and many believe she was the wronged party. Meanwhile, others hope to never see her wine-throwing ass back on their TV screens.

Eden Sassoon: Her hugs lasted ten whole minutes - and so did her fame.

Eden was brought in as a “friend of" the Real Housewives of Beverly Hills last year to – do what, exactly? Be a sober coach to Kim Richards? Dispel sage advice about throwing Xanax in one’s smoothies? Yeah. That didn’t work out too well for the Pilates instructor and daughter of famous stylist, Vidal Sassoon. Eden’s departure from the show hasn’t been working so well either. A simple troll of her social media accounts will reveal just how burned up she is about the show, and how much she allegedly “hates" it now. Hmm. Methinks the lady doth protest too much!

Peter Thomas: He got in women’s business, and he liked it.

Okay, okay. So Peter wasn’t and isn’t a Real Housewife of Atlanta. But damn if he doesn’t want that peach, baby! Ex-husband of Cynthia Bailey snatched as much camera time as he could when he was regularly featured on the franchise. And just when we were expecting to never see Papa Smurf again – BOOM! He pops up again this year to film scenes – and interview segments (Wtf!?). Peter is the Housewife that never was, but may always be. The rest of these chicks could learn a thing or two about this kind of staying power.