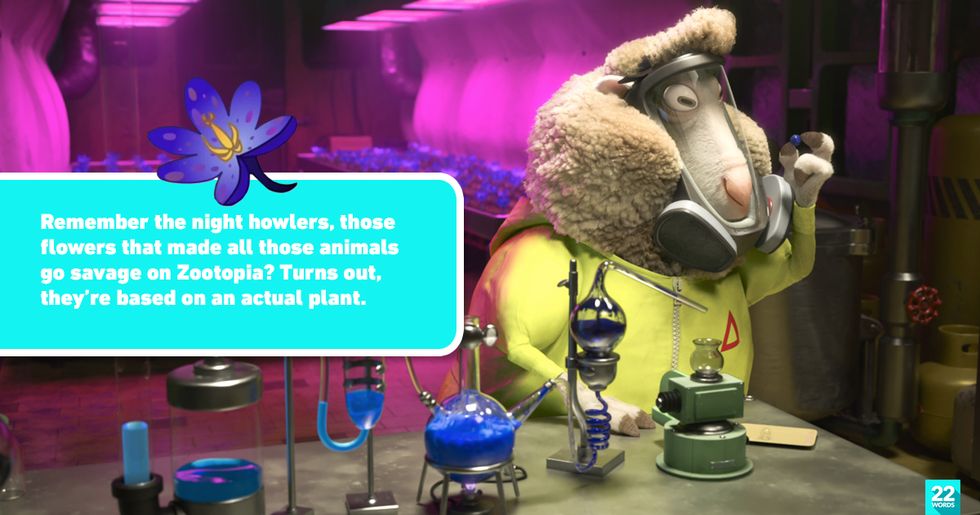 Even better, most of them have stood the test of time, mainly because the good folks at Disney are careful about prioritizing story over historical accuracy.

There are moments, however, where Disney films are accurate. Here are a few examples.

One of the most delightful parts of Pocahontas is Percy, Governor Ratcliffe's extremely pampered and persnickety dog. While the movie doesn't get most facts about the actual historical figure Pocahontas right, it is accurate to add Percy.
In the late 1500s, pugs were popular at European courts, beloved for their loyalty and companionship. They were even the official dog of the House of Orange. It is completely believable that Governor Ratcliffe would have a pug.

In the beginning of The Little Mermaid, Ariel explores a shipwreck, but is chased away by a shark. Turns out, that shipwreck is historically accurate.
According to the director of Texas A&M's Center for Maritime Archaeology and Conservation, the ship is a very accurate representation of a Spanish galleon, the sort of ship that would have sailed the ocean in the 1800s, which is the time The Little Mermaid is set in.

Remember the night howlers, those flowers that made all those animals go savage on Zootopia? Turns out, they're based on an actual plant.
The autumn crocus, which, btw, looks EXACTLY like a night howler, is highly toxic and can cause cardiac arrest, multi-organ failure and bloody vomiting. It won't turn animals savage, but it could very well kill them...

One of the most wonderful things about watching Ratatouille, a truly excellent movie, is all the little details that went into crafting the chef's kitchen.
Turns out the animators spent a long time in actual restaurants learning all the sounds and mores of professional kitchens. This means that most of the things in the kitchen, all the way down to the way the chefs chop onions in the film, are accurate.

Disney took a lot of liberties with Hercules story in the eponymous animated tale. Yes, Hercules is based on a mythological figure, but there was enough deviation from the classical tale for Greek mythology buffs to go "huh?"
One way the film remained true to the original tale were all the labors he had to complete to become a true hero, and that includes defeating the Nemean Lion (above looking suspiciously like Scar), the Erymanthean Boar, and the Stymphlaian Birds.

6. Those biscuits on Brave

Brave is one of the most delightful Disney movies ever. Watching Merida fulfill her quest is a joy, as is watching her try to corral her naughty brothers. While Merida's story is not real, one part of it is very historically accurate - those biscuits.
Tipperary biscuits are a traditional Scottish dessert and they're made of flour, butter, several spices and strawberry jam. Add a maraschino cherry on top and you've got a super delightful desert.

7. The names in The Emperor's New Groove

Who doesn't love The Emperor's New Groove? The comical Disney musical has enough fun and excitement to get anyone dancing and having a good time. But did you know the names of the characters in the films were based on actual Incan places and concepts?
The name of Emperor Kuzco comes from the name of the ancient Incan capital, Cuzco, which is what is now in modern day Peru. Also significant is the name of his sidekick Pacha, which means "earth." Pacha literally grounds the flighty Kuzco.

One of the coolest things about Moana – other than the entire film, of course – were all the tattoos. While Maui's tattoos weren't a hundred percent legit, being that he is a mythical figure, Moana's father's were surprisingly accurate.
His tattoo is called a pe'a, and would take over 10 (very painful) days to complete. Still, it was necessary if a man wanted to become a chief. Another historical accuracy were the traditional round Samoan houses called fale, which stuck close to the originals.

9. Mulan is based on an actual Chinese legend

Disney's Mulan was an epic of girl power that also gave us one of the hottest Disney princes ever in the form of Li Shang. But did you know it was based on an actual legend?
The legend of Hua Mulan dates back to the 6th century, when the Ballad of Mulan was transcribed in the Musical Records of Old and New. In the legend, Mulan is working at her loom when a male from her family is called to serve the army. Since her father is elderly, and her brother is just a child and she is already well versed in martial arts, Mulan takes their place.

10. Hatred of the Romani

The Hunchback of Notre Dame is one of the most gut wrenching Disney films ever, mainly because you couldn't help but mourn the fate of poor Quasimodo, and curse the dastardly Judge Frollo. While the tale is based on the French novel by Victor Hugo, many things in it are accurate.
One of the worst things is the way Judge Frollo and the rest of the citizens treat the Romani, who they refer to as gypsies. Historically, the Romani have been reviled in Europe as itinerant thieves and swindlers, and were thought to have been driven out of Egypt for harboring the baby Jesus. In actuality, the Romani are descended from the dalits or so-called "untouchables" of the Indian subcontinent.