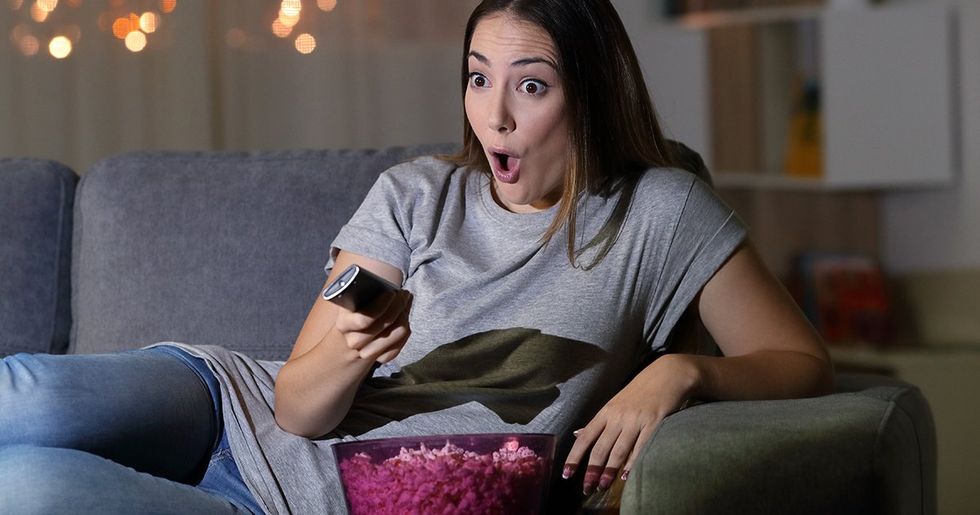 A lot of times, we think of the director as the artist behind a movie, but it actually takes an incredible number of people to make a film, from key grips to cinematographers to script coordinators to best boys. With all those brains working on a single piece of art, is it any surprise that movies come out as well-thought-out as they do?

A lot of movies are so crammed full of details that it'd be impossible to catch them all with one viewing. But to save you a little bit of time, we've collected here some of the best movie facts from Reddit's /r/MovieDetails, a subreddit where users find and post their most interesting observations about their favorite films.

Scroll through for some interesting movie facts from the likes of Avengers: Endgame, Star Wars, The Truman Show, and more...

This guy knew what he was doing.

In Avengers: Endgame, Captain America takes four Pym particles. Two for him to return to the present with Stark and two for him to go live out his life with Peggy in the past, eventually returning to the present. - sportsfan2000xx

I had a bunch of Rugrats videos like this.

What a good boy.

In Up, Dug is the only dog to successfully track down the Tropical Bird because he is the only Hunting Dog (Golden Retriever). All the others are Guard Dog breeds. - JohnnyCharles

How did this guy not figure it out?

In The Truman Show, the Moon is briefly illuminated by the "lightning", hinting that it's much closer that it should be. - Messire_Lie

I hate what this movie's done to me.

One of 100 reasons this is the best Spider-Man movie to date.

In Spider-Man: Into The Spider-Verse, when Miles Morales electrocutes Peter B. Parker, it illuminates his nervous system instead of the usual cartoon trope of his skeleton. Being much more scientifically accurate.

Did he just have an open Thursday?

In Deadpool 2, one of the rednecks talking about toilet paper is actually Matt Damon in four hours worth of prosthetic makeup. - CrashOverride24

If only she would've taken the time to appreciate the art.

In The Incredibles 2, the painting in Helen’s hotel room is an illustration of her separation from the family. - Justsoinsane

This movie's sound-mixer was as important as any of its stars.

If you watch the film with headphones or properly placed surround sound speakers, every time we see Baby in Baby Driver wearing only one of his headphones, you’ll hear the song he is listening to through that ear only. - TostinoTarantino

A decades-long mystery is finally solved.

Ever wonder what happened to Kevin's plane ticket in Home Alone? - bobcobble

Forrest Gump never blinks while playing ping pong, as he was told the trick was “to keep your eye on the ball." - stsawyer97

You see, Osmosis Jones takes place in a human body.

In Osmosis Jones a statue of a sperm cell can be seen that is labeled Our Founder. - HellotoHorse

He also gets more red on him.

In Shaun of the Dead, the films key events are laid out by Ed before the zombies rise. - SirNomoloS

He's just a dog chasing cars — he wouldn't know what to do with it if he caught one.

In The Dark Knight, the Joker says he hates schemers and claims he's a man without a plan. Later on during the boat scene, he is shown reading his monologue from a notebook, highlighting his hypocrisy. - bob1689321

In Cloudy With a Chance of Meatballs, every president on Mount Rushmore except Abraham Lincoln gets pied directly in the face. Lincoln takes a pie to the back of the head, which is how he was assassinated.

Seriously Truman, get your head on right.

In The Truman Show, the travel agent kept Truman waiting because she has never needed to show up for work before. Also she is still wearing her makeup bib since it was a rush job. - TastesGreatIceCold

Filmmaking ingenuity at its finest.

They couldn't hide the camera in the doorknob's reflection of this scene of The Matrix, so they put a coat over it and a half tie to match with Morpheus.' - P8ntBal1551

In The Avengers, there is a small screen showing the heat signature in the room where Loki is being held which shows that he has a cold body temperature because he is a frost giant. - cp_r0bb

It's important to remember that, member of the Order or not, Snape treated Harry horribly and was a weirdo creep towards Lily.

In Harry Potter and the Deathly Hallows Part 2, Snape is still helping the Order of the Phoenix when he re-directs McGonagall’s spells to the Death Eaters behind him. - davidefinitely

But it was only a flesh wound.

In Monty Python and The Holy Grail, the Black Knight’s coat of arms is a boar... a creature known for ignoring deadly wounds to keep fighting. - NorgeViking

The fact that they sometimes wore shoes that showed their toes also places this movie in the Quentin Tarantino-verse.

Gotta give him points for trying.

In Toy Story 2 when Al is about to hang up with the Japanese Toy museum buying Woody. He says “Don’t touch my mustache". This is him mispronouncing. “どういたしまして" (Dōitashimashite) which means You’re Welcome in Japanese. - monkeynicaud

The cover of The Princess Bride 20th Anniversary Edition DVD can be read upside down as well as right side up. - Proteon

Ohana means "family," but maybe it should mean "sacrifice"?

In the movie Lilo and Stitch, you see that Nani was a surfing star, but dropped everything when her parents died to take care of Lilo. - alexiarmiller

A man of his word.

In Night at the Museum: Battle of the Smithsonian, after Kahmunrah says “I could kill your friends in the blink of an eye", he does not blink once on screen for the remainder of the movie. - Chipsmc3

Would he have been better than Jake Gyllenhaal?

In Sam Raimi’s Spider-Man 2, Bruce Campbell portrays a snooty usher at a play and says the line “... it helps maintain the illusion". Bruce Campbell was supposed to play the villain Mysterio, the master of illusions, in the unreleased Spider-Man 4. - succumfucc

Those are the teams they'll eventually be playing for.

Padme and Vader represent the sigils of the Rebel Alliance and the Galactic Empire in these scenes. - MoeMetA

In Rampage, when Dwayne The Rock Johnson's character signs "it's me," he uses the American Sign Language symbol for "rock." - 4lexbr0ck

Clarice is not super coachable.

In The Silence of the Lambs, Clarice fails an FBI drill by forgetting to look over her left shoulder when entering a room. Later, she misses a hint to her suspect's identity by making the same mistake.

As if Ash didn't have enough to deal with...

In Evil Dead II, Freddy Kruger's glove can be seen hanging by the door in the food cellar. - Cosmicacid

Isn't it already enough that toys are alive? Now we've got to deal with clones in the Toy Story universe?

All of Andy’s friends are Andy as well from Toy Story. - Lukkac