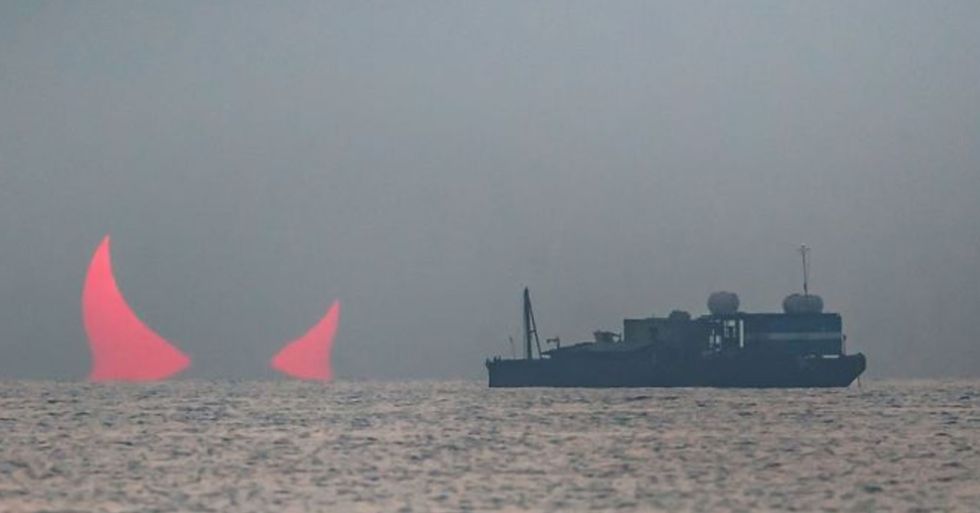 There's nothing quite so relaxing as a beautiful sunrise. Seeing the world come to life after the darkness of night is enough to warm anyone's heart and induce undeniable feelings of hope. But one sunrise image with a difference has gone viral this week - and let's just say it's more frightening than calming!

It's amazing what the earth can do when left to its own devices.

And there's one sight the world never gets tired of.

In spite of the fact it will one day explode and obliterate us all, we have a lot to be thankful to the sun for.

Not only does it provide the means for all of life on earth ...

But it also looks damn good, too!

And there's one time of day when it truly shines (no pun intended).

Sunrise is the time when you can really get some beautiful views of that big ol' ball of fire.

Because the latest image of a sunrise to go viral is a little bit more terrifying than the usual fare.

It all came about because of an eclipse.

It turns out, when a part of the sun is covered up, some pretty creepy shapes can be made.

Some more frightening than others.

And in this image, the sun has, unbelievably, morphed into a perfect set of devil horns. Yikes.

People of the internet are going wild for the image.

We have to say, it's pretty spectacular - if not a little bit fear-inducing!

Some have made this point.

While others made this reference.

Any other HP Lovecraft heads out there?

While others had this suspicion.

Is there some sort of glitch in the Matrix?

Well, the short answer is no.

It's all a clever trick of astronomy, captured by photographer Elias Chasiotis.

"Astronomy has attracted me since I was a kid."

"I've been an amateur astrophotographer for the last 15 years as well. I took these photos in the coastal city of Al Wakrah, Qatar, on the morning of December 26, 2019, when an annular eclipse was in progress," he told Bored Panda.

"I hoped that optical effects like inferior mirage would be visible and I was lucky enough to capture them."

"The weather conditions didn’t look good in the beginning as there was a lot of haze and low clouds in the southeast."

"I was worried that nothing would come out of the eclipse."

"However, when the sun finally began to rise, it looked like two separate pieces, some sort of red horns piercing the sea."

"It soon took the form of a crescent, with the so-called ‘Etruscan vase’ inferior mirage effect visible."

"Due to its shape, the phenomenon was nicknamed the ‘evil sunrise.'"

The two red peaks over the sea are unsettlingly reminiscent of Satan's headpiece.

But Chasiotis didn't find it creepy at all.

"It was indeed the most stunning sunrise I have ever seen! The only problem was that I missed the annular phase of the eclipse ('the ring of fire') due to the clouds. When the sun reappeared, it was a crescent again. Despite being clouded for the main part of the eclipse, I felt very rewarded."

To be fair, others didn't see the devilish resemblance, either.

Some people just have a one-track mind, hey?

Fancy seeing more beautiful images of nature? Scroll on for our edit of fifty of the best. God bless Mother Earth!