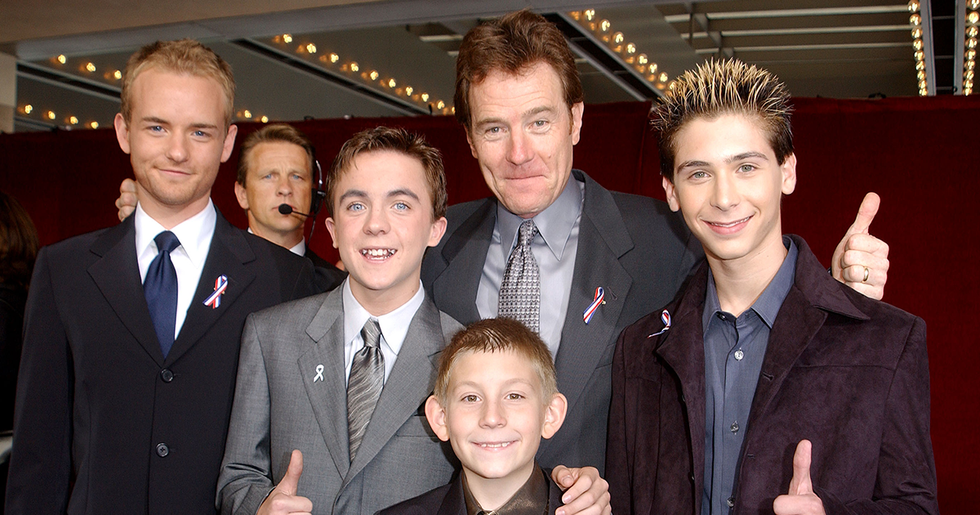 Calling all Malcolm in the Middle fans! It's been a long while since the critically acclaimed series aired--over 10 years, in fact. If that doesn't make you feel old, consider this: the kid that played Dewey is all grown up now! Erik Per Sullivan set up an Instagram account in 2016, and fans of the show were shook.

Not only is Sullivan now 27, but he also looks totally different. And he's not the only one! Read on to catch up with the show's entire cast. Because let's be honest, we really only kept up with Brian Cranston over the years. But if you were a kid in the early 2000s, odds are you watched Malcolm in the Middle. So get ready for a blast from the past!

Raise your hand if the name 'Malcolm in the Middle' give you major nostalgia.

But it was iconic in its time.

The show, over its 7-season run, nabbed a Peabody Award, a Grammy, and 7 Emmys.

At first, the show focused mostly on its title character.

Malcolm, the third son out of four (and eventually five) was a genius-level kid dealing with school and his dysfunctional working-class family.

After a couple of seasons, the show branched out to focus on the whole family.

And that includes Dewey.

Remember Malcolm's little brother? Intelligent in his own right--and often involved in his brother's mischief.

Dewey was the youngest in the family.

That is, before little brother Jamie came along.

Dewey's actor, Erik Per Sullivan, was 8 when the show first aired, and 14 when it ended.

And those early days were filled with shenanigans.

With those four brothers, how could there not be?

But is the name really Wilkerson, or is it...Nolastname?

And Erik has mostly kept a low profile over the years, not doing much acting.  He voiced Sheldon the Seahorse in Finding Nemo, and starred in Twelve in 2010.

So nobody really knew what he looked like as an adult.

But Erik started up an Instagram account...although, sadly, he really doesn't use it much!

Now, we do catch glimpses of the other main cast members.

They've changed over the years, too. So let's catch up with everybody else, first!

Bryand Cranston is the most obvious one.

We all know he's been busy; most notably starring as Walter White in Breaking Bad.

Which is a pretty big switch in characters.

Way back when, Cranston played bumbling and cowardly dad Hal in a role far more comedic than his stint as Walter White.

Now, how about Malcolm's eldest brother?

Christopher Masterson played Francis, oldest son in the family and juvenile delinquent. Although, to be fair, he's straightened himself out by the end of the show.

And as of 2010, he's transitioned into deejaying.

We already got a glimpse of Justin Berfield.

Way back when, he was older brother Reese, who was always scheming and picking on his brothers. Oh, and he was also a culinary prodigy.

He has also switched career tracks.

Justin is a producer now, and he's also a big fan of fly-fishing!

And what about Lois?

The family's smart and stubborn matriarch was played by actress Jane Kaczmarek.

Here she is now:

Kaczmarek has continued acting, in film, television, and theater.

And, of course, we can't forget Malcolm himself.

Frankie Muniz played the genius "Krelboyne" who, at the end of the series, graduated and made it to a prestigious college.

Aka, one of his more recent television appearances was on Dancing With the Stars! He's also taken breaks from acting to join bands as a drummer, and begin an open wheel racing career.

But did you know he's actually lost some of his memory?

In 2012, Muniz suffered what was effectively a 'mini stroke.' While on Dancing With the Stars in 2017, he revealed that he'd suffered significant memory loss from the event--including memories from his child acting days.

And now, it's time for Dewey himself.

*Drum rolls* Get ready, because that cute little kid is now a fully grown adult (and you might get a little shook).

Here he is now:

Look at that change! Dewey is all grown up, now.

From time to time, he'll post a classy picture.

And fans have been pleasantly surprised by Erik's transformation from cute kid to...cute adult.

Don't take our word for it.

Wow he ended up cute ?? -dangerdakota

He got shoutouts left and right.

Didn't even recognize you! That's awesome for you! Fame and back to choosing if you want to live a public life again! Glad everyone is doing well. -renegadesci

People are actually pretty invested in his wellbeing (which is really sweet!)

Glad to see your still alive and thriving Erik! You and the rest of the cast hold a special place in my heart -trm.54

That's Erik with his TV-brother Justin Berfield, who played Reese.

Someone pointed out they're kinda twinning.

Why do you look so similar it looks like someone came up to you and said “say cheese!" -mattiedecker27

And some people just want more 'Malcolm in the Middle.'

We need a new Malcolm in the Middle series. -ifunnydewey

It's kinda weird to think about Dewey having a beer, isn't it?

What the heck?! That likeness is absolutely uncanny!

He's not really a public figure, though.

So we don't know too much about his life these days, but it seems like he's doing well!

We do know this much:

In 2007, he starred in Mo, a movie about a boy with Marfan syndrome.

Only briefly, but he had a role in the film Twelve. After had, his social media presence gets pretty sparse...but at least we've got Instagram!

But he graduated college!

His dad has a restaurant in Massachusetts.

So, the Alamo (his dad's place) is probably the closest you'll get to seeing Erik IRL. Unless coincidence is really in your favor one day, that is.

All in all, this family has changed a ton.