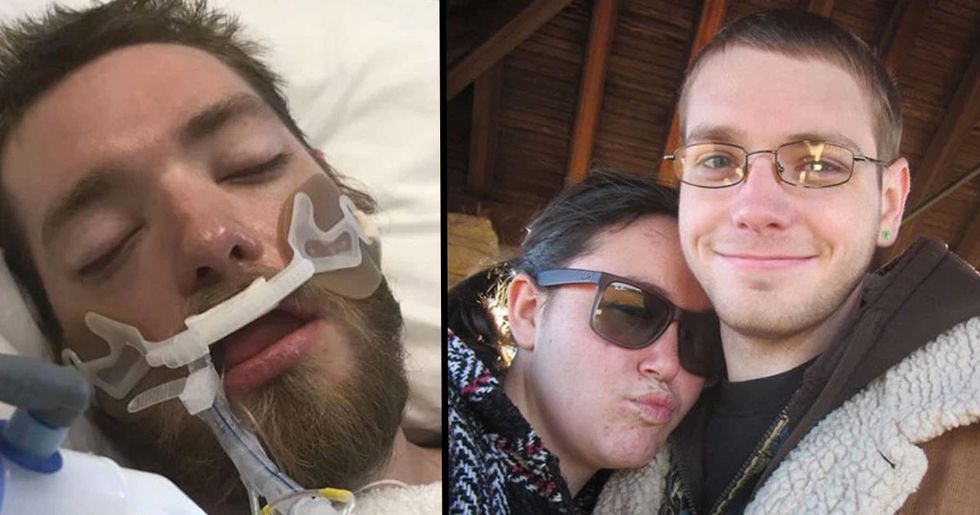 It's never nice to hear that someone has died young, with life and all the adventures that come with it still stretching out in front of them. Hearing about a preventable death is even harder. And hearing about a death that occurred as a direct result of the USA's inadequate healthcare system really takes the biscuit.

This time last year, Josh was juggling life's responsibilities just like any other American his age.

He had a steady job working as a supervisor at the Northern Virginia Dog Kennels and was putting a little money aside each month to marry the girl he loved, his fiancée, Rose Walters, twenty-seven.

It's hard enough trying to balance rent, taxes, and bills, nevermind the cost of the dream wedding on top of all that.

But Josh and his fiancee, Rose, were determined that, with hard work and dedication, they could have it all. The pair were planning on having a rustic barn house wedding in October. Nothing too fancy but, still, something special.

His fiancee, Rose, also has type 1 diabetes. The condition is the most severe of all diabetes types and requires doses of insulin to be injected into the bloodstream every day.

Thirty million people live with diabetes in the U.S. and 1.25 million of those people have been diagnosed as type 1.

The number of those living with it is on the rise.

Although there are 1.25 million people currently in the U.S. with type 1, by 2050, it is estimated that the figure will have risen to 5 million. According to national statistics, 400,000 people are currently being diagnosed with it each year.

What happens when you don't have insurance?

As Josh Wilkerson's mom stated following her son's untimely death, "when it comes to type 1 diabetes, people are facing unthinkable decisions — between the costs of living and their very lives."

At twenty-six, Josh was no longer covered by his stepfather’s private health insurance.

This meant that his life-saving insulin would not be subsidized, and he would be required to pay $1,200 a month for the amount that he needed.

Earning $16.50 an hour at the dog kennels was never going to cover it.

In order to try to have a handle on the situation, Josh began rationing his insulin. I mean, what else could he do?

Breaking Bad would have never happened if there was a viable healthcare system in the U.S.

Remember what happened in Breaking Bad? Bryan Cranston's character, Walter White, only started cooking meth to pay for his cancer treatment bills, which he couldn't possibly hope to afford with a pregnant wife, a disabled son, and a teacher's salary.

It would be impossible to make a British version of Breaking Bad.

I'm not saying that Josh Wilkerson should have become an international drug lord...

What I'm saying is that, if America does not review its healthcare laws, people will continue turning to crime to fund their necessary prescriptions and hospital fees, or else they will end up dying like Josh.

The dangers of rationing insulin.

Josh sent his mom a message instructing her not to worry. I mean, what else could he say? It's not as if he wasn't taking the required amount of insulin to be cool, he was rationing it because he had no other choice.

The worrying began when Josh's child insurance ran out.

In a blog post written by his mother, to raise awareness of the epidemic, she explains that after his child cover was up, "he couldn’t afford the maintenance or supplies for his insulin pump, so he had to make the switch back to syringes."

The dangers of ReliOn.

When Josh's doctor heard that he had started rationing his insulin, he recommended that he tried switching to ReliOn. ReliOn is an over-the-counter brand of what is known as “human insulin." This stuff takes longer to become effective in the body, but only cost $25 a vial in WalMart.

With the soon-to-be newlyweds only just scraping by paying their bills, covering rent, and saving for the barn wedding, you can understand why they opted for the cheaper alternative. Especially with a doctor recommending it!

Side effects of ReliOn.

The trouble is, the more affordable a medication, the less effective it can be. Josh's mom, Erin Wilson-Weaver, told The Post: “It didn’t work for his body." The drug ended up causing Josh to have mood swings, severe stomach aches, and actually increased his blood sugar.

What started as a stomach ache proved fatal.

In June, Josh had to stay overnight at the Kennels for a week while his employer was away. On his second night, he made sure that all the dogs were alright before face-timing his fiancee before bed. Rose recalled how he had complained about his stomach pains and promised to take his insulin after she voiced concern.

When Josh failed to answer his phone, Rose grew worried and drove up to the kennels. It was there that she found him unconscious on the floor. "I just remember smacking him on the face, saying, ‘Babe, wake up. You have to wake up.'" Sadly, Josh never woke up. He was sent to the hospital and died five days later.

The future for diabetics in the U.S?

Colorado is paving the way. In May, the governor of Colorado signed legislation capping insurance co-payments on insulin to $100 a month. This would prevent stories like Josh's from happening again. The Trump administration are saying that they will find a way for Americans to legally import cheaper medication from Canada - but that doesn't really solve the problem, does it? The best we can hope for (besides a free healthcare system - hello!) is for advances in the world of science. Researchers are, at this very moment, attempting to create insulin-producing cells, which could be put into the body of a diabetic and basically cure the disease. Well, we'll see, eh? But if it's not diabetes, it's cancer, it's a freak accident, it's gradually failing mental health - there are many diseases, situations, and conditions out there that shouldn't bankrupt decent American's. We can't let what happened to Josh Wilkerson go unnoticed. We can't let it happen to anyone else. The ridiculous cost of healthcare in the U.S isn't the only problem that the system is facing. One woman pointed out the horrific differences between healthcare between men and women and it seems pretty clear that something needs to be done. Keep scrolling for more on that story.