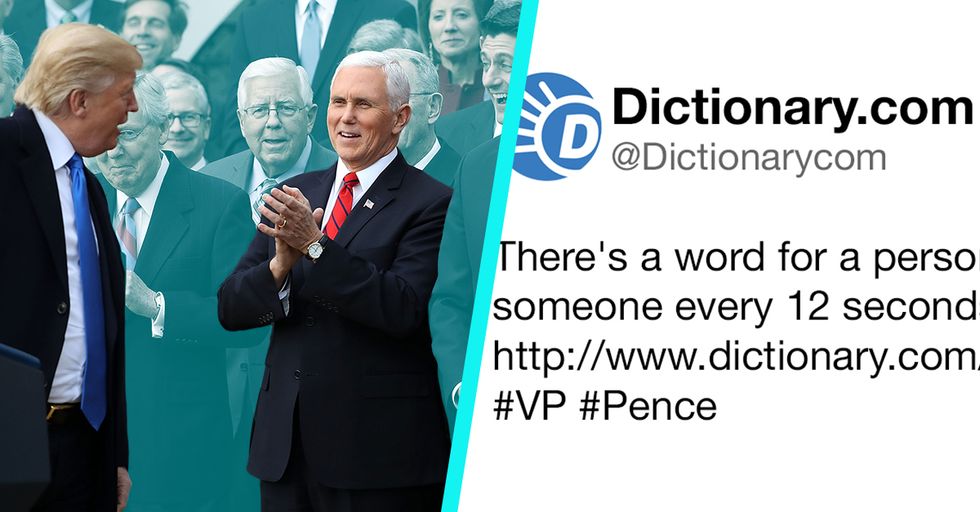 When you're a public figure, you know you're gonna get flak from some haters every now and again. Even J.K. Rowling has to deal with Twitter trolls. No public figure — beloved or reviled — is safe. We even get a get our own fair share of salty comments on 22 Words. Not that it hurts our feelings, or anything (*wipes tear*).

Anyway, you expect to get trolled by people, but you might not expect the dictionaries to come for you. But that's exactly what happened after Vice President Mike Pence was very flattering toward Donald Trump during a recent cabinet meeting.

Pence and Trump might not see eye-to-eye on everything, but the two men are cut from the same cloth.

(The same racist, homophobic, sexist cloth. Cloth you might expect to see draped over your grandma's old, dusty furniture that nobody likes, but which somehow ended up in the house anyway.)

So it probably comes as no surprise that in a recent cabinet meeting, Mike Pence spoke very highly of President Trump.

Over the course of 3 minutes, Pence paid Trump a total of 14 compliments. That's one compliment every 12.5 seconds. That is a nearly unfathomable amount of compliments to pay any person, but it's especially impressive when the person you're complimenting literally just joked about a congressman losing weight after being shot. Among Pence's compliments were the statements, "You've unleashed American energy" and "You've spurred an optimism in this country that's setting records." We would say something very funny about these comments, but we are too busy gagging.

They saw an opportunity to educate people, and they took it. "There's a word for a person who would praise someone every 12 seconds," Dictionary.com said.

Ooh! Ooh! We know this one!

Alas, "buttkisser" was not the word Dictionary.com went with. (Although we contend it would have been just as correct.)

No, instead, Dictionary.com shared a link to the definition of "sycophant."

That is, "a self-seeking, servile flatterer; fawning parasite." As you might imagine, responses to Dictionary.com's epic tweet were, um, mixed...

Many people, including this guy named Neal, were upset that Dictionary.com was "getting political."

Because even providing a definition from a dictionary can be a political statement these days. Apparently. Neal then said he'd take his dictionary-ing business elsewhere, to Merriam-Webster.

Merriam-Webster is kinda the OG of trolling politicians with ultra-timely definitions. (A fact that we never thought we'd be writing about in 2017, but here we are!)

Most people, though, were pretty darn impressed.

You have to admit: It was a pretty epic mic-drop moment for good ol' Dictionary.com. (In case you're unfamiliar with the term "mic drop," we'll refer you to our friends at Dictionary.com, who define it as "something, especially a statement or action, that displays such a bold confidence.")

Both for providing much-needed definitions to words we don't know and for refusing to silently watch the world crumble. It may seem small, but Dictionary.com tweeting about the word "sycophant" (and making "complicit" their Word of the Year) is exactly the kind of thing people need to see right now.

As for those of us at 22 Words, we'll keep using Dictionary.com.

@Dictionarycom I just followed you because this and your pinned tweet. finally, a dictionary with a conscience ☺️ #yippeekayyaymutha..
— NorthernLala (@NorthernLala)1513914232.0

And Merriam-Webster! Because words are important, and so are acts of resistance. (That is, "the act or power of resisting, opposing, or withstanding.")