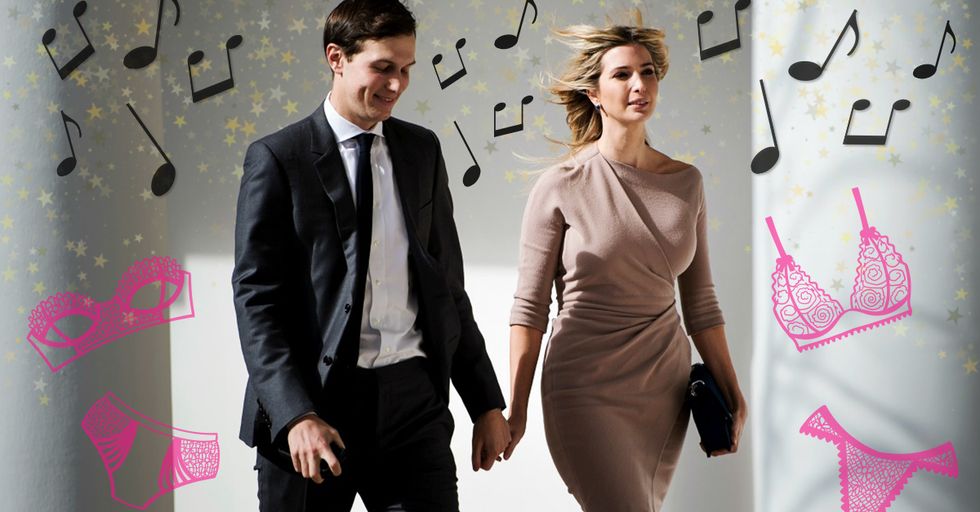 Did Someone Just Find Ivanka and Jared’s Public 21-Minute Sex Playlist on Spotify?

Ivanka Trump's Spotify is a thing of orderly beauty. The official first daughter/presidential adviser has such descriptive playlists as "Walk To Work," "Weekend Morning," and "Holiday Party." Basically, the woman tells you exactly what she's listening to exactly when. So when eagle-eyed Huffington Post journalist Ashley Steinberg spotted a 21-minute playlist mysteriously titled "991122," she was intrigued.

Could it be? Had she *gasp* found the mythical Javanka sex playlist?

There were several clues to indicate this was, indeed what this playlist was. First, 991122 is the hex (or HTML) code for the color red, and the songs in the playlist were all slow and in a word ... sensual.

And then there was the date the playlist was created: October 15.

For those of you not in the know, October 15 is exactly 10 days before Ivanka and Jared's anniversary. Means something, right?

Now if you're still not convinced this playlist is sexy-time music for Javanka, let's look at the songs. Steinberg conveniently breaks down a couple for us.

Of John Legend's "All of Me," number one on the playlist, Steinberg has this to say: "Legend sings, 'Even when I lose I’m winning' [and] Jared and Ivanka are both notorious workaholics, with Ivanka even telling New York Magazine in 2009, 'Jared and I are very similar in that we’re very ambitious.'"

Convincing, eh? We can totally see how it could be hot.

How about "Ordinary People," another John Legend track, which is number two on the playlist? Steinberg says, "In the song 'Ordinary People,' the line 'I know I misbehaved and you made your mistakes' might be an allusion to Ivanka’s initial hesitancy in converting to Judaism."

Steinberg had a few more songs to analyze.

Steinberg asks, "So, is this Ivanka and Jared’s 21-minute sex playlist? The verdict here is a lusty yes." For us, it's actually a tepid "maybe."

We get how "All of Me," "You’re Beautiful," and "When We Were Young" could be suitable sexy-time songs for Javanka, but "Ordinary People?" Come on...

You can view the playlist below.

So, what do you think? Is this is Javanka's sex playlist?