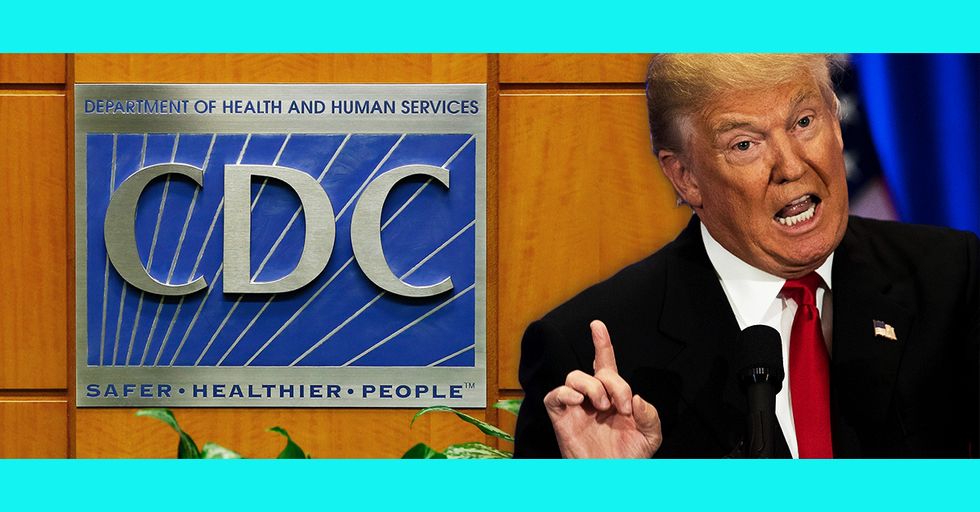 Did the Trump Administration Forbid the CDC From Using These Seven Controversial Words?

It's a dark day for democracy when the government starts banning words. But is that exactly what happened when the Center for Disease Control (CDC) was presented with a list of seven sensitive words at a meeting on Thursday? The Washington Post reported that these seven words were "forbidden" from being used in official documents pertaining to next year's budget. But the Department of Health and Human Services, which oversees the CDC, is singing a different tune. What's the real story here? Is Trump really banning words from being used?

These are the 7 words the Trump administration has banned the Centers for Disease Control and Prevention from using… https://t.co/ZvmQeiMGeJ
— CNN (@CNN)1513575968.0

In some cases, the Washington Post reported, they were given alternative phrases to use. For example, instead of "science-based" or "evidence-based," they suggested the phrase "CDC bases its recommendations on science in consideration with community standards and wishes."

Obviously, if true, this move by the Trump administration would be positively fascist, and Twitter erupted in anger.

Our democracy has been in danger ever since Donald Trump took office. We know that much is true. And if they've gotten to the point of banning words, that's a new low, a new level of wrong.

The CDC relies on science and evidence to, um, do its job. The fact that these words, along with other extremely relevant and timely words, are banned, seems like a total denial from the Trump administration of the reality in which we live and an effort to throttle progress.

The news of banned words really feels like a dramatic step backward.

As much as The Handmaid's Tale felt real when it was first released, this is worse. The banning of words or books is like dystopian storytelling 101.

While we're on the subject, I can think of at least seven words for someone who would censor the language of a coun… https://t.co/kXWp9YZscv
— Nick Jack Pappas (@Nick Jack Pappas)1513449685.0

The American public was rightly was up in arms about the CDC being banned from using those seven essential words, but then the CDC director responded, and things got a little hazy. Did the HHS ban those seven words after all?

Not according to Dr. Brenda Fitzegerald, the director of the CDC.

She came right out and said that no words have been banned at the CDC. In a thread, she explains (sort of) where the confusion came from.

Here, she explains that the CDC will remain committed to their "public health mission as a science- and evidence-based institution."

She continued, "As part of our commitment to provide for the common defense of the country against health threats, science is and will remain the foundation of our work. CDC has a long-standing history of making public health and budget decisions that are based on the best available science and data and for the benefit of all people—and we will continue to do so." While Fitzgerald doesn't deny that the list of words exists, she does deny that they are banned from use.

She then quotes a statement from the HHS concerning the list of supposedly banned words:

If the words aren't banned, why list them at all? Well, according to Paste Magazine, "the ban is less government censorship and more scientists trying to coax science-averse Republicans into funding their proposals." So while the words aren't expressly banned, the CDC is being strongly urged not to use them because if a Republican sees the word "transgender" in a budget proposal, they're less likely to sign off on it.

This is perhaps not as scary as these words being outright banned, but it sure is sad and terrible.

And the move could still have disastrous consequences. According to PBS, "some in the scientific community said that forbidding certain words could help change the direction of policies at the CDC." Even if the words aren't banned, the fact that they're discouraged from being used could mean less than adequate attention is paid to the issues in which these words would play major roles.

So whether the words were outright banned or not, the list could have disastrous consequences for policies at the CDC. This pussyfooting around backward Republicans may be a short-term strategy for policy wins, but it's going to hurt the American people in the long run. As a result, many are proudly using the seven "banned" words in any way they can:

Truly, there is no better description of Trump's brain. "Fetus-sized" says it all. There are mere days left in 2017 and the Trump administration is still managing to squeeze in injustices every single day. Here's to devoting 2018 to stopping him in his tracks and reversing the course of the country.