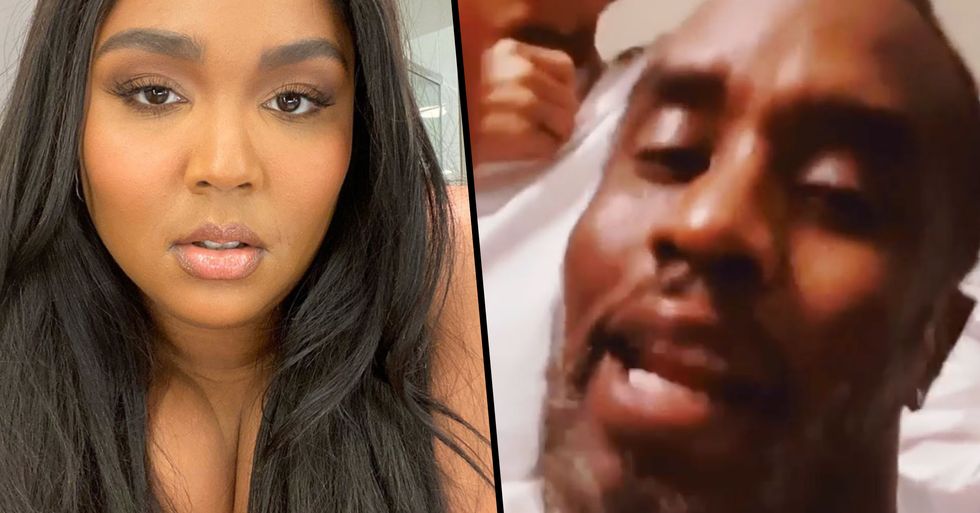 Unless you've been living under a rock for the past year or so, you'll have noticed the massive impact that Lizzo is having on the music industry. From her incredible lyrics and her infectious beats to her message of self-love, she's the breath of fresh air that we've all been waiting for. And to top it all off, Lizzo was even crowned as TIME's Entertainer of the Year in 2019.

But things aren't all sunshine and rainbows for the talented star. She has been on the receiving end of some horrible online abuse. And after a recent Instagram Live, people have accused Diddy of being one of them. He has now addressed the situation.

Read on to find out the shocking reason as to why he did what he did...

Diddy has recently been under fire for his decision to stop Lizzo from twerking.

It all started when singer and producer Diddy (also known as Sean Combs / P Diddy), decided to hold a virtual Dance-A-Thon fundraiser.

It featured artists such as Jennifer Lopez, Demi Lovato, Drake and of course, Lizzo.

Everyone got to do their own bit but when it came to Lizzo's turn, Diddy's "controversial" behavior had some people turning on him.

For all of you that don't know, Lizzo has a very loyal fan base.

And there are many reasons for this. Firstly, her third studio album, Cuz I Love You, is a total masterpiece. But it's not just the brilliant music that she makes that has garnered Lizzo such a legion of fans.

Which other plus-size, dance-trained, hip-hop artist plays the flute in almost all of her songs? Lizzo is truly one of a kind.

In June last year, Lizzo stormed the stage at the BET Awards and stole all of our hearts.

She also performed at the MTV Video Music Awards - and, again, blew the internet's collective mind. For one thing, the stage was decorated with a giant inflatable booty. And, to finish, also managed to preach a message of self-love to the eagerly awaiting audience.

And late last year, Lizzo was cemented as a tue icon despite only being in the limelight for a short period of time.

But it is not always sunshine and roses for the singer.

Lizzo is no stranger to online abuse. No matter what she does, there are always haters trying to pull her down and after the Dance-a-Thon on Instagram Live, people started accusing Diddy of being one of them.

As the singer started twerking to "1 2 3" by Moneybagg Yo, she was cut off.

After apologizing, Lizzo then requested a new song.

And what better hit than one of her own? She put on "Juice" and so she could continue the fundraiser. However, the comments on the Live were having none of that behavior from Diddy as they all turned on him asking why he wouldn't allow Lizzo to twerk but he let people like Draya Michele do the same exact thing to "Back That A** Up."

Many accused him of having "double standards."

However, Diddy decided to address the situation and even tagged the queen herself, after things got a little intense. He claimed the reason why he shut Lizzo down wasn't because of the fact that she was twerking. The video was posted by TheShadeRoom, and you can watch it if you keep scrolling.

"There's one thing that I want to make clear—my queen, my sister Lizzo," he said, before explaining he had to stop the music because it had a lot of cursing in it. "She's one of the best twerkers in the world, okay? So let's keep that clear. It wasn't about twerking. You're allowed to twerk on Easter."

"It was a lot of cursing in the record and I don't need child services knocking on my door right now, you understand?" It makes sense, guys.

And just to make it all perfectly clear, he finished with this:

"Lizzo, we love you. Everybody, stop looking for the negative. Look at the positive, man. Let's go to the love." And just to focus on the biggest positive: Diddy's fundraiser managed to rake in over 3 million dollars! If you want to see what else celebrities are doing to address the current pandemic, then keep scrolling...