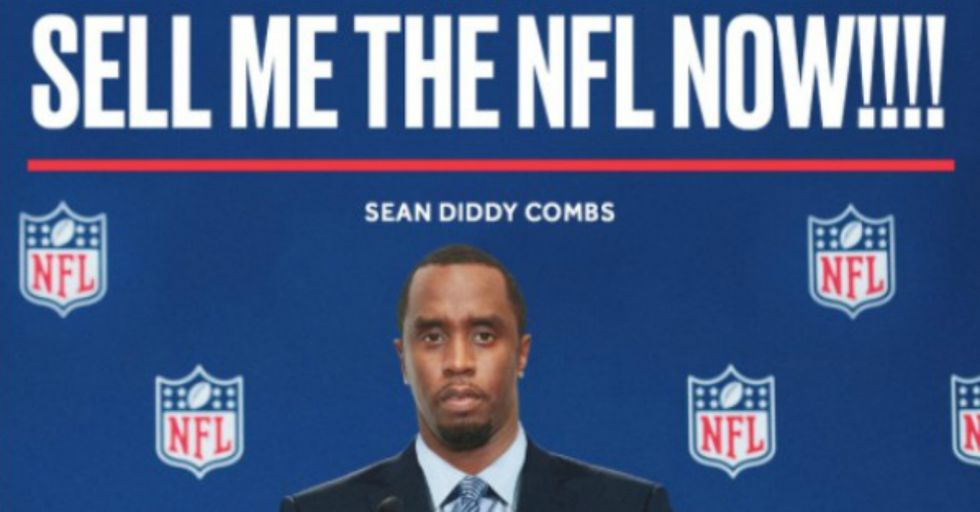 Sean "Diddy" Combs is a rapper, producer, businessman extraordinaire, and maybe the next owner of the National Football League?

On October 10th, Diddy tweeted out his pitch to be the next owner of the NFL, presumably in the wake of the controversy surrounding Colin Kaepernick's #TakeAKnee protest, and honestly, it kind of sounds great.

Diddy makes it sound like the NFL would be rainbows and butterflies and hugs all the time if he owned it, and we're on board.

Bleacher Report made him a poster and everything.

It's based on his Twitter pitch to become the owner of the NFL, which literally includes the words, "SELL ME THE NFL NOW!!!!" Let's break down his plea tweet by tweet.

Apparently, it's been a long-running dream of Diddy's to own an NFL team.

But dreams can grow and change, and his certainly has. Now he wants to own the whole league. But what would an NFL owned by Diddy look like?

Well, he wants you to able to be yourself.

"Kneel for the national anthem if you want to," Diddy's pitch seems to say. "Protesting won't jeopardize your 401k!"

Then, he gets more explicit:

Have freedom to be a great human and protest for your people without being demonized for your beliefs as a KING!! NEW DREAM ALERT!!!!
— Diddy (@Diddy)1507680220.0

In Diddy's NFL, you can be the "great human" you are and still protest against injustices. You won't be "demonized for your beliefs" because you will be seen as a "KING!" Also, just putting it out there, it would be great if concussions and other traumatic head injuries weren't a thing in Diddy's football league.

At first, it seems like maybe Diddy wants to start his own football league. But no:

He pretty clearly wants to take over the NFL. And now that Roger Goodell officially wants players to stand during the national anthem, a Diddy-owned NFL is looking pretty good.