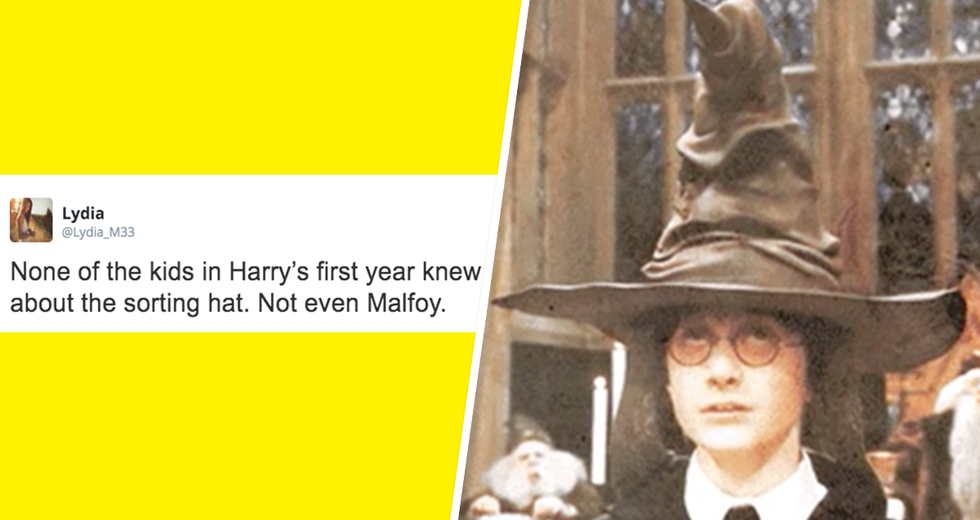 Everything That Just Didn't Make Sense in the 'Harry Potter' Universe

So many of us grew up wanting to be a part of the wizarding world...but did you ever notice that some things just didn't make much sense? Sure, overall the story more than works — it's a global phenomenon, after all. The devil is in the details, and some Redditors couldn't help but point out a few of those details. Would we call these Harry Potter mistakes? Some of them, yeah. But mostly they're just things that make no sense within this universe.

Turns out, we lifelong Potterheads have a few questions for J.K. Rowling. Maybe some of these have occurred to you too, or maybe the following observations will totally blow your mind! Because Potterheads are observant. So check out all of the strange things that just didn't make sense in Harry Potter!

Welcome to the wizarding world!

From the minute Hagrid spoke those clandestine words, "Yer a wizard, Harry," we were plunged into the fantastical wizarding world. But, as can happen in fantasy lore, a couple of things don't quite line up!

Let's start from the beginning: the Sorting Hat.

None of the kids in Harry's first year knew about the sorting hat.

Literally not one. Not even Malfoy. Not even Ron with his 5 brothers going before him as well as his parents.

Yet at the end of the last book, Harry is openly discussing the event with his son.

This. Ron is scared about having to fight a troll or something, yet he has a ton of siblings, not to mention his parents, who went to Hogwarts before him. You'd think the topic of the sorting hat would've come up at least once but even Molly apparently was like 'Nah he'll figure it out' -Daedric_Cheese

I know I'm late to the thread, but I've never understood something about the Triwizard tournament. For the spectators, two of the three tasks must be super boring.

Here, watch these people jump in a lake. Now, wait.

The logic of Slytherin house is...flawed.

Hagrid says there wasn't a bad wizard that didn't come out of Slytherin, so didn't anyone think that maybe the problem was that they were putting all the problem children with other problem children and locking them in a dungeon during their formative years? Of course they turned out evil. If your only option for friends are Crabbe and Goyle and Malfoy, and everyone looks at you like you're a criminal, and you LIVE IN A DUNGEON maybe you'll become a criminal. -Bananawamajama

At Slughorn’s Slug Club meetings, Hermione brings up her father being a dentist, which gets confused stares from the students and Slughorn. Yet, in the Chamber of Secrets a clock in the Weasley house can be seen, each hand with a family members’ face, and many indications of where they might be at any given moment.

One of those places is the dentist.

Accio being a fourth-year spell.

You can tell that this is only because JKR didn't think of it til GoF, because this incredibly simple yet useful spell appears exactly zero times in previous books.

Were they REALLY trying to protect the Sorceror's Stone?

Locking the 3rd-floor corridor when anyone that knows 'Alohomora' can get in. -Earthmang It's a good point. "Let's lock the three-headed dog in and then teach 11-year-olds how to unlock stuff!" Okay, then.

That Hogwarts was supposedly one of the safest places in the world. -drdoom

Hogwarts...really isn't safe at all.

I can assure you if my kid is at Eton or Phillips Exeter and there's the ghost of wizard Hitler living in the back of a teacher's head one year, and then kids being petrified and a possessed girl finding a snake dungeon in the girl's bathroom the next, and then a supposed murderer hanging around campus the next year, I'm going to have to evaluate whether or not my kid stays at that school.

Some people give Dumbledore too much credit.

Dumbledore was a great man. I got massive respect for the dude. But when it comes to his role as a headmaster I would say he is a pretty incompetent one. He had no control over administration and had no idea what's going on around here. -sleepdaddy

Not to mention his massive bias for Gryffindor. -TheMarchHopper

Pure-blood kiddos: *know all about quidditch, know absolutely NO math*

Where do the pure-blood kids go before Hogwarts/secondary school? Do they have a wizarding primary school? Are they homeschooled? They don't go to muggle schools because they know jack about the muggle world I need a n s w e r s -yllekahtram

I don't understand why Dumbledore tolerated the way the Dursleys treated Harry so poorly. Even if he didn't want Harry to know that he was a wizard-world rock star, he might have had Hagrid drop by one day when Harry wasn't around to have a word with Vernon. -BaronVonWazoo

HP is set in the '90s, so why is there never some Green Day playing in the common rooms?

They don't listen to any muggle music. Some of them grew up with muggles, so they should be into it. Same goes for TV shows. -Marise20

Some magic really shouldn't be legal.

Love potions being legal. Gotta be the biggest bunch of stalkers ever. -Infammo

Also, apparently we know where psychopaths come from.

It's worse when you think about how Voldemort was evil because he was conceived by a love potion. How many wizards are unknowingly creating psychopaths? -ContrivedCucumber

Seriously. Also, the obliviate charm: if they can just wipe someone's memory, who knows what bad stuff some people have done and then just erased it. Should honestly be one of the unforgivable curses. -Da_Question

How in the heck did Hagrid's dad, a normal human man, procreate with a twenty-five-foot female giant? -blueeyesredlipstick

Not much optometry in the wizarding world, clearly.

They are able to literally grow bones back from nothing but can't fix Harry's eyesight so he doesn't need glasses. -mleclerc182

There are muggle technologies that are actually superior to what the wizards have. Like phones or faxes (given the books were written in the 90s. Today, it would be video chat, etc). They need to send an owl cross country while muggles could just use the phone to get information across faster. -if_you_think_so

Seriously, think about everything that would've been different.

Harry: I dreamt that Sirius is injured in the Ministry of Magic.

Sirius: Me... I'm home yelling at Kreacher. What about you?

Hermione: You're an idiot Harry.

Quidditch. Scoring a goal is 10 points. Catching the Snitch is 150. There would have to be a massive imbalance in Chaser skill level between two teams for the Snitch to not decide a game. -Friendly_Isopod Yeah, it's basically just 2 seekers and then a bunch of backup dancers. -GreendayG11

We think you killed someone, so we’re not going to give you a fair trial or undertake in an unbiased collection of information, no, we’re going to just let you rot in what equates to Alcatraz in the middle of the dang ocean guarded by shadow demons that feed on hopes, dreams, human souls, and presumably the occasional puppy. Have fun! -Labrat_The_Man

Wizards are so selective about the muggle things they use.

Wizards don't understand things like phones, muggle clothes, or muggle money. They live in a place where...99% of the population is muggles...you would think they would pick up some basic understanding.

-Oilfan94 Also, they use some muggle things like tents and stuff but still use medieval stuff like a feather to write. Why not use a muggle pen? -zuzg

What in the heck happened to Dumbledore between 1929 and 1945 to turn him from Jude Law into Michael Gambon? -Portarossa

Also, Dumbledore is kind of horrible to Harry when you think about it.

Why was Dumbledore masterminding the whole thing? Did Dumbledore specifically set up the whole series of events in a giant decade-long trap? Why did he train Harry as a magical child soldier? Why did he do everything at arm's length?

Dumbledore had the magical equivalent of a nuke with the Elder Wand and invisibility cloak. He very well could have beaten every Death Eater individually, picking away at their numbers. The Death Eaters still have families and day jobs and go to the bathroom. They aren't in a huge magical army yet.

There wasn't a reason to go all cloak and dagger. Dumbledore is hideously powerful, had access to immortality and had 2/3 of the most powerful magical items (and all of the useful ones) from death himself. So why go through so much trouble?

Are we glad Hermione had a time-turner? Yes. Did it make sense for her to have one? Nope!

Time-turners. Everyone acknowledges the massive potential ramifications of using a time-turner improperly to the extent that they're not allowed to be used by anyone. But an exception is made for teenagers - arguably the most irrational users conceivable - with raging hormones and not-yet fully developed brains. Probably not a good policy. -KobeBrady

The Triwizard Tournament is a "binding magical contract," sure. But...what does that mean?

Why couldn't Harry just...not compete in the Triwizard Tournament? It's clearly against the rules, it's clearly not supposed to happen, it's probably a trap since Harry has had 3 years of magical assassination attempts against him, why not just let him forfeit every round and everyone can move on? -Bananawamajama

Voldemort isn't too bright when you think about it!

Voldemort is a freaking idiot. If he would drop theatrics and throw a baby against a wall, there wouldn't be any issues for him. -Undecided_User_Name Should have yeeted Harry out the window. -BlondeShadow

Professor Binns better get a TA.

How does Binns teaching a class even work when it comes to homework? They’re consistently having to write essays for him, but ghosts are specifically stated to not be able to interact with physical objects very much, if at all. It’s poltergeists that can move things.

So how does Binns collect, much less grade, homework? And given his memory issues when it comes to names, how would he ever manage to assign the correct marks to each student?

Wizard History could be awesome if taught by someone even vaguely interesting.

Hogwarts has how many students...?

JK Rowling admits she's bad at math, but like how many people go to Hogwarts? If there are really only 10 students per house per year, that's only 280 people. But she describes hundreds, sometimes thousands of kids. The only compelling argument I can think of is that there was a huge demographic shift after Voldemort was "defeated" and a lot more people had babies so the years right after Harry have a lot more students. I honestly think she just hadn't figured out how many students it was. -Allredditorsarewomen

All these adults looking after Harry and none of them ever thought, "get that boy a THERAPIST."

Also, it's wild in the 5th book when Harry clearly has PTSD but every adult (except maybe Sirius and Molly) is like "let's let his two teenage friends take care of him." Now that I'm an adult Hagrid is my favorite and Dumbledore does not come off looking good. -Allredditorsarewomen

Apparently you can just say stuff and it happens!

The wizarding world is full of wonderfully creative words for magic spells. Yet Ron randomly blurts out “eat slugs" and it actually works ?! -Cocktails-n-Dreams

The Order of the Phoenix really could've used some luck!

How come Felix Felicis production wasn’t increased so that every member of the Order of the Phoenix, at the least, was outfitted with one ampule for emergency use, and one ampule when they knew the confrontation with Voldemort was at hand? Furthermore, why didn’t the death eaters and Voldemort take this stuff? -ElectricPoop Share these hilariously bizarre plot holes with your fellow Potterheads!