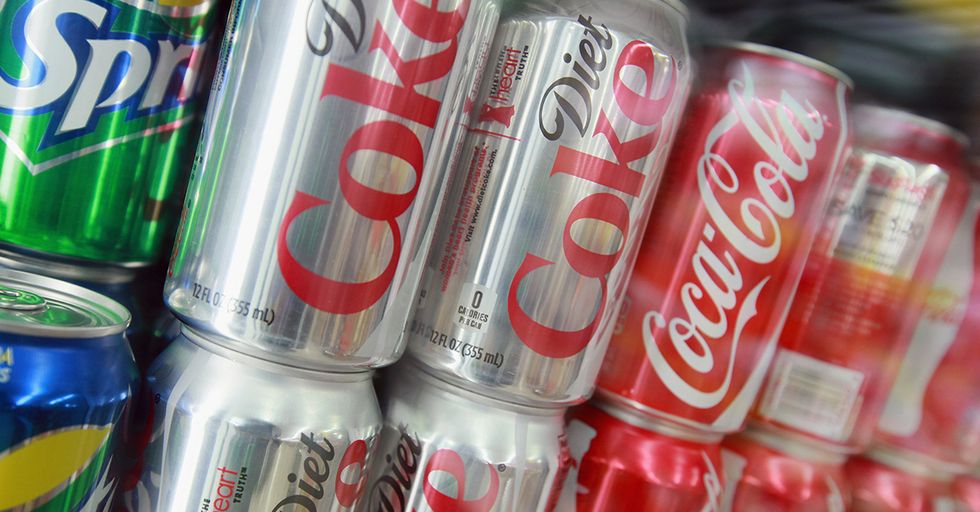 Guys, I have some bad news. It's time to stop reaching into the employee fridge and downing like six Diet Cokes a day (and Diet Pepsi, you weird loophole seeking Pepsi fan). Maybe it's time to switch to a very fashionable yet much grosser La Croix because a new study from the American Heart Association says that drinking diet cola (or more specifically, artificial sweeteners) leads to an increased risk of heart disease.

And it gets worse. The study found that the impacts of artificial sweeteners are far worse in women. That's why while writing this article, I'm drinking a heart-healthy glass (or three) of red wine. I am also not a woman, but that doesn't stop my casual alcoholism.

Okay, enough with the banter, let's get down to the facts so you can... you know, stay alive. (Don't click that link if you're not ready for the Bee Gees.)

According to CNN, the study found that drinking two or more of any artificially sweetened drinks per day lead to an increased risk of strokes, heart attacks, and early death in women over 50.

The risks are exaggerated in certain people as well.

Specifically, women with no family history of heart disease or diabetes and women who are obese or African American.

Dr. Ralph Sacco from the American Academy of Neurology thinks we should take these finding with a grain of salt.

He says, "This is another confirmatory study showing a relationship between artificially sweetened beverages and vascular risks. While we cannot show causation, this is a yellow flag to pay attention to these findings." So while doctors were able to show a correlation between patients drinking diet sodas and heart disease, they were unable to conclude that the cola was the root cause.

However, this is not the first time studies have shown that diet soda is unhealthy.

CNN reports that previous research has shown a link between diet beverages and stroke, dementia, Type 2 diabetes, obesity and metabolic syndrome, which can lead to heart disease and diabetes. So it's safe to say the science looks good on this one, folks.

The authors of the study are still trying to figure out why diet drinks specifically.

Lead study author and future all-star of this article Yasmin Mossavar-Rahmani asked, "what is it about these diet drinks? Is it something about the sweeteners? Are they doing something to our gut health and metabolism?" Does God just hate us? Are we not to enjoy the simple pleasures in life without risking an early departure to the afterlife? Is this article getting too philosophical for no reason? The answer: Yes. To all of those questions.

Why was there specifically an increased risk in obese women and African American women?

Well, the study doesn't offer a reason why, per se, but we can infer a reason. Obese women and African American women tend to be at higher risk of heart disease in general.

So let's break down how the study was conducted.

This massive study took over 12 years of data and surveyed more than 80,000 postmenopausal women in the United States. Each woman was asked how often they drank one can of any "diet beverage" over the previous three months.

This was one of the first studies on this particular topic to include demographic information.

According to our all-star, Dr. Mossavar-Rahmani, "Previous studies have focused on the bigger picture of cardiovascular disease. Our study...looked at who is more vulnerable."

Gimme the facts and figures.

Throw your sodas in the garbage, people.

Here's the weird part. Women with no prior history of heart disease or diabetes and were obese were two times more likely to have a stroke if they consumed more than two diet sodas daily. Two times!

There were no such correlations between women of normal weight or overweight having an increased risk for strokes.

But they were still at risk for other types of heart disease and heart attacks.

"African-American women without a previous history of heart or diabetes were about four times as likely to have a clot-based stroke."

Again, the risk of stroke did not apply to white women of healthy weight.

White women were 1.3 times as likely to have heart disease. So really, no matter how you shake it, drinking more than one diet soda a day puts you at serious risk for either heart disease or stroke. No matter your weight or race.

On top of all that, here's another thing doctors found apply to all women over 50.

The study found that small-artery occlusion, a common type of stroke caused by blockage of arteries inside the brain, was nearly 2.5 times more common in women who had no heart disease or diabetes but were heavy consumers of diet drinks.

Researchers really want you to take this with a grain of sugar.

They say that it is impossible to determine whether the results of the survey are because of a specific kind of sweetener, a specific type of beverage, orf another health issue entirely. So which is it? Should I panic and cast out artificial sweeteners forever, or just keep suckin' em down like I didn't even read this article?

Well, a little of both.

Also, please never say suckin' em down again. I think most people would agree it's probably a good idea to cut soda out of our diets anyway. Research has shown it's bad for your teeth, your internal organs, and our ability to look sexy (their words, not mine). But at the same time, as everyone's mom used to say, "everything in moderation."

My point being, the study offered up other possible reasons for this increase in stroke and heart disease.

"Postmenopausal women tend to have a higher risk for vascular disease because they are lacking the protective effects of natural hormones," cardiologist Dr. Kevin Campbell says. So it's possible that this alone could be the cause of the increased risks.

This study has its opposition.

And in the interest of fairness, we're gonna present those opposing views, but we just want to add a little warning off the top that these comments come from representatives of the low/no calorie industries, so like obviously they're gonna come out and say the research is wrong. But, form your own opinions! It is 2019. Anyway...

All this according to Dr. Keri Peterson, who is a medical advisor for the Calorie Control Council (which again, is a company backed by low/no calorie foods companies).

"This association may also be contributed to by rising blood pressure and sugars that were not yet diagnosed as hypertension or diabetes but warranted weight loss."

Keri Peterson's argument is basically that women who participated in this study were already consuming too much sugar, gaining too much weight, and seeing their blood pressure rise, which leads them to take up "healthier" diet beverages. Therefore, the results of the survey are from problems that started before the 12-year-long survey even started.

For example, William Dermody Jr., vice president of media and public affairs for the American Beverage Association, called the studies "low-quality and "inconclusive," due to them being correlation based studies, not causation based studies.

"Low- and no-calorie sweeteners have been deemed safe by regulatory bodies around the world and there is a substantial body of research that shows these sweeteners are a useful tool for helping people reduce sugar consumption." So basically, "the government says it's fine and sugar is bad." Okay, Mr. Vice President of Media and Public Affairs for the American Beverage Association. I'm sure your opinion is as fair and unbiased as possible.

However, there are studies that suggest switching to a diet beverage can help with weight loss.

Even according to the AHA, the group who published today's study.

Just last year, the AHA issued an advisory saying that short term use of low-calorie and artificially sweetened drinks to replace sugary ones "may be an effective strategy" to promote weight loss in adults.

They recommend diet sodas specifically for people "find[ing] it difficult to move directly from sugary drinks to water."

But of course, that recommendation comes with a caveat. Because they always do.

Last years' study went on to say, "there is solid science that consumption of sugary drinks is associated with adverse health outcomes. Thus, it may be prudent to limit intake until we know more about how they may impact people's risk of stroke."

Basically, while switching from regular sodas to diet sodas can help weight loss, it doesn't eliminate the risks of heart disease and stroke. The best solution is probably to cut our or limit sodas entirely.

There is a bit of a silver lining here though.

According to the Beverage Marketing Corporation (a group that collects data and then consults beverage companies using that data), Americans are turning more and more to water and other non-calorie beverages.

In fact, in 2016 bottled water surpassed carbonated beverages to become the best selling beverage in the United States.

Good job, America. Still don't know why you're buying water in bottles and not using something reusable, but that's a topic for another article.

But of course, that's not all.

That's over 36 gallons of soda per person. Holy Jesus, Batman. That's a lot of soda. Although honestly, that's only like 12 trips to the movies so I guess it makes sense.

What are the researchers doing about it?

Well, on a personal level, Dr. Sacco says he has "stopped drinking artificially sweetened beverages entirely." Adding that he sees the emerging research as "an alert" for hard-core fans of diet drinks and anyone thinking of turning to them for weight loss.

"We should be drinking more water and natural beverages, such as unsweetened herbal teas."

Stay tuned for their 2019 research paper where they also tell us coffee, sex, and general happiness is bad for us...