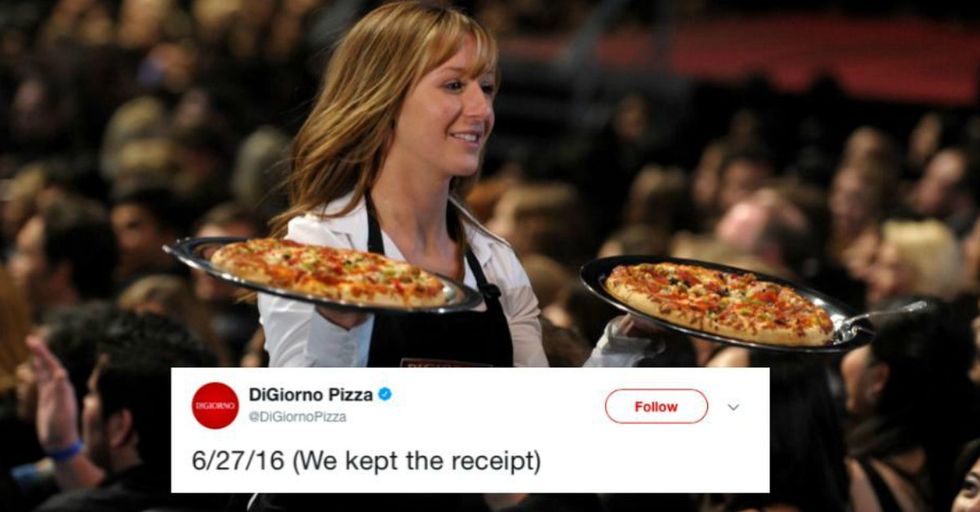 Papa John's, your third favorite pizza company (after Pizza Hut and Domino's) is having a bad week. Founder and CEO, John Schnatter, found himself in a bit of hot water when he blamed the NFL for a poor sales quarter, and now, the company finds itself in the middle of a cheese-stuffed brouhaha over plagiarism.

It all started last year when DiGiorno Pizza posted this little gem to Twitter.

Truer words were never spoken. Friends may come and go, but a pizza can easily be snatched by that shifty-eyed, quick-fingered pizza-eater sitting next to you. Wait, sorry, that's your friend? Yeah, pizza-thief by any other name.

Notice anything strange? If you squint, you just might see it... THERE! They didn't even bother to change the words around, SMH. Lame.

But DiGiorno wasn't going to take this lying down.

They didn't become the number one frozen pizza by allowing their dough to get rolled that easily. Two days later, they clapped back with this saucy gem that had Papa John's steaming with embarrassment.

And they weren't done yet.

One year later, when Papa John's dipped its cheesy bread into the muddy waters of politics and NFL-shaming, there was DiGiorno, receipts firmly clasped in hand to remind Papa John's of its prior embarrassment.

Just like that, DiGiorno served Papa John's a steaming slice of humble pie.

Next time, Papa John's, maybe keep your cheese dough away from DiGiorno's copy. If you don't DiGiorno is waiting... and it keeps receipts.