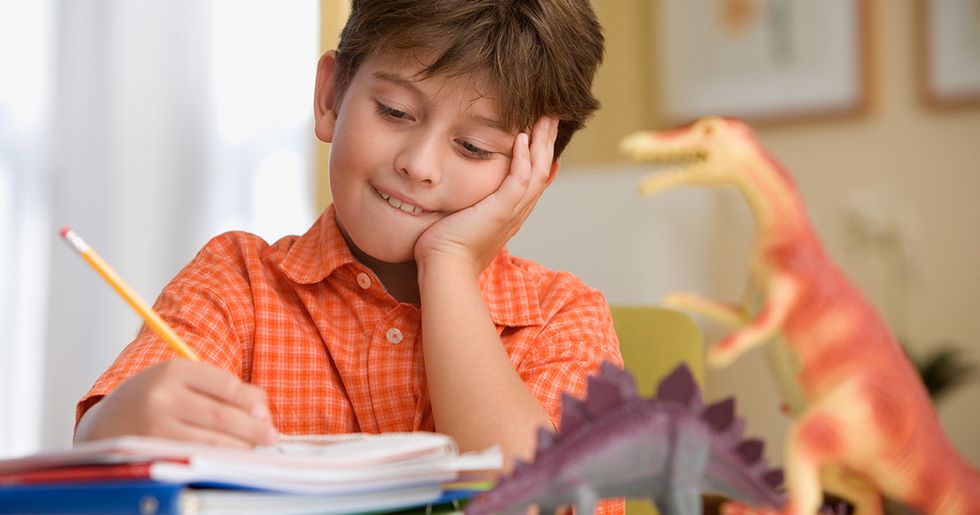 A child will go through many phases of obsessing over certain things or TV shows before they find what they truly love. Some of these phases can end almost as quickly as they started, which can be frustrating as a parent, especially when you're changing the theme of their room every few weeks.

Other obsessions can be a cause of concern, especially when the obsession can get a little carried away. It's common for parents to be afraid that their kid might be that kid that knows everything about something like, dinosaurs lets say. There's really nothing cuter than a kid who loves dinosaurs and thankfully, it's a positive sign that their future might be as successful as their parents hope and dream for.

A study showed that kids who obsess over dinosaurs show signs of being better learners later in life. Now you don't have to worry if your kid runs around imitating a T-Rex, it's a good thing!

Kids and dinosaurs are the perfect pair.

Ask a little kid their favorite animal and most of them will say, without hesitation, that it's a dinosaur.

Something about those sharp teeth.

Kids are amazed by these giant creatures and want to know everything they can about these prehistoric animals.

It even trickles into adulthood.

Some kids never grew out of that obsession, and those are the paleontologists and museum curators that are thriving in their career.

The obsession with dinosaurs is very understandable.

You're lying to yourself if you say you don't think dinosaurs are crazy cool. That's why Hollywood is so prone to making dinosaur flicks because they know we will eat that up.

"Land Before Time" was a huge hit.

If you never got to watch The Land Before Time as a child, you truly missed out on one of the classics.

That movie was basically a gateway drug for the dinosaur obsession.

It's a timeless obsession for children, no matter where they are from or who their parents are, you cannot stop a kid from getting wide-eyed when they see a dinosaur on screen.

If your kid is running around making dinosaur sounds and won't take off their dinosaur pajamas, then you actually have something to celebrate, researchers claim.

That dinosaur obsession is a sign of a genius in the making.

Scientists were fascinated by the consistent and widespread fascination with these prehistoric animals that so many kids have. They were curious what this meant for children and how it affected them later in life.

Dinosaur curiosity is a beautiful thing.

When kids show a deep level of interest in dinosaurs, it had a positive influence on their learning capabilities later in life.

The study, researched and conducted at Indiana University, focused on kids who found conceptional and increasing interest in subjects at a young age, specifically things like dinosaurs.

It just starts to grow on them.

For some kids, dinosaurs are nothing particularly interesting, but for others, it becomes a serious lifestyle and they end up becoming little historians, even correcting adults on their dinosaur vocabulary.

I wasn't kidding, there are some kids out there who have an amazing depth of knowledge when it comes to everything and anything dinosaurs.

That kid is crazy smart.

When I was two I could barely say my name. I was truly amazed after watching that video! For Noah, it's just fun and games learning more about dinosaurs, but researchers wanted to study why these kids develop such a deep interest in dinosaurs.

How does this interest translate into a genius lifestyle?

The study showed that children who have a deep level of interest in something like dinosaurs show better comprehension skills as they grow. They are more likely to correctly respond to comprehensive questions and elaborate on how they reached their answer.

Parents, it's okay to encourage the obsession.

A continued conceptual interest in dinosaurs can have a seriously positive impact on their future educational career, so it's okay to feed let them watch Jurassic Park for the tenth time in one week.

Some other major benefits.

That growing dinosaur collection of toys is all pointing your kid towards a bright future.

It can improve their attention span.

When kids are consistently curious about something, it shows that later in life they'll be more likely to stay focused for longer periods of time.

It's not impossible to figure it out, but if you like something, it makes researching it a little more interesting and feels a lot less like work. When a kid shows signs of continual interest in a subject, they are more likely to show persistence when trying to figure out something they may not understand right away.

It can boost their confidence.

When your kid knows more species of dinosaurs than most adults do, it naturally creates a pretty proud parent. As parents brag about how much their kid knows about dinosaurs, it encourages kids to dive deeper into their obsession, feeling a little bit like an expert.

Ellen Degeneres brought on this adorable kid who got to experience dinosaurs in a whole new way, and apparently, he loved it.

This kid knows his stuff. If your kid is crazy obsessed with dinosaurs, he could end up on the Ellen show! Definitely not a bad thing.

Ellen is also the best at finding young geniuses. But here's another little kid that knows an insane amount about dinosaurs!

Do boys and girls love dinosaurs the same?

The researchers looked into how boys and girls' interest with dinosaurs vary and what might lead to how this obsession fades over time.

Pretty much everyone loves dinosaurs.

The study didn't see much of a difference in initial interest in dinosaurs, but they did notice the continuation in interest or obsession with dinosaurs between boys and girls.

Boys tended to express a deeper interest in dinosaurs, showing their interest through information gathering, while girls loved the idea of "pretend adventures" with dinosaurs.

How often do you see dinosaurs in the girl aisles at toy stores?

It could be brands and stores market dinosaur themed toys and activities to boys instead of girls.

Any local toy store will more likely than not put any dinosaur-related toy or game in the boy section, encouraging their interest in the creatures. It's pretty rare to see a dinosaur action figure in the girls' section of Target or Walmart.

The study explained that, like all good things, not everyone's dinosaur phase lasts and there are a few contributing factors.

The study found that those sweet childhood obsessions often fade once they start school when the curriculum is set before them and often doesn't allow a lot of leeway for little ones to explore their previous interests.

When kids start school and they realize they are the only ones who can name a wide range of dinosaur species, they may become a little insecure about something they were once very proud of.

There's no dinosaur club in school.

You might have to start one, but we can't promise that kids would line up to be a part of it.

I guess you don't want to be known as the dinosaur freak.

When a little kid can't stop talking about dinosaurs, it's cute and really impressive. But it might not be the easiest way to make friends as they grow up.

But we still love kids who love dinosaurs.

There will never be a time when dinosaurs aren't popular among kids and we are really okay with that.

If you weren't the kid obsessed with dinosaurs, you must have known someone who was. Share this with a future paleontologist and encourage their obsession!