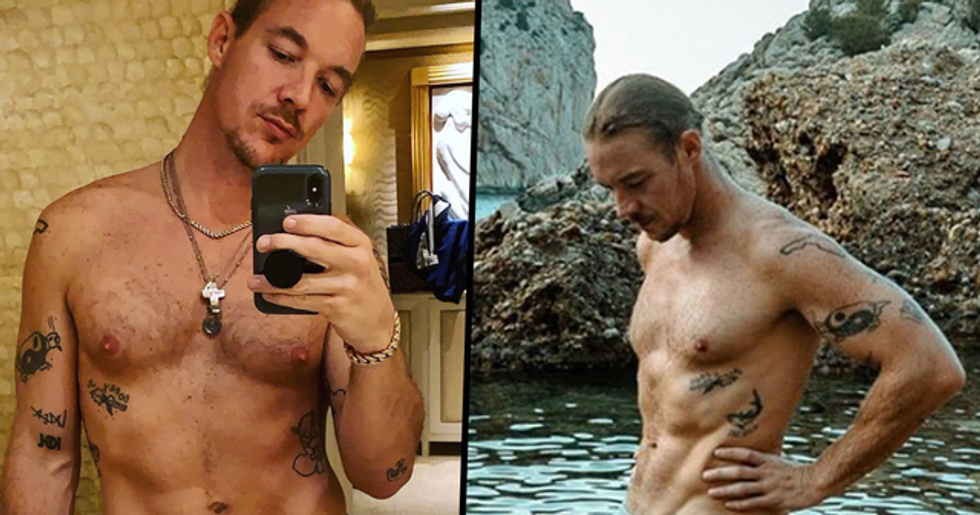 DJ and producer, Diplo, is just as well known for his hilarious social media presence as he is for his killer beats. He's not afraid to look like an idiot, and, for that, we have to respect the guy. But his latest Instagram post is perhaps his most bizarre yet.

Standing on a beach in Ibiza, you may at first be forgiven for thinking that it's a typical influencer-style shot. But then you'll notice that Diplo seems very excited to see his beautiful surroundings. And fans noticed too - with tons of his celebrity pals leaving some very funny pictures.

What do you think? An elaborate hoax, or a man really enjoying his vacation? Scroll to decide for yourself.

He's the co-creator and the main player in electronic music fit, Major Lazer, alongside being a hugely successful solo artist. He's known for a huge range of collaborations, including with Madonna, Britney Spears, and Snoop Dogg.

Alongside his musical successes, Diplo is known for something else.

He's cultivated one of the most chaotic and bizarre social media presences seen in our time - which is definitely an achievement of sorts.

Diplo took part in the internet's latest viral trend, the bottle cap challenge - and people were surprised this dad-bodded DJ could actually do something that required such skill.

Against the will of his pals, Sophie Turner and Joe Jonas, Diplo live streamed a part of their wedding celebrations. At their second ceremony, his phone was confiscated by the couple.

But, honestly, you've got to hand it to him.

Diplo is a man fundamentally unafraid of looking like an idiot on the internet - and we have to respect that.

One classic way that Diplo draws attention to his Instagram?

Well, he absolutely loves to show off his body - whether that's in a flattering way, or not. Usually not, let's be honest.

Some of his posts are pretty hilarious.

For example this one, where he looks like some sort of perverted magician's assistant.

This is one of the most revealing.

This image is the closest that we've come to seeing Diplo's "dick-lo." Or at least it was - until his most recent penis-centric post.

He's certainly keen to show off his... area.

And it's almost never in a sexy way, either. Instead, Diplo tends to take a more humorous approach to posting his almost-nudes.

Because his latest pic wasn't just of his penis.

Oh no - the post was of his penis in a very excitable state. And it didn't go unnoticed.

It's almost too perfect - Diplo is in Ibiza in the photo - although we think that this commenter is insinuating a particular type of pill.

Sure, it's a pretty obvious one - but they say that the classics are the best.

There was a fair amount of celeb attention, too.

Lindsay Lohan went with a simple prayer hands emoji. Perhaps she was impressed? (By the beautiful scenery, of course.)

There were also some classic tent-pitching jokes.

While others decided to make a joke at Diplo's expense.

Orange is the New Black star, Ruby Rose, joked that this is an all too common occurrence for the DJ - and that she's not a fan.

Fashion designer, Michael Costello, tried to sympathize with Diplo's... overexcitement - claiming that the same things happens to him when he's surrounded by beautiful fabric.

Many were suitably impressed with Diplo's offering.

Some commented on his caption.

Diplo had written: "I've been all over God's green earth, and nothing excites me more than the raw beauty of nature." Clearly!

Certain Twitter users believed that Diplo had posted this ... generous looking image in response to a comment by Lorde several years ago.

They laughed that Lorde has such tremendous power that her comment had actually caused Diplo's penis to grow to its current impressive state.

People are impressed in more ways than one.

The confidence that it takes to post such a provocative picture is undeniable - and that's kind of cool, we guess.

Although there is some skepticism.

Many are pretty convinced the pic is a spoof, and not of Diplo's junk at all.

When you see it, you may notice that it looks a little off.

The placement does look odd on second glance - and where exactly is his right hand, hmm?

So here's the much-hyped image.

Engorged penis? Or a simple trick of the eye? You'll have to judge for yourself.

What will he post next? After this x-rated snap, there's really not much more that he can reveal, right? Right?