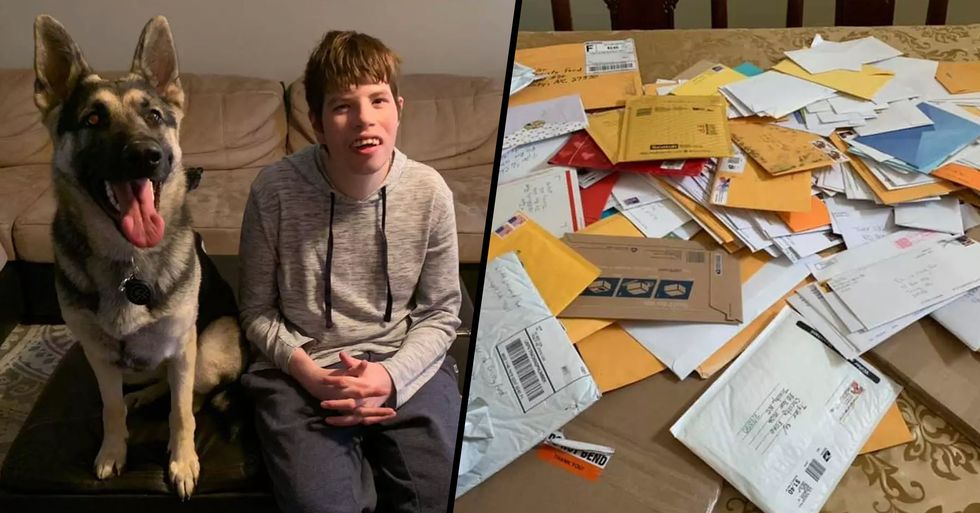 A young man living with several disabilities has received the best birthday surprise after his family shared his love for dogs on Facebook.

Keep scrolling for the full story, and to see the heartwarming gestures for yourself.

The twenty-one-year-old from North Carolina lives with a number of different conditions and disabilities, but has found his true love within dogs.

These animals are where Tyler finds his comfort in an otherwise difficult life.

Tyler was diagnosed with Sensory Processing Disorder (SPD), which causes him to experience mental overstimulation and frustration that he is unable to verbalize or express.

The young man hasn't had an easy life.

Taking to Facebook, Tyler's mom, Shanda Ford, wrote about her child's condition: "Tyler requires full assistance with all fine and gross motor skills, mainly due to severe Psychomotor delays. He also lives in constant pain due to hip dysplasia and feeding difficulties."

So, understandably, his family want to do everything they can to make Tyler as happy as possible...

Because it's the least this young man deserves.

And this year, his aunt, Christy Ford, had an idea.

She set up the Facebook page titled Tyler's PAW Strings, which shares his love of dogs with the world.

And Christy decided to reach out to make Tyler's up and coming birthday that little bit more special.

In preparation for his twenty-second birthday on April 10th...

Christy took to Tyler's Facebook page to ask people to mail photographs of their own dogs.

Christy wanted to make her nephew his own dog scrapbook...

But she needed the public's help first. Posting on the page, she wrote: "I am gonna [sic] work on putting a new book together for him for his 22nd birthday coming up in April. I need pictures of your dogs... If you could write your baby’s name on the back with what breed they are it would be great."

She stressed how much this would mean to Tyler...

And even insisted that he would remember the name of every single dog he would get a photo of. "Despite Ty’s disabilities, he has a better memory than almost anyone I know! He will remember your dogs’ names in years to come. If I can get this put together for him it would be one of the most meaningful gifts he could possibly receive and EVERYONE can play a part in it."

She promised to include every single photograph she would receive.

"I will include EVERY single picture that I receive whether a hundred or a thousand, there is no such thing as too many in this case!"

After sending off her post, Christy was expecting maybe a handful of photographs...

So she was completely stunned when her request went viral, prompting thousands of people to send gifts.

The volume of letters she received was completely unprecedented...

And it wasn't stopping there.

The family mailbox continued to fill up.

And it wasn't just the mailbox that continued to be filled...

At one point, Christy had to wheel the mail out in oveflowing carts. Now that's the sign of one popular man.

And then the parcels started to arrive...

As well as posting photographs of their dogs, kind-hearted people from all across the country started sending dog-themed gifts for Tyler to open on his birthday.

Tyler has been completely spoilt for his birthday...

As the story spread like wildfire across the internet, parcels and envelopes started arriving from different countries all across the globe.

Understandably, the family are totally overwhelmed by the kindness of these strangers...

Speaking in an interview, Christy said: "Scott and Shanda [Tyler's parents] are a little overwhelmed but extremely thankful for all these people reaching out to help make their boy happy. We are all in shock that so many people across the world are this willing to be a part of this huge gift to Ty."

And as for Tyler's reaction to the whole thing?

Well, Tyler doesn't fully understand the magnitude of what has happened, but he is incredibly excited all the same.

Christy explained that, though Tyler doesn't fully understand what's happening, he is still enjoying the gifts and photos all the same.

"Tyler doesn't have the ability to fully understand what is going on, but he knows he was on the news and that people are sending him and his dogs' special prizes."

But what will Christy do with the thousands of photographs she's received?!

With the help from the rest of the family, she's going to work on getting them all put into scrapbooks. It might just take a while! "I still have to figure out what I'm going to do as for books. I will have to order a tonne of binders and plastic inserts so I need to find my best option financially."

Raising a child with disabilities is never going to be easy.

Keep scrolling to read about one mom's powerful letter that details what life is like with a disabled child...