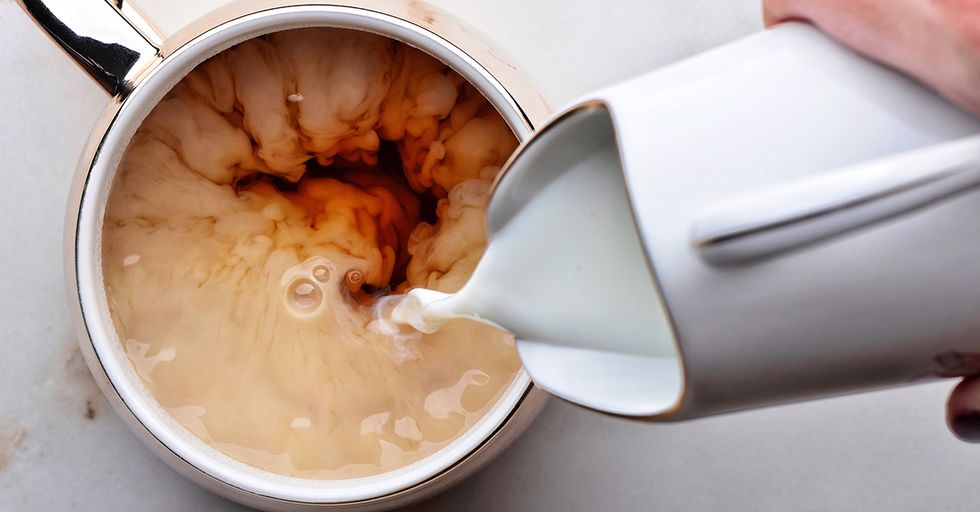 OK, look. I'm not saying that Americans have figured out the best way to do every single thing ever. I think there is plenty of room for improvement when it comes to the good ol' U. S. of A. That being said, I recently found out about this huge controversy that's been sweeping the Internet, and I have to say, it's pretty darn ridiculous.

Again, America has plenty of things it could (and should) improve on. But in this one case, I think the rest of the world may be being just a bit too harsh.

See, it all comes down to tea and the "proper" way to make it. If you're anything like me, you probably think making a cup of tea is pretty straightforward. However, it seems like the rest of the world may just disagree with us.

There are plenty of things that people in the U.K. do differently.

For instance, they drive on the left side of the road rather than on the right! This is legit the thing that would freak me out most about traveling around Europe. I just know that if I were driving a car, I would 100 percent end up in the right lane.

Or maybe we just took the random U's out in our version of English. Now that I think about it, that's probably more likely.

In the U.S., biscuits are buttery, flaky, savory little nuggets of deliciousness, ideally consumed with (more) butter and honey.

They're cookies! And they don't even have biscuits. They have muffins and scones, but there's no real biscuit analog.

And don't even get me started on pudding.

In America, if someone offers you pudding, you know exactly what to expect: a sweet, creamy dessert that tastes like chocolate, vanilla, or maybe butterscotch.

But across the pond, it's an entirely different story.

"Pudding" just refers to anything that you eat for dessert. Even if it's not pudding.

OR it could be something savory!

If I was traveling in the U.K. and someone offered me pudding, I honestly wouldn't know what to say. Obviously, they make it work for them. I'm just saying I would be very confused whenever pudding was involved.

And then there's the matter of tea.

The Brits drink a lot of tea, as I'm sure you already know. As a matter of fact, that's what today's story is actually about.

Now, the process of making tea is pretty straightforward — at least, I THOUGHT it was.

You heat up the water and pour it into a teacup or mug.

(Or two if you want a stronger cup.) Let it steep for a few minutes, then remove the tea bag.

At this point, you can add your milk or sugar.

Or lemon or honey – you get the idea. Now, most Americans probably don't drink tea as often as they do across the pond. However, it's recently come to my attention that when we do have tea, we're doing it all wrong.

Because sometimes, we use the microwave.

The very idea of putting a mug of water into the microwave totally skeeves out our friends across the pond.

Apparently, using this humble kitchen appliance is all kinds of messed up.

Who knew that this would be the thing that solidifies Americans as the weirdos of the world?

I mean, I don't personally use the microwave to heat up water, but I know plenty of people who do, and honestly? It's not that weird.

I honestly don't even know anymore. All I know is that it apparently freaks out a lot of people who are not Americans.

Like, the people of London are actually talking about it.

ive only been in london for a few hours and ive already been told twice that americans are dumb because they heard… https://t.co/JRccdQeESl
— justine (@justine)1539412777.0

Apparently, using the microwave is "dumb." But, hold on a second.

I mean a microwave is used to make cold things warm.

Is it really that bonkers to use a microwave to heat up water? I use the microwave to reheat my coffee (or tea!) pretty much every morning! Is that OK?

Do British people maybe just not realize how magical microwaves are?

You can cook entire meals in a microwave! It's true! I've done it!

You guys, it's kind of ridiculous how many tweets there are about this "issue."

I thought this was a kettle:

I feel like most houses have one of these, right? If you're just as confused as I am, stay with me for a sec.

Because apparently, no, that handy device is not a kettle.

And boiling water on the stove is SOMEHOW just as unacceptable as heating it up in the microwave.

So what are we supposed to do?

Oh man. Do British people know about sun tea? If they don't, I feel like that's the thing that might just put them over the edge.

Anyway, THIS is a kettle:

I guess British people exclusively use electric kettles to heat up their water. So, in case you're keeping track, using a microwave (which runs on electricity) to heat water is bonkers, but using a kettle (which also uses electricity) is OK. Good to know.

Regardless of how you use electricity to heat up water, this seems a bit extreme:

Americans apparently microwave water when they want a cup of tea, this is literally the worst thing I have ever heard.
— Gertrude Perkins (@Gertrude Perkins)1489335406.0

I mean, come on. The worst thing you've ever heard? You must not hear many things if this is really going to bother you that much. Oh, and in case you were wondering, I guess it's not just British people who are very offended by Americans' use of the microwave. It's the whole world, basically.

This person cracks me up:

"Even herbal tea." Aside from steeping time, are you supposed to make herbal tea using a different method? The more I learn about how British people think tea works, the happier I am that we dumped a bunch of it in the Boston harbor.

No, we say, "Hello! Welcome to my home. Can I get you something to drink?" And guess what? In my experience, people very rarely ask for tea.

Something tells me we'll be able to live with this person's reaction:

the SECOND I found out that Americans boil their water in the MICROWAVE i’ve never looked at them the same.
— rio ⁷ HASEUL (@rio ⁷ HASEUL)1549323953.0

Oh, you can't even look at Americans the same way? Sounds rough. I guess that means it's time for tea, right?

This person gets it:

@PhineasGreen Why spend money and buy a kettle when I have a microwave ? Lol Americans don’t use kettles like that.
— Vitamin•i (@Vitamin•i)1549289511.0

If you have a microwave (or a teapot and a stove), then I really don't think there's any reason to buy another appliance for your kitchen. My counter space is limited as it is!

Just wait until people find out that we clap when the plane lands.

Just kidding. That really is weird. Share this with someone who isn't afraid to microwave water!