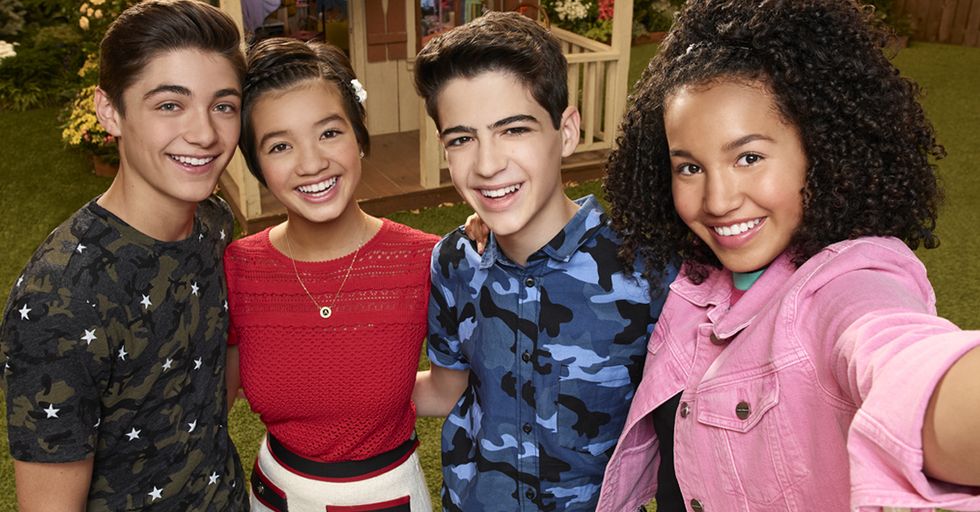 Media plays a huge role in what we think is normal. Seeing ourselves reflected back on TV or in movies can help us to feel accepted, to understand ourselves, or to feel connected to other people like us. So it's always exciting when a TV show breaks new barriers and shows us a new facet of humanity.

You'd be surprised at some of the shows that are making these strides into diversity. Take Andi Mack for example. This Disney channel show might seem like your standard tween fare, but it's been making some "firsts" recently and honestly, we're pretty flipping excited about it.

Yeah, it might seem a little bit counterintuitive to see that "Disney" and "breaking barriers" are in the same article together, but Andi Mack is taking our favorite kids channel to a new level. Let's check out the show and see what it's doing differently, shall we?

What is 'Andi Mack?'

If you're like me, you're too old to know what the heck the kids are watching these days, but apparently, Andi Mack is currently wildly popular on the Disney Channel.

It's the story of a normal girl.

Our titular Andi Mack, who discovers that her older sister is actually her mom.

Of course, no Disney channel heroine has to go it alone.

She's accompanied by her best buds, who round out the show.

Apparently, the name has finally shed is "slayer" connotations and shows are allowed to use it again.

Gotta have a love interest.

After learning that her sister Bex is actually her mom, Andi meets her dad and learns how to have a relationship with her parents.

But we're not here for any of them.

No we're here for a character that's a little something special.

We're here for this guy.

His name is Cyrus Goodman, and this character uttered a sentence that had never before been heard on the Disney Channel.

What did he say?

Casually, almost nonchalantly, our boy dropped the words "I'm gay." The show handled the moment perfectly: his friend Jonah responds with a smile and "Yeah? Cool."

Yeah you heard that right.

We're going to need to know Cyrus' full story because this kid is making history.

His friends set him up with a girl named Iris, but it just doesn't feel right to him.

After breaking up, Cyrus figures himself out.

He realizes he's gay and not only that, he has a crush on his best friend's boyfriend Jonah (the real fear we all have: our gay best friends are far hotter than we are and they're definitely going to steal our boyfriends).

He comes out to his friends.

In a surprisingly realistic turn, the show captures the uncertainty of a young person navigating their sexuality and sharing it with their friends.

But it all turns out ok.

Like many tweens today, the kids of Andi Mack take a gay friend in stride.

And in last week's episode he finally says the words.

Coming out to his best guy friend is the final step Cyrus takes by saying "I'm gay."

Show creator Terri Minsky has some strong feelings about Cyrus.

She said, "The fact that my daughter, most of her close friends are kids who knew at the age of 12, 13, junior high, that they were gay. I just felt as if, the reality is that Andi would probably have a friend like that."

But the story comes from a more personal place.

Jonathan Hurwitz wrote the episode, and it's no surprise: just like Cyrus, he is Jewish and gay.

Hurwitz pulled the coming out experience from his own life.

"In the writer’s room, I shared a personal story about how nervous I was to come out to a college friend back in 2010. While grabbing burgers one afternoon, he asked me to pass the ketchup, so I handed him the bottle while mumbling the words, 'I’m gay,'" Hurwitz shares.

The story echoes Cyrus' coming out.

Cyrus says the words while sharing food with a friend, who responds with the exact same words. This is what art is really about: sharing true and real moments.

It's not just the writers though.

Even the actor who plays Cyrus, Joshua Rush, has shared in interviews that he's incredibly excited about the direction his character is taking.

Rush knows how important it is for kids to see their stories on screen.

"I’m really proud to be able to play Cyrus. I think it’s an exciting role to be able to play for Disney. [...] But I think more than anything, it’s an exciting role for these kids that are going to end up seeing Cyrus on their screen and going, 'Oh, that’s me! I recognize that and I understand that and I resonate with that.' I think it shows those kids that their stories are valid." This kid is a pretty great role model.

You seriously need to check out this cast interview from Good Morning America because our boy Joshua is dropping some truth bombs.

The most important part? Modeling a good response.

Joshua goes one step further to tell us why it's not just important to have representation but to have GOOD representation: "One of my best friends came out to me before anybody else. I wish that I had someone like Buffy on TV to show me how I should have responded."

It's rare that a show has a cast and crew so committed.

And it shows in the way that Andi Mack is breaking barriers and demonstrating what diversity can look like in a kids show.

" target="_blank">Getty Following in the footsteps of early representation like The Jeffersons and Soap, Andi Mack joins a new wave of representation that was started with shows like Will and Grace and continues into media like Orange is the New Black.

But 'Andi Mack' takes the diversity of sexuality into a new realm.

But while most shows tackling sexuality have been aimed at adults, there's still a serious lack of media for kids and teens that represents the GLBT+ community.

We're so proud of the Disney Channel for showing positive models of diversity.

Here's hoping that the kids of the future don't have to feel anxiety about coming out.

And media that shows them positive responses is a great way to help.

Here's to all the gay kids who get to see themselves on TV, maybe for the first time.