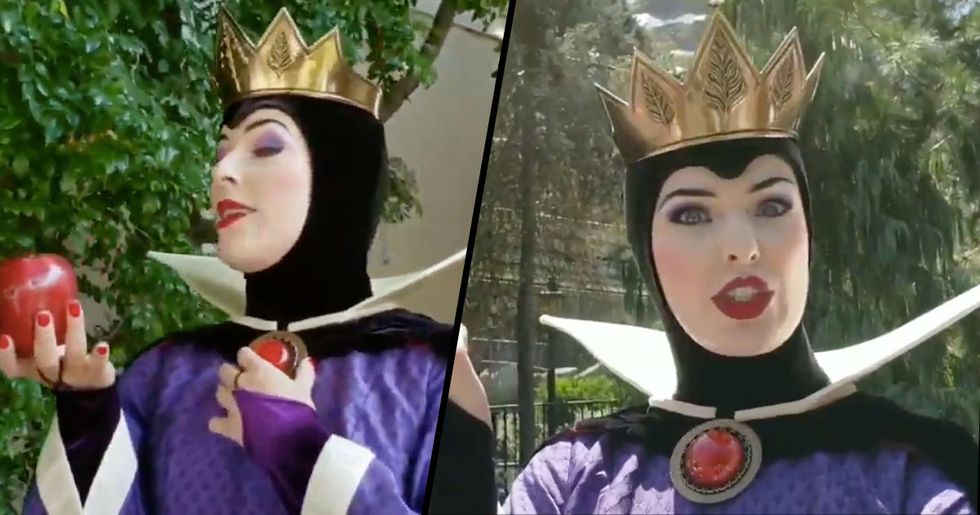 If there's one thing that everyone dreams about, its that all-important trip to Disneyland. The magical experience is said to define one's childhood, or so I've heard. I wasn't one of the lucky ones who got to experience that as a kid, but visiting the place as a fully grown adult seems just as magical so it's on the bucket list, I can assure you.

Seeing your favorite Disney princesses must be a dream come true. But, nowadays, it seems as if Disney has kicked it up a notch with their actors. Disney's very own "Evil Queen" hit the headlines for her funny, and accurate, portrayal of the popular villain from Snow White.

Check out these hilarious videos that someone uploaded to Twitter. If you didn't have a reason to visit the park before, you do now.

Over the years, Disney have had some iconic actors.

I mean, they take the whole concept of "bringing characters to life" very seriously, as you would expect them to. They only hire the best of the best and that's apparent from how many times they make the news for their exceptional acting skills.

And people just can't get enough.

It seems to have become the talking point of the whole experience. I mean, the rides are cool and stuff, but I think that I'd rather spend my time watching Sleeping Beauty argue with Cinderella or something of the sort.

This user agrees with me!

It's become the prime location to make wonderful memories - and not just for typical reasons.

Please tell me that you remember the iconic video of Daisy Duck?

When this first appeared on the internet, we were all left speechless. A person was filming Daisy as she walked back to her little house, but she wasn't leaving without giving the people what they came for.

Daisy really knows how to work the camera!

And, for that reason alone, she will go down in history as one of the best actors in all of Disneyland.

And other people have recalled their favorite Disney encounters.

Well, this one's just common sense! Why would you insult Mickey Mouse that way?

And this girl accidentally stumbled across a scene that she shouldn't have...

I'd keep this one on the down-low. You wouldn't want to get involved in beef with Disney princesses, would you?

Maybe it's because she's been stealing the show a lot recently. The oldest Disney princess knows how to pull on the heartstrings of the people.

The last time we heard from her was when she did the cutest thing.

A mother had uploaded a post to Facebook describing how she was left extremely emotional after seeing the Disney princess comfort her son who had special needs.

She proceeded to sit and rub his head as he had "an autism meltdown."

According to his mother, Snow White went "above and beyond" and the whole of the internet couldn't help but commend her for her kind gesture.

It's no wonder that all of the actors have stepped it up one more notch. Snow White is leading the viral trend of Disney actors on her own.

But, watch out, Snow, because, now, the Evil Queen is in on it!

It seems like it has become a competition to try to out-do Snow White and who better to accept the challenge than her very own arch-nemesis?

I'm sorry to tell you, kids, but, unlike the original story, I think the Evil Queen's going to win this one.

A Twitter user uploaded a bunch of hilarious videos of the Queen doing what she does best.

From amazing cape work to insulting bystanders, this Evil Queen is exactly what you'd expect her to be: talented, witty, and savage.

Who needs a Disney princess when you can bask in the glory of the Queen, herself?

And it seems as if everyone's making the switch. Check out her top 3 most iconic quotes.

3. "I signed my name on top because everyone else is beneath me."

This is what she told a little girl who wanted her autograph. Rather than getting scared of her fierceness, she laughs and points at her name in the book.

The formal greeting from the Queen. Take it as a compliment that she's even chosen to acknowledge you.

Talk about confidence. While complimenting herself, the Queen also finds a way to insult people in the crowd. We stan!

And people just can't help but fall in love with her. Have a look for yourself:

Can Disney please give this evil Queen her own YouTube channel or something, because I would watch every single sec… https://t.co/IcozZm5EZ7
— ROEM (@ROEM)1567090186.0

A user commented saying: "Omg, she's such an amazing actress!" Someone else replied: "Yeah, she's my new idol." Ours too!

We're joining you on this trip!

listen, i’m obsessed with the current evil queen at disneyland and i wanna go just to meet her omg https://t.co/CtfTjGceWE
— jess⁷ (@jess⁷)1567104771.0

If you didn't already have a reason to go to Disney, now you've got one. We'll see you all there! And if you're up for some more Disney-related fun, keep scrolling to read all about the amazing party that they're throwing for Halloween! Spoiler alert: it will have booze and free candy!