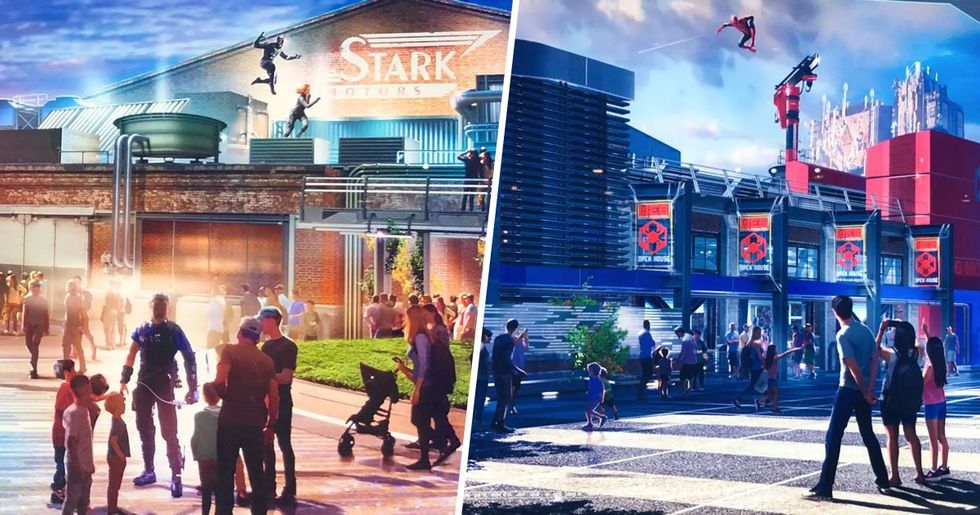 Disney Is Opening a Marvel-Themed 'Avengers Campus' Park in 2020

But there's been one announcement, in particular, that seems to have caught the attention of Disney fanatics... and it's one for the Marvel fans out there.

The Hollywood studio has revealed that it has a new Marvel-themed attraction named "Avengers Campus" coming to Disneyland's California Adventure park.

Keep scrolling to find out everything we know so far about Disney's latest superhero attraction.

The biannual event was host to an array of exciting announcements from the Hollywood studio.

There was truly something for everyone.

We learnt that Lizzy McGuire was making a comeback...

The childhood classic will be returning to screens, with Hilary Duff reprising the infamous role in an all-new Lizzie McGuire series.

There was lots of news surrounding Disney +.

The studio's new service, launching November 12, will be competing with the likes of the streaming giant, Netflix, which remains firmly at the top of the deck, rising star, Hulu, and of course, the slew of other streaming services launching in the coming months, to bring us a whole host of Disney content. For example, during the D23 Expo, Lucasfilm President, Kathleen Kennedy, welcomed Ewan McGregor to the stage to announce his return to an iconic role in an untitled Obi-Wan Kenobi series for Disney+.

A Black Panther sequel also got a mention.

Black Panther 2 is officially in the works and is slated for release on May 6, 2022.

An all-new Star Wars vacation experience is coming to Walt Disney World Resort. According to Disney, "Star Wars: Galactic Starcruiser invites guests to embark on a two-night adventure aboard a glamorous starship."

It's a one-of-a-kind attraction...

The Starcruiser will include a “spaceport" day on Batuu at Star Wars: Galaxy’s Edge. Guests can interact with characters and "become an active participant in immersive stories that unfold over the course of an unforgettable galactic journey on board the starcruiser." Star Wars: The Rise Of Skywalker also debuted at D23 Expo, heading to theaters on December 20.

We also got to see the poster for the upcoming Frozen sequel...

The eagerly-awaited animated adventure is heading to the big screen on November 22. So, not too long to wait...

And of course, Marvel fans were far from left out.

Marvel has long been at the forefront of future plans for the studio - and the announcements seem pretty endless.

Of course, we've already mentioned Black Panther 2, but series Ms. Marvel, Moon Knight, and She-Hulk are all being developed for Disney +.

But that wasn't the only exciting Marvel-related announcement...

Looks like Disney had something else up its sleeve too.

Disney confirmed that it has a new Marvel-themed attraction coming to Disneyland's California Adventure park.

The new attraction named the "Avengers Campus" is coming to the park next summer.

The park is an extension of 2017's Guardians of the Galaxy ride.

Excitingly, the attraction is set to include Avengers training grounds. According to the D23 blog, the training grounds will be a place where "guests can "become part of an interconnected, global story spanning from California to Paris to Hong Kong, as the Avengers recruit new extraordinary people to join them."

The official announcement sadly didn't specify which superheroes would be showcased at the themed attraction...

But, following the release of some concept art, it hasn't taken fans long to speculate who may be making an appearance.

Among the favorites for being featured are Hawkeye, Captain America, and Black Panther.

As well as a handful of other superheroes who have been spotted at Disney parks in the past. Spiderman also looks likely to make an appearance based on the sketches.

The "Avengers Campus" is taking over the now-defunct "A Bug's Land."

Though many were sad to see the family favorite attraction go, it looks like what it's being replaced with is equally as exciting.

The site will reportedly boast a number of facilities.

Including a microbrewery, retail center, and meet-and-greet area for superheroes - all of which Disney has reportedly applied for permits for.

The eatery is fit for Ant-Man and The Wasp.

Itching to get yourself down to the Avengers headquarters? The park will be open to visitors in 2020. If all the Disney talk has got you eager to know what else is in store for fans, keep scrolling to find out every single tv show and movie coming to its streaming platform, Disney +, launching next month. We really are being treated to some amazing flicks...