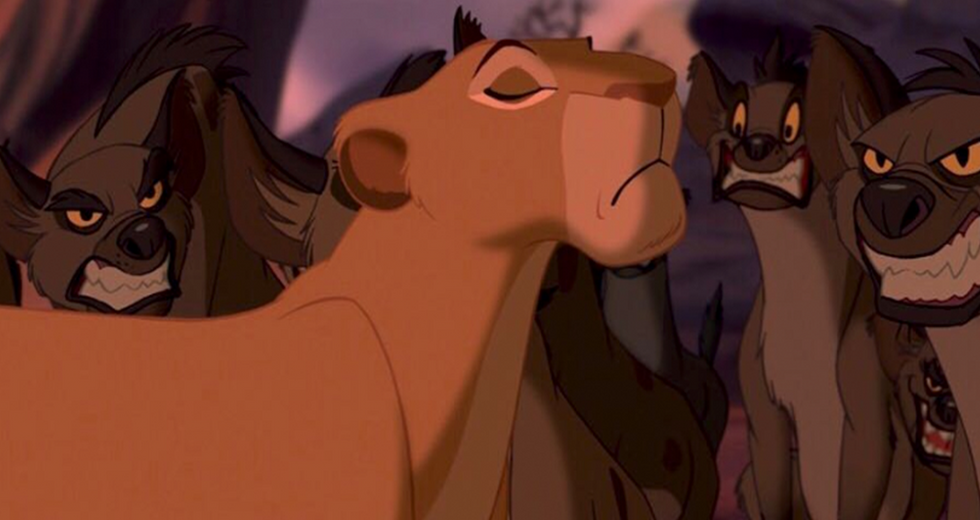 Disney Memes That Will Make Even the Most Cynical Person Laugh

We are in a Disney renaissance, people! Between Aladdin and The Lion King live-action remakes hitting theaters just a few months apart, Frozen 2 ready to turn the world upside down again in the fall, and the persistent rumors that the House of Mouse is about to purchase the rest of the entertainment industry, it's hard to argue that we are, culturally, at peak-Disney.

Is it any surprise then that Disney memes are so popular? The point of memes is to be relatable, and Disney gives us a common reference point. We've all seen Jafar, so when he appears in a meme, we don't spend time wondering who the animated sorcerer is. We just understand that yes, he is making the same kind of face I'd make if I got a fifth chicken nugget in my four-piece from Wendy's.

So check out these Disney memes. They won't just make you laugh and remember your childhood favs, they'll make you nod your head and go, "yeah, that's true, that's true."

When you copied your friends' essays, did you ever just write what they wrote, but with a lot of extra adverbs to make it look different? To be fair, that's kind of how the live-action Aladdin felt compared to the animated version.

Why I was kicked off the debate team.

When it came to prepping for debate, I was the king. But when I actually had to look another person in the eye and tell them their arguments for a decentralized government were spurious and ill-considered? I'd just wilt.

Wow, she's so still in the left panel that she's been painted like the background — a classic animation giveaway that she's not moving in this shot. Not no way, not no how.

No coming back from this.

Mm, not a good look Belle. You're trying to convince the Beast you love him, and you weren't even paying attention when he transformed into a prince? He's gonna leave you, girl.

It does happen a lot.

What is the deal with Disney's company-wide edict that parents have to be dead? What did Walt's parents do to him? It must've been dark.

This look is universal — it's the "I've done the cost/benefit analysis, and I've decided that it's better to lose face than to be hungry" look.

Both me and that guy are crabs.

I mean, this isn't fair. The crab-guy on the right, Jemaine Clement from Moana, is advanced CGI. Poor Sebastian there was drawn on a sticky old piece of celluloid in 1987. Let's see how Sebastian looks in the live-action remake before we assign the "you" and the "guy she tells you not to be worried about" labels, huh?

What's especially accurate about this meme is that the I isn't even all the way on its back — it's in the middle of laying down. Dogs wait for no man — the second that bed cover goes up, they're flying through the air.

I want to know every detail.

Everyone knows the most selfish, cruel thing you can do to someone is tell them about your dreams — no one ever has or ever will care except you — but when kids do it? It's kind of sweet. You'll want to take in every detail.

Minnie will not age gracefully.

And to make this image even more horrible, now Russia has Mickie and Minnie's faces and can use them for propaganda purposes.

This meme is super relatable, as I too leave work every week by swan-diving off the roof.

If you look for perfection, you're gonna be alone forever.

Who would blame Anna for looking past a few glaring red flags? She grew up alone in a castle — she can seek affection wherever she wants.

There is another option — for the first time in forever, she finally got paid! (I know you might not get what I'm referring to here, but that's a riff on a lyric from "The First Time In Forever," which is the best and most over-looked Frozen song.)

On one hand, it's common courtesy to send a text if plans change. On the other hand, Tinkerbelle almost for sure lied in the app about her height.

There's no going back.

Just once, it'd be great to get a haircut and not walk out feeling like they'd cut off 200 percent more than I'd asked for.

And Jaknow that my heart will...

Wow, what a re-frame — what if Jafar only turned evil because the lowly drifter he met and fell in love with drowned after their supposedly unsinkable ship hit an iceberg? You'd feel pretty bad for hating him so much then, wouldn't you?

When two people can not only find each other, but also find they share something so vital to their identities — low self-esteem — well, you just can't help but smile.

It sure seems like something's gone awry when fans start using the animated version of a movie to throw shade on the live-action remake of that movie.

When I'm in line at Chipotle, I know the people going up to get their online orders aren't cutting in line, but I get just as angry as if they were. I can only imagine what these hyenas are feeling (probably hungry and feral, if we're being honest).

You like to see a Disney princess like Elsa, a bonafide superstar and maybe the most popular character for little girls since Ariel herself, be so willing to take notes.

Now, this meme is obviously about Disney's almost worrisome level of power in the media industry, but also it makes me wonder how Mickey would've fared in that big climactic battle against Thanos.

A problem we've all been through.

I hate when this happens. I'm always saying to these kinds of friends, "dude, either be simple-minded or be hasty. Being both is a bad combination."

Some pictures just transcend their own limits. I actually have this image on my phone so I can still listen to music if I forget my headphones.

The older I get, the more I identify with this specific image of Cruella DeVill.

Sometimes you've just got to get a second pair of eyes on last night's fight. And who better to do it than your best friend/ mystical and all-powerful genie?

Don't you remember from last time?

There has to be a checkmark somewhere so my computer just understands that, yes, you can trust this phone. But I haven't found it, and I've looked harder than Jafar did for his diamond in the rough.

Use a spatula as a flyswatter.

Hard to believe that, even as early as 1989's The Little Mermaid, Disney was innovating in the "alternate uses for kitchen utensils" space. They are true visionaries.

Hopefully, dads will look at this billboard and appreciate its sentiment and resolve to spend more time with their kids. But you can also see those dads saying, "I don't have to worry about wildebeests! I'm going to see if my ex if she can keep the kids this weekend so I can play a quick nine."

Not to argue with this meme, because obviously "Let It Go" and "You're Welcome" are incredibly catchy, but where's the love for Frozen's "For the First Time In Forever"? That song was both a banger and an ear-worm and I feel it doesn't get the credit it deserves.