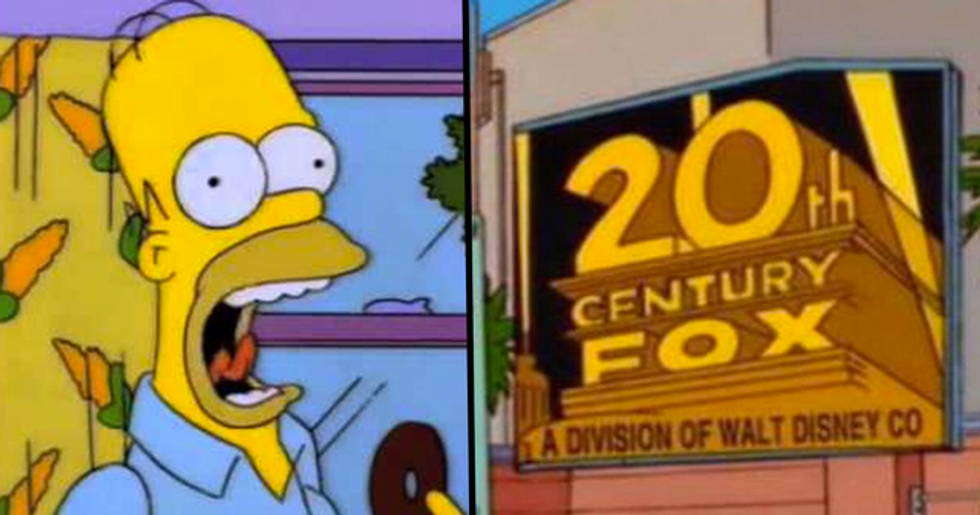 The Simpsons is known for many things - long, rambling story lines, beloved and hilarious characters, and a nostalgically-appealing animation style. But fans of the show have also noticed something else about the cartoon universe, and it's a little bit freaky.

The Simpsons is getting a reputation for predicting the future. As our world becomes more and more like a parody of itself, at every turn, it seems as if the show had already pre-empted what was going to happen. Is it a case of life imitating art, or a sign of something more sinister?

The latest in the string of spooky coincidences? Disney has officially bought 20th Century Fox. And eagle-eyed fans noticed something strange in an episode of The Simpsons that aired twenty-one years ago.

As more and more of these predictions come true, should we start looking to The Simpsons for advice about the future?

It first aired in 1989, and although it has stumbled along the way, The Simpsons still remains one of the most popular cartoons on television.

It's also one of the longest running.

The world of The Simpsons wasn't designed to be realistic, but has an undeniable visual appeal. The show also brought the idea of cartoons for adults to the mainstream.

Many of its most popular episodes are its most experimental, including the famous sequence in which Homer eats the world's spiciest chilli pepper, then falls into a dream world with a coyote voiced by Johnny Cash.

Looking back, it's pretty difficult to criticise what many refer to as The Simpsons' "golden age." It was one of the rare shows which everyone seemed to enjoy.

But there's one slightly strange thing about the show.

The Simpsons has never shied away from exploring bigger issues, such as cosmology, religion, and the end of the world. And in doing so, it has stumbled into some oddly spooky territory.

Many of the show's storylines seem to take a peek into the future.

The latest in this odd string of events?

The acquisition of 20th Century Fox by Disney. The purchase was made this week for a whopping $52.4 billion, meaning Disney now owns the rights to franchises such as X-Men and Fantastic Four.

But fans of The Simpsons noticed something strange.

Disney announces it has reached a deal to acquire 21st Century Fox, as predicted by a Simpsons episode that first a… https://t.co/81ekoDLUGq
— Darren Rovell (@Darren Rovell)1513253812.0

The show had predicted this purchase twenty-one years ago. An episode of the show, “When You Dish Upon A Star," showed an image that depicts 20th Century Fox as "A Division of Walt Disney Co." This episode aired on the 8th of November in 1998.

Some saw this as a little too accurate.

It seems such an oddly specific prediction to have come true that many are starting to doubt that this is merely a coincidence.

It isn't the first time The Simpsons has put Disney in its crosshairs.

This opening couch gag, from an episode of the show from 2016, parodies much of the most famous Disney animation - which seems quite ironic, now that Disney technically owns the footage, The Simpsons being one of the many shows produced by 20th Century Fox Television.

The show's creators have made jokes about 20th Century Fox before, too.

In the sister-show to The Simpsons, Futurama, the logo is altered to read "30th Century Fox," playing on the fact the series is set in the future.

The end credits of The Simpsons features another joke.

The audience whispers and "shushes" in order to prepare for the  logo's appearance - and in some Simpsons episodes, this section of the credits is changed to mirror the couch gag in the show's opening.

Fans of the show pointed out something else.

This isn't the first time The Simpsons has used the future as fuel for a joke. In fact, much of the show's humor has relied upon the technological and social changes going on in the wider world.

One example that fans point to is Ned Flanders' use of what looks like an iPod, five years before the device was invented! Could be a coincidence, sure - but it definitely looks a little strange.

And what's even weirder?

This hasn't just happened once. In fact, the more people explore the phenomenon, the more wide-reaching it seems to be. Take this seemingly innocuous prediction from a 1998 episode, which came true in 2013.

When you start to look at the political predictions, though, things get even more odd.

It seems that The Simpsons managed to predict the 2012 Presidential campaign in 2008, right down to the specific candidates for both parties. Creepy, right?

But there's one prediction which stands out above the others.

It seems that The Simpsons also managed to predict the Trump Presidency years before the possibility was even on the horizon. Many couldn't believe the accuracy of the predictions.

In fact, the presidency was teased years before.

In a 2000 episode in which Lisa becomes President, she discusses the reparations she'll have to make to the economy following Trump's presidency. Super strange - although hopefully this means that we're due a President Simpson after this!

In fact, the predictions went even deeper than that.

References to a potential Trump Presidency (including all the problems that it may bring) have been a recurring theme on The Simpsons, and it has been freaking people out!

The political predictions go even further into the future.

And let's just say, it looks pretty dark. While our rational minds see the whole thing as a string of strange coincidences, there's no denying that it's all a bit weird.

Some have questioned how the show's creators know so much.

Certain Twitter users have (jokingly) suggested that it must be because of the show's connections to the Free Masons. The secret society was parodied in the 1995 episode "Homer the Great."

Others have pointed out even more predictions.

The three-eyed fish in The Simpsons was thought to be a symbol of the end times - and according to Gizmodo, the fish has been found in the real world, too!

Some have even used The Simpsons as an oracle.

If so much of what they had predicted has already come to pass, it stands to reason that maybe we could look to future storylines to see the future. One fan shared this morbid image.

Whatever you choose to believe, you have to admit, it's strange.

Some fans have taken things a step further.

If The Simpsons has been an accurate predictor of events in the early twenty-first century, then maybe Futurama (which has the same creators) could serve as a predictor of even further-off events?

Whatever may be going on, we're impressed.

It's oddly comforting to know that the weirdest world events happening in front of our eyes have already been thought of before. Sure, it was only supposed to be a parody of the future, but still!