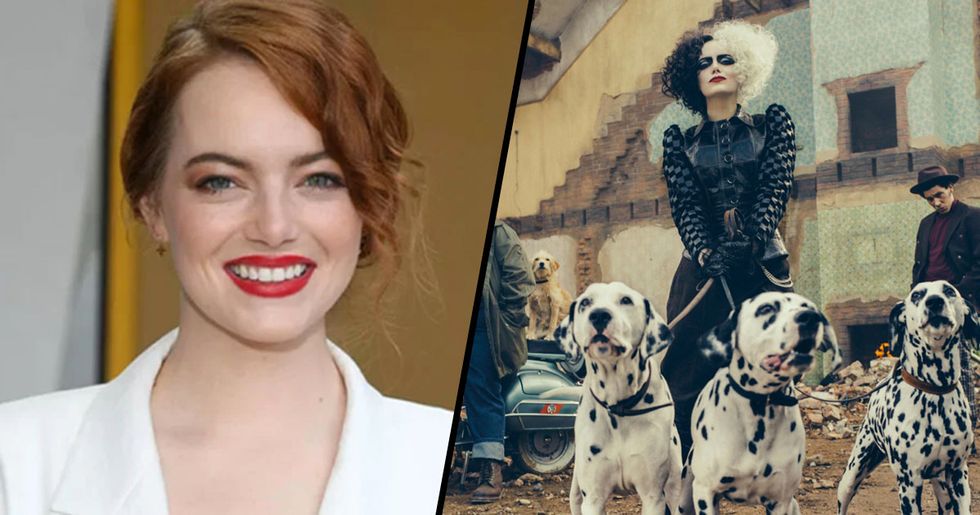 It's no secret that Disney loves a reboot. From live-action renditions to prequels, sequels, and everything in between, the Hollywood studio loves to milk its box office content for all it's worth.

There aren't many of the studio's classics that have escaped this kind of treatment. Recent additions to Disney's reboot, live-action archive include Aladdin, The Lion King, and the upcoming The Little Mermaid, and now it seems the 101 Dalmations franchise is heading into the spotlight.

Disney recently announced plans for a movie based on the fur-loving villain, Cruella De Vil, and this week revealed the all-important release date as well as the first look at the one-and-only Emma Stone as Cruella.

There's set to be a star-studded ensemble cast in the upcoming movie. Keep scrolling to get all the details and to see Emma Stone in her full-Cruella regalia.

In recent years, the number of live-action remakes and reboots of our favorite Disney classics have skyrocketed.

Just this year we've had a live-action Dumbo, Lion King, and Aladdin.

And it doesn't look like the Hollywood studio has any plans to stop, as there are several more additions coming to its expanding live-action catalog over the upcoming months.

There are another 2 live-action movies coming this year alone.

Maleficent: Mistress of Evil and Lady and the Tramp are both heading to theatres later this year.

There aren't many classic tales that escape the reboot treatment.

And it looks like the 101 Dalmations franchise is next in the list to be plunged into the spotlight.

The movie is based on the fur-loving, fashionable villain from 101 Dalmations.

The animated family adventure tells the story of a litter of dalmatian puppies who are kidnapped by Cruella De Vil, who wants to use their fur to create coats.

Their doggy parents, Pongo and Perdita, then set out to free their children from the hands of Cruella.

In the end, while rescuing their own, they also managed to free eighty-four other dalmatian puppies, raking in a grand total of, you guessed it... one-hundred-and-one.

Cruella was famously brought to life by Glenn Close over 3 decades later...

The live-action remake of the beloved classic hit screens in 1996 and starred acting legend, Glenn Close, as the villainous Cruella De Vil.

It's always a risky decision choosing to remake a well-cementing classic and the pay off isn't always great. But, the 1996 movie is equally as popular as its animated counterpart, grossing a staggering $320.7 million at the box office.

The movie pretty much mirrors the same plot as the original '60s version.

Although the biggest difference is there are more talking animals in this version.

Over 2 decades on, the spotty franchise is in the spotlight once again.

Disney has announced an upcoming movie named Cruella, which will center on the fur-obsessed antagonist.

It'll tell the story of how she became the evil fur fanatic she is.

According to Radio Times, Cruella will be a "live-action prequel feature film following a young Cruella de Vil." The origin story will reportedly be set in the early '80s and have a “punk vibe," per The Hollywood Reporter.

So, that means it's set before she meets the puppies.

We're very intrigued to see what caused her gross obsession with those innocent puppies and their fur.

Craig Gillespie, director of I, Tonya will be directing the upcoming movie.

According to Radio Times, Kristin Burr will produce the movie, which will be filmed in London, alongside Marc Platt and Andrew Gunn

Emma Stone has been cast as the leading lady herself.

The Oscar-winning actress will be portraying Cruella in the highly-anticipated movie. This week, at the D23 Expo, Disney revealed a lot of new details about its impending slate of movies and television shows, and excitingly, the event saw the studio give fans a first look at Stone in character as Cruella.

Here's the actress in her full Cruella regalia:

The star sports the trademark 2-toned hair, holding leashes with 3 adult dalmatians, while standing in front of 2 henchmen, giving us a glimpse into what the film will have to offer.

Stone joins a star-studded ensemble cast for the movie.

Acting sensation, Emma Thompson, will join the cast in an undisclosed role, although many people are guessing that she could be playing the older Cruella, at the time of 101 Dalmatians.  Paul Walter Hauser and Joel Fry have also been confirmed for the project.

The new image of Stone as Cruella has got excitement brewing.

Although she definitely has big boots to fill...Glenn Close was pretty iconic as the villain.

Want to hear more about what else Disney has in the works? Keep scrolling to find out all the movies the studio has up its sleeve for the next decade.