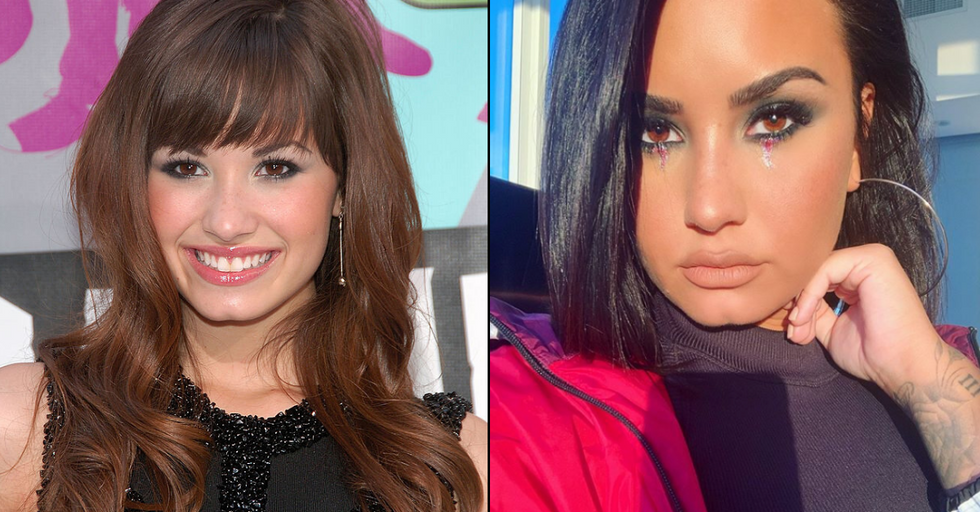 Disney Stars Who Went From Childhood Crushes to Absolute Stunners

These Disney stars started off as innocent kids on our televisions, but as they grew up, they matured along with us — some faster than others...

Known for The Mickey Mouse Club, Spears was only 12 years old when she was cast on the revamped version of the classic Disney variety show.

Brit Brit's all grown up! The pop superstar transformed from wholesome Disney cutie into a scantily clad sex symbol seemingly overnight, and she's been rocking teeny-tiny costumes and provocative dance moves ever since. You won't believe this next one...

Like Britney, she also got her start on the Mickey Mouse Club, performing in a variety of sketches and musical numbers.

What a difference a few short years can make! After leaving the MMC she wowed fans with her huge voice and sexy style. She now stars as a judge on The Voice on NBC. This next glow-up will make your jaw drop.

Before she was a tabloid mainstay, Lindsay was a star in countless Disney films. Some of her most notable performances include Hallie and Annie in The Parent Trap and Anna in Freaky Friday.

But, as all child stars do, she grew up...some would say a little too quickly. And though she did manage to shake the title of "child star," she wrestled with personal demons, though many believe she's on the road to recovery. You probably won't even recognize this next one!

He made a name for himself as a star in Holes and Even Stevens and was known for his impressive comedic timing and flair for dramatic roles.

These days, he's a tad eccentric, but still remains a big name in Hollywood. LeBeouf became one of the biggest movie stars in America by taking on more diverse roles once he grew out of childhood. This next glow-up is a fan-favorite.

Recognize this little lady? She was the famous star of That's So Raven, of course! Who can forget the face she'd make every time she had a psychic vision?

That's So Raven ended in November of 2007. After appearing in various other movies and TV shows, Symone has recently become a popular fixture on the daytime talk show circuit. Ready for a mind-blowing transformation? Click to the next slide!

Another That's So Raven alum, Brown played Eddie Thomas, one of Raven's BFF along with Anneliese van der Pol. He also appeared in an episode of the Disney show Lizzie McGuire.

Brown made the leap to movies after his run on the show ended, most notably starring in Major Payne. Unfortunately, he's hit some hard times since the show, having been arrested several times for substance abuse violations and disturbing the peace. You'll probably recognize the next bombshell...

She's known for both her role in High School Musical as well as her relationship with Zac Efron. What little girl didn't want to grow up to be just like Gabriella?!

Though she might not be playing high schoolers anymore, she's still portrayed some hardcore partyers in films like Spring Breakers and Sucker Punch. Brace yourself for this next one!

After getting her start playing Mitchie Torres in Camp Rock (which also launched the Jonas Brothers) and Sonny Munroe on Sonny with a Chance, Demi Lovato has changed a liiiiitle bit since her Disney days.

Nowadays, she's putting out incredible jams like "Cool for the Summer" and singing the National Anthem at the Super Bowl. She's also been candid about her struggles with eating disorders in the past and has become a positive role model for her young fans. This next former Disney star looks SO different today.

Our girl Selena started her acting career on the Disney Channel's Wizards of Waverly Place playing a teenage wizard and even appeared on The Suite Life of Zach and Cody.

Beyond branching out into music, she's also cast off that squeaky-clean Disney image. Her role in Spring Breakers was significantly more mature than anything Disney would even dream about referencing on its network, and she would also executive produce the edgy (in the wrong way?) Netflix series 13 Reasons Why. Prepare yourself for a major hunk on the next page!

Another alumnus of Wizards of Waverly Place, Jake T. Austin not only made his mark on the Disney-verse, but he also has some Nickelodeon cred, providing the voice of Diego in Go, Diego, Go!

While his turn to the grown-up side of the business has been less pronounced than some of his former Disney pals, he's still focusing more on adult-targeted entertainment, taking a turn on Dancing With the Stars and playing Jesus Foster on the Freeform show The Fosters. You probably had no idea that this next heartthrob had such wholesome roots.

Making a name for himself alongside his twin brother Dylan, Cole Sprouse hit it big with his Disney Channel show The Suite Life with Zach and Cody. He played either Zach or Cody (I don't know if it matters which).

While Dylan's given up on acting, Cole has gone on to play perhaps the moodiest (and therefore silliest) character on the CW's Riverdale, Jughead Jones. My man spends season one of that show solving a murder, something that happens very infrequently on the Disney Channel. You're definitely not ready to see what our next Disney star looks like now...

While that show was a mega-success, it didn't take long for Miley to decide she wanted to be a sexy-ass grown up, and she set the mold for Disney channel stars who wanted to re-invent themselves. After taking off all her clothes and riding on a wrecking ball, Miley twerked on stage at the VMAs. How many former Disney stars do you think wish they could've started a conversation about cultural appropriation? I bet the answer is "a lot." This next former Disney starlet took a page out of Miley's book.

And in what might be the biggest thumb-in-the-eye to Disney we've yet seen from one of its former stars, Thorne went out and directed an explicit adult movie. She even won an award for it, so maybe she's found her niche? You've probably been seeing this next celeb everywhere lately.

Along with Bella Thorne, Zendaya was the co-headliner of Shake It Up. They were best buds having a fun time on a dance show! They got into many silly adventures! Haha, I bet it was a great time!

Now she does a ton of drugs on HBO's Euphoria and contemplates whether or not the bleak existence we must all suffer through could ever be worth it. Not sure if that came up that often on Shake It Up. This next former Diz star will make you do a double-take.

Oh Phil of the Future, you were the best Disney Channel show in the mid-2000s. It was on that show that actress Aly Michalka debuted, playing Phil's crush Keely Teslow.

Nowadays, Michalka is part of the band Aly & AJ (who you might remember from their jam "Potential Breakup Song") and acting in more grown-up movies like the creepy Leighton Meester-lead thriller The Roommate. The next glow-up features the quintessential Disney star who we're all still obsessed with today.

And now we come to Lizzie McGuire herself, Hilary Duff. It wouldn't be unfair to call Hilary Disney Channel Royalty, having earned the honor of being the only Disney Channel star who got to play an animated version of herself on Lizzie McGuire. (Side note: why were those parts animated? I don't think they did anything that needed to be animated? It's not like Hilary was playing, I don't know, a cat version of herself or anything.)

Hilary did her best to branch out, playing a spoiled rich girl alongside her sister Haley in Material Girls and releasing albums. But just when she thought she was out, they pulled her back in, as Disney just roped her back into playing Lizzie McGuire again in a sequel series. I had a major crush on this next Disney stud.

Finding fame alongside his brothers Joe and Kevin in their band The Jonas Brothers, as well as staring in the Disney Channel Original Movies Camp Rock and Camp Rock 2: The Final Jam, Joe Jonas was a heartthrob who found himself plastered on many a teen girl's wall in the late 2000s.

But when The Jonas Brothers split up, Nick went in a different direction, releasing solo albums and taking up a hosting/ mentoring gig on The Voice. Ready to find out the surprising way one of Hollywood's biggest stars got their start?

Look at that little punim! If you saw little Ryan Gosling back in his days in The Mickey Mouse Club (where he got to hang with Britney Spears and Christina Aguilera, which seems chill), would you have guessed he'd go on to become the absolute standard-bearer for hotness in this, the year of our lord 2020?

Ryan Gosling has gotten so far away from his Disney-fied image, it's hard to imagine that the guy who just killed a bunch of dudes in Drive and was so hot he literally became a meme dancing and singing with a cartoon mouse. The next bubbly blonde looks like a whole different person now!

Ashley Tisdale was a dual-threat for Disney, performing in both their High School Musical movies and The Suite Life of Zach and Cody. And it's easy to see why Disney would get so invested with her, what with her earnest, fun energy and obvious singing talent

But when it was time for her to move on from the Disney machine, Tisdale went hard after some adult roles, playing the lead in Scary Movie 5 and appearing as an escort on FX's Sons of Anarchy. This last glow-up is arguably the most impressive...

Known as a teen heartthrob alongside Vanessa in High School Musical, Efron impressed fans with his singing, acting, and dancing skills, which he'd later go on to use playing Link Larkin in Hairspray.

Zac Efron has made the seamless leap to Hollywood adult stardom, popping up in movies like Neighbors and That Awkward Moment. Oh, and let's not forget that he even played serial killer Ted Bundy in Extremely Wicked, Shockingly Evil and Vile. I think it's safe to say that he's left his Mickey Mouse days behind him at this point.