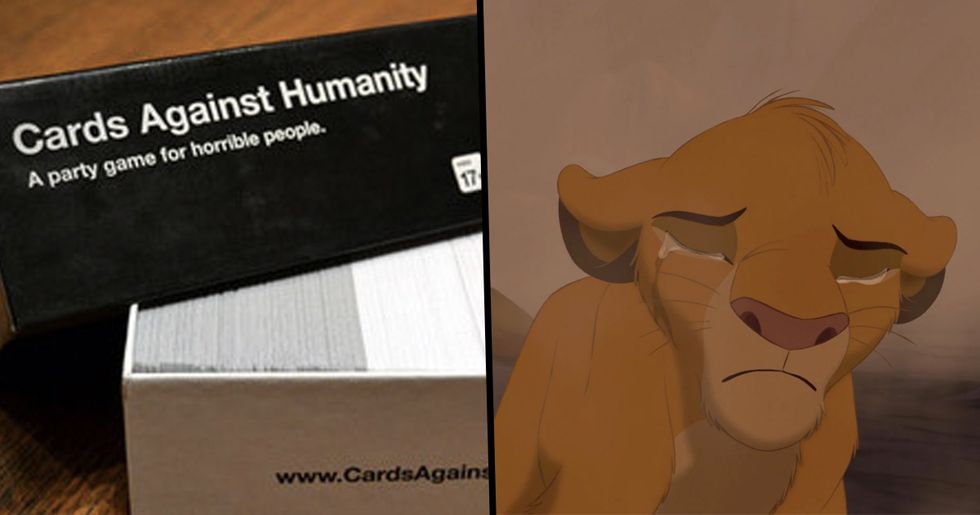 Disney-Themed 'Cards Against Humanity' Will Completely Ruin Your Childhood

Disney, as you all know, is the monolith of a company who pretty much has a monopoly on bringing children joy. (Hershey's might be the other one.) Between its movies and TV shows and TV movies and theme parks and merchandise and magic, Disney has created a true world of wonder. It is no doubt that snarky game-makers came along and tried to ruin it.

I have to admit, it really is funny when innocent Disney characters are put in more adult-like situations. That is the idea behind several new knockoffs of the classic game, Cards Against Humanity. These versions, "Cards Against Disney," take the naughty, dirty hilarity from Cards Against Humanity, and places it all within the world of your favorite Disney movies. You've never pictured some of the images that are about to enter your mind. I can almost guarantee it.

Family holidays used to be so dull.

But when you need things to turn weird and freaky, when you need a laugh with the people you're with, there's one solid place to turn.

Cards Against Humanity is a reliably hilarious game. As long as you have a group of people with a sense of humor, CAH is for you.

If you've never played, I'm not really going to explain it. Just play it.

OK, fine. Basically, you pair the black cards, which are missing a word or a phrase, with your choice of hilarious, white card, which are often raunchy suggestions for things you've never dreamed of.

Everyone playing submits their funniest white card to the person who chose the black card.

The person holding the black card decides which one is the best, and that person wins the round.

Oh, it gets meta. You can't play this without laughing your face off.

CAH is the best way to get your least fun family members out of the den.

It takes a certain sense of humor to participate in this game. And everyone knows the people who don't find CAH funny are not worth hanging out with.

Because the game has become so popular, they've started making themed expansion packs.

This is the theater pack, "for the annoying thespian in your life." Oh, we all have one of those.

The weed pack speaks for itself.

Adding fun, new cards to the game just keeps it fresh and funnier than ever.

The geek pack is for all the nerds out there.

With CAH, you can pretty much infinitely add cards with different themes, and it will be just as funny as ever.

These are actually presidential packs.

Yes, that's right. CAH got political for a minute there. That's another way to get your mean, racist relatives out of the house.

They've got a pride pack!

And yes, even a period pack! Is there any pack CAH doesn't have?

Sort of like magic. This one's for the Harry Potter fan in your life.

Then there's "Cards Against Springfield."

For the person you know who is obsessed with The Simpsons. Some of these are real games you can buy at the store, and others are digital downloads.

There's even "Cards Against Star Wars!"

"This is not the PRINCESS LEIA'S GOLD BIKINI you're looking for." I made that up, but it's pretty good.

Finally, we have "Cards Against Disney."

There are several versions of this game, all of which I believe fall under the category of "super unauthorized." It will soon be clear why.

This version of "Cards Against Disney" comes in a black box much like the official CAH game.

This "Cards Against Disney" pack, which you can buy on Etsy, is pretty funny.

It includes 15 white cards and five black cards, which can easily be added to your regular CAH deck.

Then, there are these downloadable bad boys.

Want to destroy your friend's childhood? Then you probably want Cards Against Disney. Yep, it's a Disney themed Car… https://t.co/R3ZyAHN2ix
— ninjamitton (@ninjamitton)1542118380.0

Wow, these are getting naughty. I don't think I can even type most of these out here without blushing.

And here is another downloadable PDF version of Disney cards.

They might not look exactly like the other Cards Against Disney cards, but they will ruin your childhood just as completely.

I have a feeling Disney isn't too thrilled with these versions of the game.

But who are we kidding? They are hilarious. Let's take a closer look.

Again, to be clear, this is not Disney-approved Disney.

This game is very much for adults who would like to laugh at the twisted, raunchy versions of Disney these sick game-makers have invented.

This is one of the tamer pairs I've seen:

Seriously, with "Cards Against Disney," this is about as appropriate as you get. I'm just warming you up.

Next, this one is just too good not to share.

Sometimes, the cards like, actually match up, and that's pretty funny. These are both from Aladdin, of course.

Who knew that Beauty and the Beast took place in the same universe as The Lion King?

But really, I guess if Maui shape-shifts, everything on him shape-shifts too. Something to think about.

Here are even more. I'm sorry. But I'm also not.

These are all quite disgusting. But that's the point of playing CAH, isn't it? Isn't it? Maybe I really am sorry for sharing this with you.

Because now your childhood is destroyed forever.

I think that if you are an adult who grew up on Disney, this game is sort of like a rite of passage into adulthood.

If you can't read these two cards without giggling, you're not really an adult.

But also, this is too funny for its own good! Whoever came up with these deserves a medal, and also probably to be banned from Disney theme parks worldwide.

OK, just one more before I go.

I can't. "Goofy's glorious penis" is maybe the funniest phrase ever uttered.

And I'm officially disappointed in myself.

So go forth and ruin your own childhoods with "Cards Against Disney." Share with the biggest Cards Against Humanity/Disney fan you know!