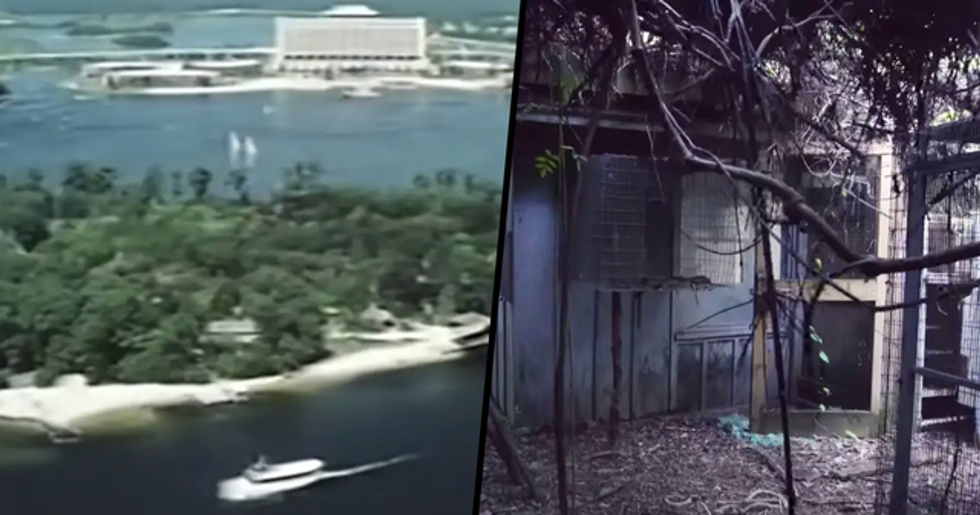 When you think of a Disney theme park, your mind likely goes to the happiest place on earth. But there's one Disney area that is decidedly less bright and joyful than the others. The abandoned Paradise Island closed in 1999 under mysterious circumstances and remains closely guarded to this day.

But some dedicated detectives have managed to get onto the island, sharing a pretty weird video of the abandoned park online. From a derelict bar to an eery animal hospital, keep scrolling for some of the strangest (and spookiest) Disney pics.

When you think of Disneyland...

It's likely your mind will picture an image like this. Happiness, fireworks, and pure, unadulterated joy is the game.

But there's one Disney theme park unlike any other.

Because instead of bustling crowds of happy tourists, it is totally (and creepily) empty.

There's an island owned by Disney that was once a theme park - but now lies empty.

It's un-signposted and totally closed off to the public. Not even Disney employees have permission to enter.

It was once designed as an amusement park.

But since it mysteriously closed in 1999, the park has fallen into disrepair - and now looks undeniably creepy.

The island was originally opened in 1974.

It was originally called Treasure Island, inspired by the Disney movie of the same name, and had a pirate theme.

It was renamed Discovery Island in 1976.

And the theme was changed from pirates to exotic wildlife. It was designed as a calming respite from the madness of the main park.

The wide variety of species of birds. From flamingos to ostriches to cockatoos, there was a bird to suit every taste.

The park closed down, and the abandoned island was left to fall into disrepair. What was going on there was a mystery for a long time.

Because a YouTuber called Matt Sonswa decided to launch an investigation into the mysterious Discovery Island, recording all he saw - and the pictures are pretty intriguing.

His video starts at the park's entrance.

You see the dock where tourists would queue up to catch the boat back to the mainland, now overrun with plants.

The ticket stand still looks totally new, even as it stands beside a chained gate.

Sonswa then came to a cafe.

The Thirst Perch was the refreshment stand and snack bar closest to Discovery Island's entrance.

The old animal hospital and nursery. It reportedly also functioned at the Island's headquarters.

Inside the building, there are still coolers filled with medications for the birds of days gone by.

But it's clear some parts of the building are on their last legs.

In some areas, entire walls and ceilings have fallen down.

The bathrooms are particularly overrun.

There are some undeniably creepy sights.

Like this lone incubator left behind in the center of an empty room.

And the entrance seems oddly unaffected by the ravages of time.

The attraction allowed tourists to get on the birds' level - literally.

The walkways allowed families to experience up-close and personal interactions with the Island's wildlife.

Although now they aren't so safe.

Many of the walkways look less than sturdy, and some have even caved under fallen trees and other debris.

There's an odd sense about the place.

The fact that so much stuff was left behind suggests the place was left in something of a hurry.

Where once you can picture bustling crowds...

Now guards are employed by Disney to prevent intruders accessing the Island. Even so, the old ice machine still stands.

There are even creepier sights.

Like this pile of old animal cages. It's a wonderful example of nature taking back over a manmade structure - as creepy as it looks.

So what does the future hold for Discovery Island?

Some believe it'll be turned into luxury villas for Disneyland visitors - although others claim the land is unusable thanks to pollution from the years of nightly fireworks. Want to see more pictures of an abandoned Disneyland? Keep scrolling to read about the weird events that turned a Disneyland park into a "ghost town."