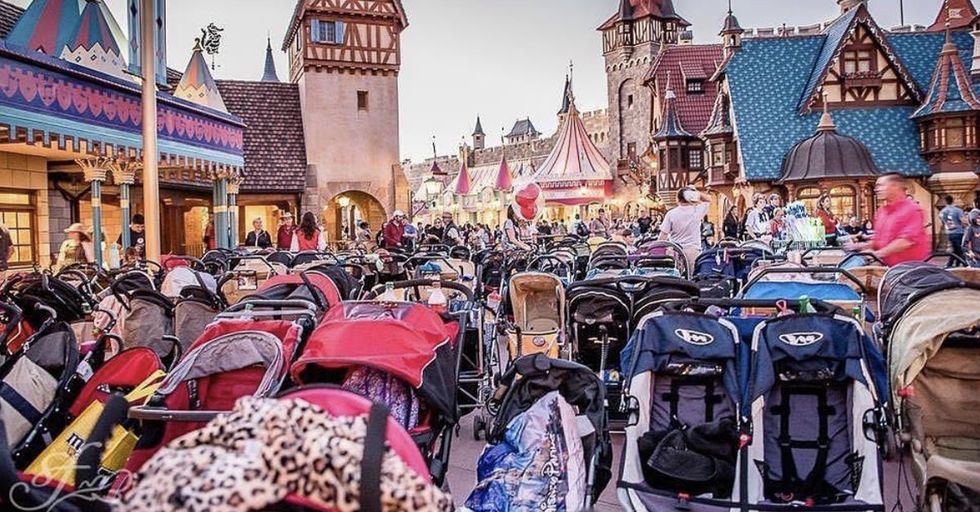 You'd think the happiest place on earth would imply that there are no rules, but this theme park is putting its magical foot down and setting some restrictions that might upset some of its fans.

Although strollers are the easiest way for parents to move their little ones around, it can cause some serious congestion and traffic at the park. Have you ever waited for the Disney parade at the end of the day and had to compete with a million strollers and fear that your ankle might get ran over? It's easy to see the love-hate relationship that people have for strollers.

Disneyland and Disney World have updated their stroller policies, making some parents pretty upset while others are rejoicing at the news. Hopefully, this doesn't affect too many people's attendance, but I think a lot of crushed toes will be avoided and there won't be any irritated heels from the road rage of an angry Disney mom.

It's hard not to love this place.

It's a theme park unlike any other theme park, and it truly is the happiest place on earth.

But there are two types of people in this world.

Some people could care less about Disneyland and some people have an absolute meltdown at the thought of stepping foot in the Magical Kingdom.

Thank god we have this GIF.

This little girl's reaction to her Disneyland trip gave us one of the greatest GIFs of all time. It's just way too relatable.

But we all know what we're getting ourselves into.

Kids running around screaming, incredibly long lines, overpriced but almost totally worth it food. It's just what comes along with all the magic.

But some things are going to change at the park.

Recently, some new rules were announced by Disneyland and Disney World and fans are having a lot of mixed reactions.

Disney announces that starting May 1, smoking and certain large strollers will no longer be allowed inside Florida… https://t.co/Y1g9nE6SGR
— CNN (@CNN)1553796604.0

Disneyland and Disney World are banning certain strollers and saying goodbye to smoking. This has been breaking the internet and Disney fans all over the world are having some intense reactions.

Know before you go.

Alright, let's break this news down before you burn your annual Disney pass that you pay extreme amounts of money for. We don't want to overreact just yet.

There are some restrictions.

Strollers will still be allowed, but it's the size that the theme park is really cracking down on.

Say goodbye to those stroller wagons.

Did you hear about Disney's new stroller restrictions? No wagons or larger strollers! What do you think about this?… https://t.co/VRB2xaduOa
— Jennifer Ketchmark (@Jennifer Ketchmark)1553860355.0

It could be a radio flyer, or it could be one of those four-wheeling wagons that can almost shatter your toe if it runs you over, whatever your wagon is, it will not be allowed in the park anymore.

The dimensions make the difference.

Some strollers won't be affected while others will not be allowed into the park at all. Size matters people.

Get out your measuring tape.

The new restriction requires that the strollers are 31 inches wide and 52 inches long or smaller. Don't go throwing out your stroller before you measure it.

It's all about guest flow.

"Walt Disney World Resort makes updates from time to time, and the reduction of stroller sizes is intended to ease guest flow and reduce congestion, making the park experience more enjoyable for everyone who visits," Disney wrote in an official statement on their website.

Disney is recommending using their strollers.

Renting a Disney stroller is potentially your best option, but that also is upsetting to some parents. The rental rates aren't terrible, but it just adds to your already extensive and expensive list of Disney purchases. Basically, it's $15 to rent a single stroller for the day and $30 to rent a double.

And they aren't the most comfortable strollers ever.

They are made of hard plastic and some kids don't love sitting in them, which is understandable considering they might be used to a their own stroller which is hopefully more comfortable than plastic.

The new rules will be applied soon.

May 1, 2019 is when the new stroller rules will be applied, so you've got a little bit of time to bring your giant wagons.

Same with the no-smoking rules.

This goes for vapes, too.

"Smoking and vaping are only permitted in designated smoking areas," Disney announced. Save your E-cigarettes and Juuls for your frat parties because Mickey and all his friends won't allow you in with them.

I mean, there are a lot of strollers at Disneyland.

Every corner you turn, there's an army of strollers headed your way. But if you've been going to Disney for a while, you're just kind of used to it and do your best to not get trampled.

This is a pretty common sight at the theme park and Disney has finally decided that this isn't the most space efficient method for their park, especially with new rides in the works.

They've got to make way for Star Wars: Galaxy's Edge.

With the new expansion coming to the park, it definitely makes sense that some adjustments needed to be made.

But we do love seeing some strollers.

I mean I happily support these strollers being pushed around.

Some people really are not mad.

Our ankles will finally be safe from the dreaded stroller attacks!

2019 is not playing games and you know it's serious when Disney gets involved.

For those that don't have kids, this was a moment of true celebration. Easier walking routes, less congestion and hopefully no more dodging road-raged parents.

Apparently, the news is making some people's dreams come true.

Other people are shook.

Considering this is a great place for kids, some were shocked by the new restrictions and concerned for families with little children.

I hear this loud and clear.

This is most likely going to make life quite difficult for some parents, especially those with twins who are used to having larger strollers to accommodate their children.

Oh, and no more dry ice.

I have no idea who was bringing in dry ice to Disneyland, but this rule is for you! No more dry ice or loose ice in your ice chests.

Petition for a few new rules?

Some people are hoping they invite some other well-needed rules at the parks, like forcing everyone to wear deodorant because people really do not do this already.

Since this is affecting Disneyland and Disney World, some people are hoping this will encourage other parks, like Universal Studios, to have these rules as well.

Although the new restrictions may sound dramatic, there are many strollers that will still be allowed into the park.

Clearly, there are some mixed emotions.

Are you pro-stroller restrictions or an advocate for allowing all strollers in the park? Share this article with your fellow Disney lovers to see how they feel!