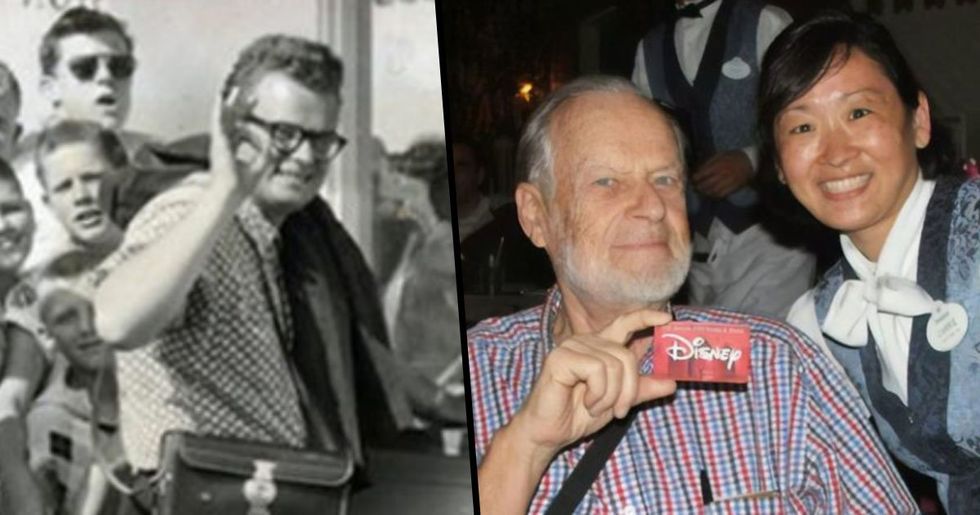 Over the years, around 750 million people have experienced Disney's magic first-hand by visiting Disneyland.

Yet, out of this staggering number, there will always be that person who was the first guest. It's quite mind-boggling to think about, but that person exists. And now, he's revealed what life is like as Disneyland's first-ever customer... And it sounds pretty darn good.

This dedicated Disney fan was gifted with a lifetime pass as an acknowledgment for his efforts, and he has returned every single year since 1955.

Keep scrolling to read the full story, and to see Disney's original guest.

Disneyland is the most magical place on Earth.

Though there are now 6 Disneyland parks spread across the world, California's park is the O.G of all the Disneyland/Disneyworld franchises.

The park first opened its doors in 1955.

Nearly half of the United States' citizens gathered around their black-and-white television sets on July 17, 1955, as California's Disneyland was finally unveiled to the public.

And people were able to get a first, yet slightly grainy, look into the theme park.

It was a highly anticipated event.

After more than 2 decades of planning and a breakneck year of construction, Walt Disney had transformed a 160-acre orange grove in Anaheim, California, into a $17 million theme park. Here, Disneyland was born.

Thousands of people flocked to the park on its opening day.

The theme park expected a crowd of 15,000 people at the invitation-only opening... However, a staggering 28,154 passed through Disneyland’s gates thanks to counterfeit tickets.

It was complete chaos.

The park's staff, who had been nervously awaiting their first customers, were completely overwhelmed by the hordes of people flooding through the turnstiles. For years to come, Disneyland workers referred to the opening day as “Black Sunday."

The lines went on for miles.

Everyone was keen to immediately experience Walt's creation so the lines were long. And this wasn't even at the park - cars were backed up for 7 whole miles along the Santa Ana Freeway.

But, out of all these people...

There is that one person who was at the very front.

Not the second, not the third...

The first. The first regular member of the public to buy a ticket and walk through those magical gates.

Quite the achievement, isn't it?

At the time, Dave was a twenty-two-year-old college student.

The week that Disneyland debuted, Dave was at home in Long Beach watching the news coverage on his TV. After watching the festivities and excitement unfold, he hatched a plan.

He decided that he wanted to be the first Disneyland guest.

Speaking of his decision, Dave explained: "I decided I wanted to be the first in line. The first person to go into the park who wasn't a relative of Walt's or some celebrity. The first regular guy to go in through the front door."

So, the night before the opening...

Dave jumped onto his motorbike and embarked upon the 10-mile trip from Long Beach to Anaheim. When he reached Disneyland, he walked over to the nearest ticket booth and started a line... at 2 am. Talk about dedication.

He camped out overnight...

And, when the sun came up on the morning of July 17th, Dave purchased the first ticket to be sold to the general public - thus becoming the very first person to enter Disneyland on its very first regular day in business. He was photographed as he bought his ticket, where he gave a cheeky smirk and "OK" hand symbol.

He hasn't changed a bit!

But he did keep hold of this little piece of memorabilia. "Back then, folks would pay for admission and then buy books of tickets for various attractions. I don't know what happened to the admission ticket for which I paid a dollar. But at the same time, I was given this card."

Dave was gifted with a lifetime pass.

Every year, Dave received an annual pass which allows him and 3 other guests free entry in any Disneyland park. Where can I get one of these?!

And he has returned to the park every year since.

"Each January I eagerly await the arrival of the next installment of the pass which is then good for another year at any Disney park, and I have received these annual passes since 1955." Dave explained, "In the beginning, it was just a paper or cardboard pass and for years it was silver. In recent years it has been red in color and is made like a credit card and says on the front 'VIP MAIN ENTRANCE PASS.'"

He didn't get to meet Walt Disney. Walt Disney himself was at the grand opening but disappeared shortly after opening the gate, leaving many people, including Dave, slightly disappointed. But despite this disappointment, Dave has nothing but fond memories of the day and marvels at his accomplishment. "Being the first member of the public to buy a ticket at Disneyland on July 18 1955, and seeing the 6,000 people behind me in line when the gates opened, and seeing Walt Disney himself is something I will never forget!"