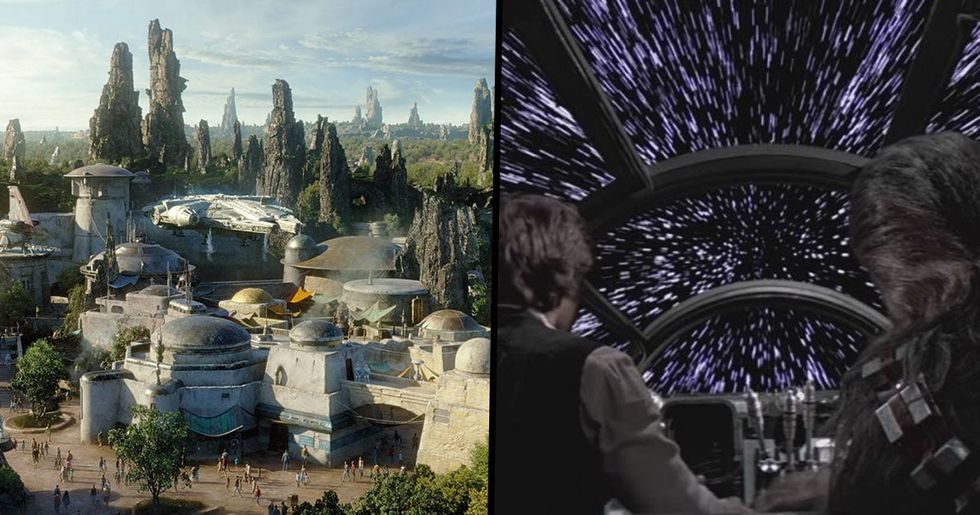 Unless you've had your head firmly planted under a rock, you'll have noticed the resurgence of fan interest in the Star Wars franchise of late. As the newest movie additions are released, fans both old and new are thrilled to be re-entering the fantastical world. And the films' successes are being celebrated in one of the most exciting ways - through a Disneyland ride.

Star Wars and theme parks fans alike are waiting on tenterhooks for the unveiling of the newest Disneyland ride. Inspired by the newest additions to the ever-popular franchise, Star Wars: Galaxy Edge is set to be an absolute spectacular. Based on some new behind the scenes footage of the ride's construction, it looks to be, quite simply, epic.

So when will we be able to enjoy this incredible ride? Well, release dates are up in the air - although we believe it may be sooner than you'd think.

Star Wars is one of the most popular movie franchises ever.

It all started with what's known as the Original Trilogy (A New Hope, The Empire Strikes Back, and Return of the Jedi) which came about between 1977 and 1983.

What followed is known as the Prequel Trilogy.

These three films were called The Phantom Menace, Attack of the Clones, and Revenge of the Sith, and came out between 1999 and 2005.

The franchise is beloved by fans.

The Star Wars universe is filled with memorable characters, like Yoda, Chewbacca, and Darths Vader and More.

It even has its own commemorative day.

Star Wars Day is celebrated on May the 4th - as in, "May the 4th be with you." Basically, it's an entire day based off of a bad joke, which we're all for.

The final trilogy of the franchise is still in the works.

It started with 2015's The Force Awakens, which was followed by 2017's The Last Jedi. The final movie of the trilogy (and supposedly of the franchise overall) is set to drop later this year.

There have also been theatrical spin-off movies.

In fact, many have a reputation for being real sticklers for detail. Nonetheless, we love a good meme, and Star Wars fans are more than willing to provide.

As you may expect, fans are very excited for the last instalment.

Episode IX is reported to be set one year after the events of The Last Jedi. It's due to come out some time in 2019, although no dates have been set yet.

Another thing fans are excited for?

There's a new Star Wars ride coming to Disneyland. Dates aren't set yet, but it's supposed to be coming out in June 2019. Yahoo, indeed!

The ride will be the latest in a long line of Star Wars amusements.

The Star Wars rides include the world-famous Star Tours in Disneyland Paris, and Hyperspace Mountain, which opened in 2017.

It's based on the newest films of the franchise, and the official Disneyland website sets the opening date as Fall 2019.

A recent video has got fans even more excited.

The two-minute behind the scenes video gives fans a sneak-peek of what awaits them when the ride opens. And it looks epic.

The ride promises to be an incredible experience.

The ride promises to be "the most epic attraction we've ever built," according to Scott Trowbridge, Creative Executive of Disney Imagineering, in the video.

More details can be found on this podcast.

The hosts dedicate an hour to discussing the ins and outs (and ups and downs) of the upcoming ride. Star Wars fans, grab a snack and settle in!

The ride promises to be super exciting.

According to Alicia Stella, writer for the Disney and More blog, the ride has "more than 300 animatronic figures." The immersive ride will take land fans on Planet Batuu, then take them through the full story of the Resistance.

But the excitement doesn't stop there.

The other freshly released titbit? The ride is set to be a whole 28-minutes long!

For Star Wars fans, this is great news.

An almost half-hour long escape into a galaxy far, far away? Where do we sign up?

The trajectory of the ride has also been revealed.

Scott Trowbridge described the storyline in the teaser vid. "This attraction invites you to be recruited to the Resistance and stand up against the First Order. And you even come face-to-face with Kylo Ren. You make it through that, you get back to the planet, you'll be a hero of the Resistance and be celebrated throughout the land."

Needless to say, fans are pumped.

As the news broke, the internet quickly became highly excited. The anticipation for Star Wars fans is almost too much to bear!

At the time of writing, the announcement has over 3,000 thumbs up, heart and shocked face reactions, and nearly a thousand shares.

The preliminary pictures are enough to get anyone excited.

The CGI images released on the Disneyland site are absolutely incredible, and really give fans a taste of the quality of the ride.

It's safe to say fans are caught up in the excitement.

And with promises of an almost half-hour immersive experience of their favourite films, who can blame them?

Some weren't quite satisfied!

The new rumor going around for Disenyland's Star Wars ride is 28 minutes long which I don't mind if it was a solid… https://t.co/3Q8nlScpVd
— TheGalacticEmpire (@TheGalacticEmpire)1548357112.0

After all, if the ride could be half an hour, why not an hour? Why not two? Why not a full day??

Even for more casual watchers of the Star Wars movies, we bet this ride will be highly enjoyable. With all the work that's going into it, how could it not be?

Although there are some sceptics.

One of the top comments on the teaser video reads, "Really wish it was based on the original trilogy and not the new trilogy." Another fan comments, "This all looks amazing, and i'm so excited, but i'm a little disappointed that it's all based on the new star wars, and the original films will not be incorporated into this magical land. I understand that this is because Disney didn't own star wars at that time, but the originals are the basis and the most exciting films in my opinion. I feel a land with more of the original films incorporated into it would be so much better."

There's another concern about the ride, too.

The waiting in line time could be problematic. One Facebook user writes, "28 min long? so I bet the line will be like 3hrs long or more." A comment on the teaser video simply states, "The lines are going to be INSANE in the summer."

Although we're sure Disneyland will have thought of that.

Another Facebook comment aims to quell people's fears. "Why do people seem to be under the impression that the length of the ride has ANYTHING to do with the line length? It's not like they only send one group at a time! I mean, Pirates is a solid 10-15 minutes and it's one of the fastest moving lines. Breathe, people. Breathe."

For any Star Wars fan, the ride is a must.

While any specific details are limited, it's thought to include both immersive special effects and rollercoaster elements. If you want to feel like you're flying through space, this ride will (probably) be your best bet.

It's gonna be good.

According to the Disneyland site, Star Wars: Galaxy's Edge is set to open this fall. We're pretty sure, at 28 minutes long, it'll be worth the wait.