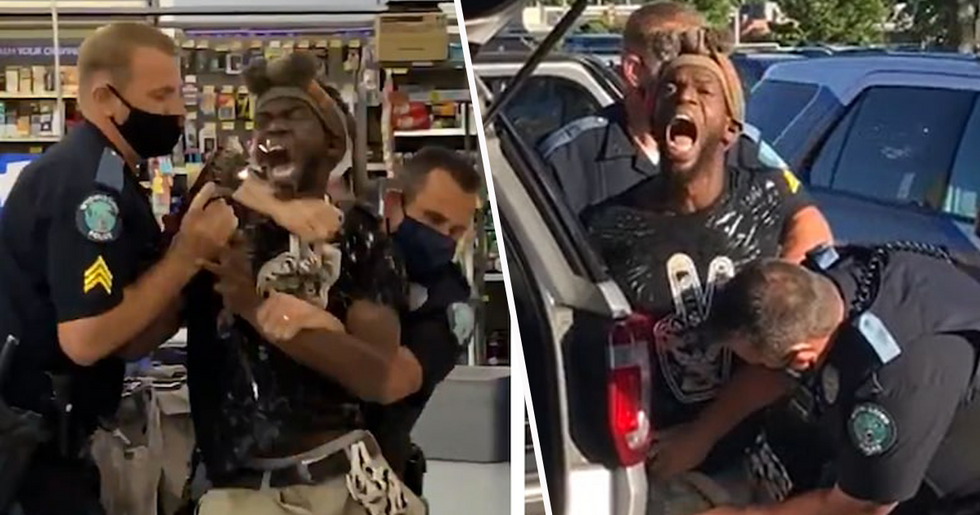 Distressing footage has been released showing a black man being tasered and hogtied for cycling a bike he just brought for his son.

This video is truly shocking...

Right now is probably the worst time to be a police officer...

And members of law enforcement here in America are now hated more than ever before.

Since George Floyd was brutally killed by a police officer...

People have been protesting and demanding justice for the black community.

Police brutality has been apparent for years in our country...

And there's no denying that black people are targeted way more than white people.

People have decided to start fighting back amidst the Black Lives Matter movement...

And things were quick to turn violent with many attacking police officers on the scene and getting themselves arrested.

It's a difficult situation...

And even though many police officers deserve to lose their jobs...

There is also the large population who don't at all deserve to be ridiculed and abused in the way in which they are being at the moment.

Whether that's being verbally abused in the street whilst on duty...

Or having things thrown at a police car, this behavior towards innocent police officers isn't acceptable.

This is what makes this situation so complicated...

It's difficult to distinguish the police officers who are wanting to do good and make a difference from the ones who are using and abusing their power.

But thanks to the power of technology...

Video footage allows for bad cops to be shamed for their disgraceful behavior and for others to prove their innocence. And some of the most recent footage is extremely distressing.

The incident occurred in Wyomissing, Pennsylvania.

Stanley Gracius was tased and hogtied by cops for cycling a bike he had just bought.

The distressing footage was taken by witnesses showing the incident happening at Walmart.

The first piece of footage shows Stanley wrestled to the ground by cops whilst he was near the cash register, inside the store.

He is insistent that he has a receipt and has paid for the bike whilst the cops ask him to put his hand behind his back.

He then repeatedly asked the officers to "please stop,"  but to no avail. Gracius is then tasered.

He repeatedly asks why he is being arrested but does not receive a response.

"Why are you doing this to me? I paid for my stuff! I have a receipt! Please stop! I didn't do anything wrong!"

Gracius had reportedly been testing the bike on the aisle and was not bothering anyone.

Too Fab reported that a Twitter user tweeted stating, "The kind man was test riding a bike through the store while playing some music and telling random strangers he hopes they have a great day and complimenting them. He was absolutely no bother to anyone."

"At the register when the man was paying for the bike, the officer grabbed his hand and twisted it as he tried to forcefully arrest him. I couldn't tell you the reason." You can watch the footage here...

"Tell me why a man who was ABOUT TO LEAVE THE STORE had to go through all of this at CHECKOUT. if he was bothering people (which he wasn't) they should have dealt with the situation more reasonably," she wrote. "They could have made him leave or kicked him out. there was NO NEED TO TACKLE AND TAZE THIS INNOCENT MAN. AS HE WAS LEAVING."

The second piece of footage, which was taken by another witness outside of the store shows Gracius continuing to protest his innocence as more officers show up.

Whilst outside, Gracius continues asking for the reason that he has been arrested and is eventually answered with "disorderly conduct."

Those around Gracius and the cops can be heard stating that "he did nothing wrong."

After a period of struggling to get Gracius in the car, a cop hogties his legs before finally shoving him into the vehicle. You can watch the footage here, but please be warned, this may be distressing to some. But there is more to this story...

Berks County District Attorney has responded to the incident by a statement to Facebook.

In the statement shared on Tuesday, it read, "The defendant was detained by the Wyomissing Police and at all times during the encounter, the Wyomissing Police showed restraint, acted professionally, and did a good job de-escalating the situation with the defendant, Stanley Gracius. Mr. Gracius did not in any manner abide by the requests of not only the store manager of Walmart, but also the requests of the officers themselves."

"Based on our review of this incident, the officers of the Wyomissing Police Department acted appropriately when they arrested this individual who was causing a disturbance in the Walmart store. The defendant was charged with Aggravated Assault, Simple Assault, Disarming Law Enforcement Officer, Resisting Arrest, Defiant Trespass and Disorderly Conduct."

In a further post, they add CCTV footage from the store, writing, "Consistent with our statement on Tuesday, we are releasing sections of the surveillance video we received from Walmart showing the behavior of Stanley Gracius on Monday, July 20th. In addition, we received video from an incident the day before in Wyomissing, where the defendant entered a store without a shirt, shoes or a mask, was confrontational with the store owner, and refused to leave for 9 minutes."

You watch the CCTV footage here...

Keep scrolling for more incidents where bodycam footage has been helpful...