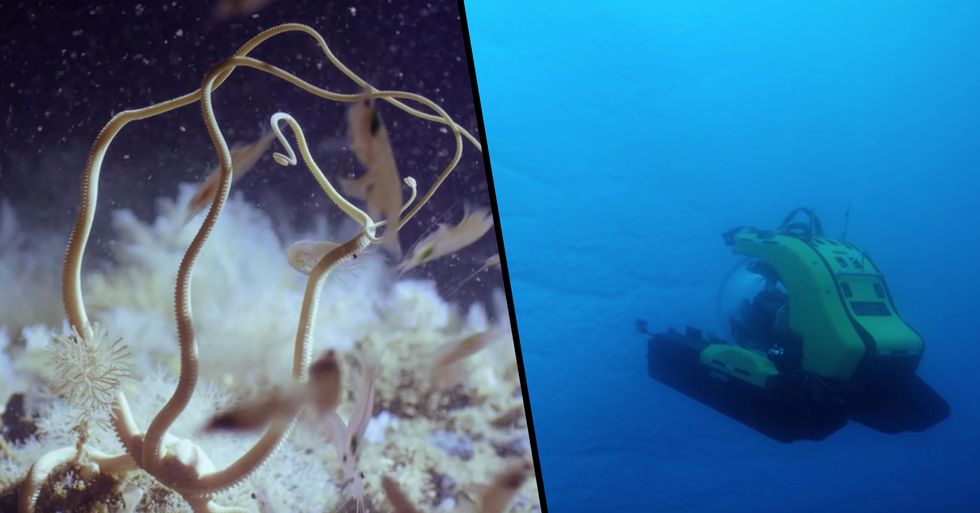 In a remarkable and groundbreaking accomplishment in the world of marine discovery, researchers successfully dived to the deepest depths of the icy Antarctic ocean, and what they found at the bottom was completely breathtaking, yet a little disturbing...

Keep scrolling for the full story, and to watch the footage from their dangerous mission for yourself.

Our ocean is one mysterious place.

Covering more than seventy percent of our planet's surface, the ocean serves as a vital support system for all living organisms.

Our planet wouldn't survive without it.

Yet, despite its importance, much of our ocean remains unexplored.

While our government prefers to throw (or waste?) it's money on sending man to Mars...

A staggering eighty percent of our oceans remain, untouched and unexplored.

Well, it turns out that diving to the deepest depths of the ocean is a lot easier said than done.

Thanks to the poor visibility and extremely high pressures of the ocean floor, it has proven to be virtually impossible for us humans to explore these dark and mysterious depths.

Scientists and researchers have had to rely on technologies such as solar mapping to learn about the secrets of the ocean.

Yet, even with these incredible sonar technologies...

Less than ten percent of the global ocean is mapped, leaving us to only wonder what lurks in the deepest depths.

What else could be out there?

While the sight of a Great White shark is enough to terrify most of us, we can't even begin to imagine what else lurks further below the surface.

But now, we have had our first glimpse.

Ocean X, an ocean exploration company that focuses on marine exploration and discovery, successfully completed the world's deepest dive in the Antarctic ocean back in 2018.

It was the deepest dive in history.

Using one of their high-tech submarines, researchers were able to dive to depths of 3,280 feet below the surface of the ocean.

It was a highly precarious dive...

The human body is simply unable to withstand the pressures of such deep waters, so the dive brought with it many risks. But, in the name of science, the brave divers went ahead with it anyway.

And what they discovered was simply remarkable.

It turns out that the dark depths of the Antarctic aren't as barren as one would have originally thought, because researchers found the ocean bed to be simply teeming with life.

The divers were completely stunned by what they saw...

And were shocked by the levels of diversity and life down there. Mark Taylor, a dive team leader in the submarine said, "To be honest, none of us were expecting very much. Every single one of us was just completely blown away by the amount of life we found."

It turns out that the Antarctic is home to a vast community of marine life...

Even more so than Australia's infamous Great Barrier Reef. "Within a square yard, there is more life in the deep of the Antarctica than there is in the reefs of the Barrier Reef of Australia."

Species of fish and coral that had never been discovered before were seen on the mission...

Including this peculiar looking piece of coral, which wouldn't look out of place on the set of Alien.

Then there was this thing...

A feathery, tentacle brandishing creature casually floated past the camera... Apologies for my lack of scientific jargon.

Okay, this one gets a big no from me.

The researchers stumbled across an arachnid looking creature crawling along the ocean floor. Nope, nope, nope.

They then came across a creature that they nicknamed, "The Deathstar"...

This stomach-churning creature can have up to fifty arms...

And each of these arms are covered in minuscule pincers, which instantly snap shut when touched - Almost like a venus fly trap.

The mission was filmed and broadcast on the BBCs Blue Planet II documentary...

And it completely blew everyone's minds. You can watch the full 5-minute video here, though be warned: It may make you never want to go in the sea again. For more on the wonders of our ocean, keep scrolling to read about the incredible young man whose life mission is to clean up all the plastic pollution...