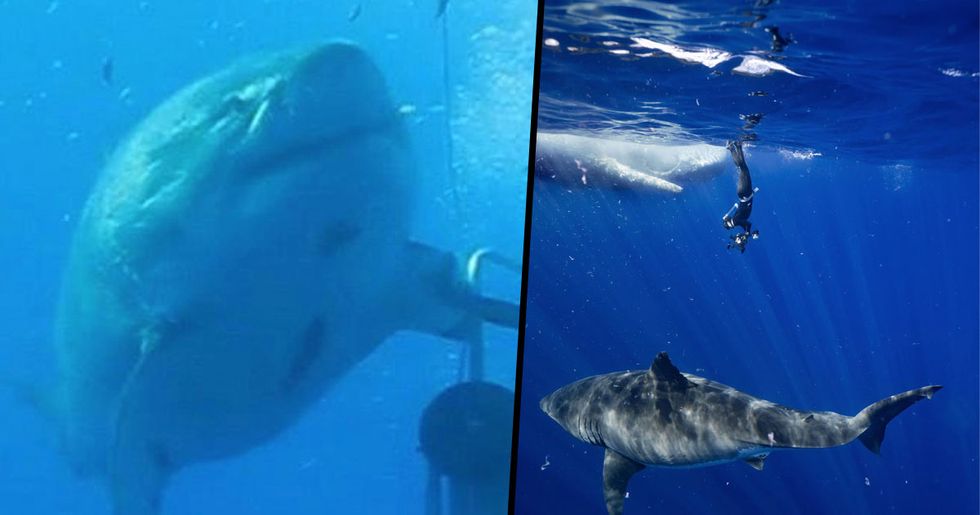 Hawaii is an exotic sounding place. Usually when you think of Hawaii, you might think of lying by the beach, drinking cocktails with flowers around your neck, or doing some rad surfing. But in the last week, Hawaii has been host to a sort of shark banquet.

Something attracted a whole new set of visitors to the Hawaiian coast - sharks. And they've have been making the most of this easy feast. But the visitor that really caught everyone's attention was Deep Blue, previously christened the 'World's Biggest Shark.'

A famous shark was spotted in Hawaii.

Earlier this week video footage was released of what could be the 'World's Biggest Shark' eating a whale. In fact the shark is well-known and has already been named Deep Blue.

A woman never shares her age.

Deep Blue was first spotted twenty years ago, and was already a fully grown adult. This means that she is at least forty years old, and it is suspected that she might even be fifty years old. But we will probably never know for sure, as it is only once sharks are dead that you can check their age by the rings around their vertebrae. We'll just have to let this remain as Deep Blue's secret.

How do we know that it was her?

Great white sharks have unique pigment patterns, sort of like how we have different fingerprints. In particular it is about the line of colour, where it changes from white to grey. It is most unique near the gills, fins and tail.

When was Deep Blue spotted?

Since 1999, the Marine Conservation Science Institute has been studying white sharks off the coast of Guadalupe Island, Mexico. She was one of the first ones that was seen, and it looks like she is still going strong, very strong.

Is she really the 'World's Biggest Shark'?

Yes! Well, probably. Measuring live sharks is a very tricky business, as you can imagine, and Deep Blue has never actually been measured. However, if you are willing to accept unscientific proof, many shark experts have spotted her, and no one has ever seen a bigger shark. So it seems like she is 'Probably the World's Biggest Shark', but that's not such a catchy name.

How big is she?

Although she has never been properly measured, she is at least 18 feet long, and scientists think she is probably 20 feet long. This is 3-5 feet bigger than an average female great white. To put that into human perspective, that's three times the size of LeBron James.

But is that really so big?

This means that Deep Blue is the same length as a giraffe is tall. But whereas a giraffe would weigh around 800kg, this shark will weigh over 1000kg. Who knew that giraffes were so big?

Deep Blue wasn't the only shark enjoying a Hawaiian feast.

At least three different sharks were spotted devouring the whale carcass of the Hawaiian coast. Plus there were at least ten tiger sharks that were seen feasting too.

What is the difference between tiger sharks and great white sharks?

Tiger sharks might sound fearsome, but in fact they are usually a bit smaller and weigh a bit less. However, it is in the teeth that there is the biggest difference. Great white sharks tend to prefer blubber which they rip and tear, while a tiger shark will eat anything and bite it with precision.

But great white sharks still have that creepy grin.

The classic grin of the great white sharks is creepy for a reason. Crammed into their mouth are 3,000 teeth, which can be rotated into use when they need them. In contrast, tiger sharks have rows of 24 teeth on the upper and lower jaw. These are what help them to cut through meat rather than just grabbing chunks.

How big was this whale that they were all enjoying?

The whale was a sperm whale, which is the fourth biggest whale type in the world. This makes it one of the biggest animals on the planet. It can grow up to 70 feet long and can weigh up to 57,000kg.

Was it really big enough to feed 13 sharks?

At 57,000kg, this whale will have weighed over three times as much as all of the sharks put together. That’s not as crazy as it might seem though. A cow weighs ten times as much as a human, but it could still feed forty of us comfortably.

Sharks eat a lot though.

Sharks eat in a different way to humans. They can eat one big meal and be done for up to two months. That's why they have to make it a really big meal, usually of about 30kg of meat. No wonder they were enjoying the whale, it will have been their equivalent of an all-you-can-eat buffet.

Why was Deep Blue there in the first place?

The simple answer is that Deep Blue was feeding. Usually females stay out in deeper waters until they are birthing. They don't usually go into such shallow waters, so close to shore. This was a simple case of seeing a big piece of delicious, decaying whale carcass and not being able to resist.

Since 1828, there have been over 150 recorded shark attacks around Hawaii, although most of them were not fatal. It seems like Hawaii is a common destination for the sharks, as part of their migratory route.

The sharks often stop off in the Hawaiian waters.

Most of the sharks that reach Hawaii have come over from California or Mexico, much like the human holiday visitors. They tend to spend spring and summer in the Hawaii and Baja California region, often travelling out to the Pacific Ocean. Then they spend the winters around Guadalupe Island, Mexico. It's alright for some!

Is it common for sharks to go on holiday like this?

Sharks resemble humans in this way. Some are local and stick to their own area. Some are coastal pelagic, which means they migrate along shallow waters and will go out foraging but always return. Then there are the highly pelagic sharks. These are the backpackers of the shark world. Unsurprisingly, the backpacker sharks often make trips to Australia, even from places as far away as South Africa. Classic backpacker.

This shark feast was just off the surf spot Kewalo Basin. It is not uncommon for surfers to come across sharks if they are out chasing the big waves further out. But sharks don't really like human meat. It's usually an accident if they get you.

How to avoid being eaten by a shark.

Sharks don't want to eat you, but if you are there at meal time and surrounded by food, it can be harder for them to realise that you're different. The best thing you can do is stay out of the known, shark-infested spots. This is particularly true if you are alone of if you are bleeding. Genius!

Shark attacks are not very common.

In the last ten years, there were sixty-one fatal shark attacks. That's an average of six a year. So yes they happen, but if you think of all the traffic accidents that happen, that doesn't stop you from crossing the road. It just makes you look where you are going. The same thing goes for swimming in the sea.

As a professional footballer, there is a one in 2,000 chance that you will be bitten by Luis Suarez. He has already bitten three players. Who knows who his next victim will be? In contrast, there is a one in 3.7 million chance of being bitten by a shark in the ocean. Suddenly the sea seems like a much friendlier place.

As pups the white sharks tend to eat fish, but as they grow in strength, they start hunting larger prey. They tend to prefer seals and dolphins, although they'll eat other mammals such as sea turtles too if they're hungry. They really go for the blubber, much like humans go for bacon. No wonder they were enjoying the sperm whale!

Sharks really enjoy fatty meat, so they would enjoy a whale, but whales are usually too big for them to go for. In fact, orcas are the only animal that hunts sharks, other than humans, so usually it's the other way around.

How did the shark know that the whale was there?

The shark was probably just roaming the seas, enjoying its holiday somewhat. But great white sharks can smell a single drop of blood in 100 litres of water. With an animal this size, it's no wonder the sharks came flocking from all over the place.

Sharks have killed people, this is true. And you should always be careful around them, but they are by no means the most deadly creature in the sea. Salt-water crocodiles, for instance, have a jaw that is ten time stronger than the jaw of a great white. Plus they can get us on land too.

We bet you can't guess what the most dangerous sea creature is.

Humans are the scary ones.

In fact humans cause far more damage to sharks than the other way round. Shark fin soup is a delicacy in many places in Asia. Shark finning kills an estimated 100 million sharks a year.

Sharks are endangered and that's an issue for everyone.

Commercial fishing is also killing many sharks, mostly by getting them accidentally caught up in their nets. But sharks are vital for the oceans' eco-systems. They keep the levels of prey right and are a vital part of the eco-system. It’s just like Mufasa explained; they're a part of the circle of life.

Save sharks by not watching Jaws.

Okay that’s not entirely true, watching Jaws won't actually kill any sharks. But the bad publicity is actually harming them. It is important to recognise that usually, they are not interested in you at all. If you stay out of their way, they won't come looking for you. You can do them a solid by not buying shark products too. If people don't order the shark fin soup, the fishermen won't be able to sell it, and maybe we can keep a few more of these bad boys in the water. After all, they are helping to protect the eco-system, one sperm-whale feast at a time.

Whether or not Deep Blue is actually the 'World's Biggest Shark', she is certainly an impressive specimen to behold. And even knowing that she is unlikely to attack you, I'm still not sure that I would want to be that close to her in the water. What do you think?