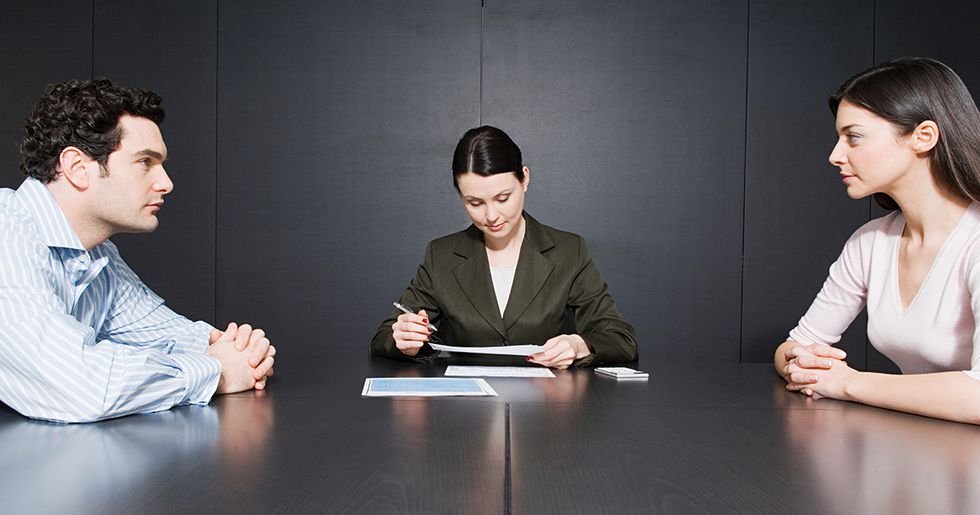 Every time I end a relationship, all my friends gather around and tell me how unreasonable I'm being; that is ludicrous; that I'm going to die alone if I don't get it together. And those friends are not wrong — I am very, very much alone!

And yet, because I'm now armed with a number of stories from divorce lawyers, I can say, "Well, at least my reason for breaking it off isn't this outrageous!" And they'll have no choice but to nod and be like, "You're right. In fact, we are the ones who are wrong, for questioning you. Here's 100 dollars to show that I am, in fact, sorry."

And now, I'm sharing these stories of divorce with you. Coming from the AskReddit subreddit, this thread asked divorce lawyers to share their craziest stories about couples who broke up for nonsensical reasons, and boy oh boy, there are some doozies.

Was a loud chewer at the dinner table. He developed a complex & literally needed out as he couldn't bear to eat with her. - TISM_riverphoenix

Taught the parakeet certain cuss words for his wife. Hahaha. The parrot lives with the man now. - brandonrandom9

Was the safety on?

And since you had to have your shirt deeply unbuttoned in those days...

My dad was a divorce lawyer. He had a client who wanted to divorce her husband for 2 reasons: He did not have enough hair on his chest. He did not drive fast enough. Keep in mind this was in the 70's when chest hair was a bit more important. - Bodhi_ZA

When you find the right tupperware, though? It's magic.

Neither side would follow the court orders. When they had to go back to court they were fighting over a pistol and the man's grandmother's bowls. I assumed for weeks that these bowls were some sort of heirloom or expensive china. When they finally brought the bowls in to swap they were f*cking tupperware. - Carcharodons

Money is the number one problem in most marriages.

She was kidnapped in Mexico and he refused to pay ransom. Eventually her family managed to pay and she was left on the side of the road. It is not outrageous as in petty but outrageous as how absurd that is. - mennej

And they act like getting addicted to multiplayer games is a new thing.

Still remember an early case i worked on, man divorced his wife for her Bingo Addiction. 10 to 12 times per week she went to bingo. She was 82 he was 86. - DRAGONPUTZ

How nice was the iPad case though?

This lady divorced her husband of two months because he got her an iPad case for her birthday instead of the expensive jewelry she wanted. - salamanderlemons

Going for the world record time.

He had an argument with the new in-laws during the wedding and moved out at around 5 am during the first night. - apolloxer

If it was from three years ago? Would've been totally fine.

The power of Christ did not compel them.

Failed exorcisms. Client had an inner ear condition that caused chronic vertigo, but symptoms could be treated with medication. Husband was an evangelical who was convinced his wife: 1) had become possessed and that her vertigo and general crankiness with his methods were evidence of demonic possession, 2) the medications she was taking was enabling the devil to hide inside her, and 3) the only proper recourse was exorcism. ... The final straw was that he tried to ‘surprise it out of her’ by pushing her down the stairs when they were heading out for dinner. - queequeg789

I see many payments in your future.

Ex-wife wanted sole L&P custody of the kids because the ex-husband was spending all his money on a palm reader/psychic and refused to pay child support. On cross, ex-wife's attorney got him to admit that he was spending all his discretionary income on this psychic. He said he had spent over 5,000 dollars on "readings" and other services there. Judges frequently chime in with questions in domestic matters, so my judge asked why he was not paying support as his divorce decree required. His explanation was i) the psychic could "read" that his children were provided for without his money and ii) he would be able to repay the ex when he takes the children to Mexico permanently to "seek great riches" there. Which my judge read as "my psychic told me to kidnap my kids". - SkipFirstofHisName

Are you Oedi-pulling my leg?

A friend of my mum has divorced her husband because his mother still coddled him at age 40, with his consent. They lived with his mother (common in Asia). By coddle I mean that she would walk straight into their room after his shower and powder his back for him. - doublechocolatecooky

I knew a guy from a high school job who divorced his wife of 2 months because she would sleep with a nightlight but he could only sleep in total darkness, as they apparently never lived together until after getting married. He hated her nightlight so much that he would often sleep on the couch instead, but sometimes he would claim the bed for himself and lock her out of the bedroom for the night. - yeerk_slayer

Friend of mine divorced his then wife because she would only speak French when her family would come over. She was Spanish, as was her family.... To add, her family spoke English, French and Spanish, he could only speak Spanish and English, she got bored of being married to him, her family basically talked about him whilst he was there, was only when he recorded a conversation whilst they where there and got it translated he found out what was going on. - StanMarsh01

A recently married couple (of 2 years) broke it off because the husband would not stop feeding the dog. The dog got outrageously fat. Apparently she saw connection between the dog and future children. - Bing-Wallace

I had a client file for divorce because every morning his wife would ask him how he takes his coffee... for seven years. - BlankSmitty

Was she supposed to wake up early and put on makeup?

Groom sees his new wife the morning after the wedding without makeup, takes her for an intruder, and proceeds to sue for over $10k for psychological trauma. - JennaLS

The boys in this family have ALWAYS eaten gluten.

My douche cousin told his wife she had three chances to give him a son. Daughter was born first. Strike one. Son was born second. Then they find out the boy can't eat gluten. So my cousin divorced her and has made zero effort to see his kids. - erfilmvictim

Their marriage could not Level Up.

I had a friend whose parents divorced for irreconcilable differences over time spent playing Everquest. - OrdinaryVisionary

How nice was the cat though?

Paralegal. A couple got divorced over a cat. Wife called cat Snowball because of white fur and only wanted the cat to eat wet food or chicken breast. Husband called cat Lily again because of white fur and believed it should only eat dry food. These two argued for a year over custody of the cat but did not give a sh*t about their human kids aged 15 months, 4 years, and 6 years old. - sxcamaro

My aunt had a case where the wife had glued all of the outdoor hoses together so he wouldnt spend more time washing his vehicle anymore. When the glue didn't work she just cut them all up. When he bought new ones, he filed for divorce. - amazinglymorgan

The Force was not with them.

I had a client incur about 20 additional hours of billable hours because he and his ex-wife were battling and went to trial over their Star Wars Collection. This was the only issue at trial, they were able to work out custody, child support, the house, but the Star Wars collection went to trial. The Judge ended up splitting it in the most assholish way possible, basically giving each side half of what they wanted and then mixing and matching everything else and breaking up 'collections'. When speaking about it at a conference, the Judge admitted she did it because if they were going to act like children, she would treat them like children. - GenXStonerDad

I was once buying a computer from someone on Craigslist and when I got to his house it was full of computers everywhere. There where monitors laying on the floor and half built computers laying around, full built computers all over the place. And I’m talking expensive gaming computers not your every day all in one computers. We got to talking about why he had so many and the guy said he was just obsessed with them and he confessed that the reason his wife divorced him was because “she said I was too obsessed with my computers." - WutANut

I knew a couple who split because she didn’t have the same musical taste as he did, so she just flipped! Kinda crazy. - Nox_aac

Hope he streamed the divorce on Twitch.

My aunt was dating an unemployed dude for a while. He was staying in her house rent free. They got married and were getting ready to go on the honeymoon when the new husband tells her he’s not going because he has to take care of his plants at the house. Big fight. Aunt goes on the honeymoon with her sisters instead. She comes home and tries to kick him out of her house, he refuses to leave. She tries to get the police involved. Dude is live-streaming on Facebook how he is being trapped in his own home. Police tell my aunt there is basically nothing they can do, can file for eviction after a divorce. Dude gets to live in her house with his precious plants for like 3 months until everything legally gets worked out. - tacojohns97

My favorite was a couple filed because they BOTH came out as homosexual. Filed for irreconcilable differences. Seemed amicable though. - Rnc88

"Honey, I told you pinball was important to me when we got together!"

Friend of a friend had just picked up a new pinball machine and was setting it up in the garage while watching his kids. One of the legs on the pinball machine starts to go, so he drops the baby, runs over to the machine (stepping on the kid and breaking the kid's leg in the process), but does stop the machine from tipping over. - alcimedes

The most delicious of deceptions.

My father’s best friend divorced his wife over her cooking. Apparently, everyday he would come home to amazing cooked meals. Here, she couldn’t cook at all and was ordering food from different restaurants. She even went as far as dirtying pots and pans to make it look like she cooked all day. She got a way with this for almost a year before he caught on. - Kratsas