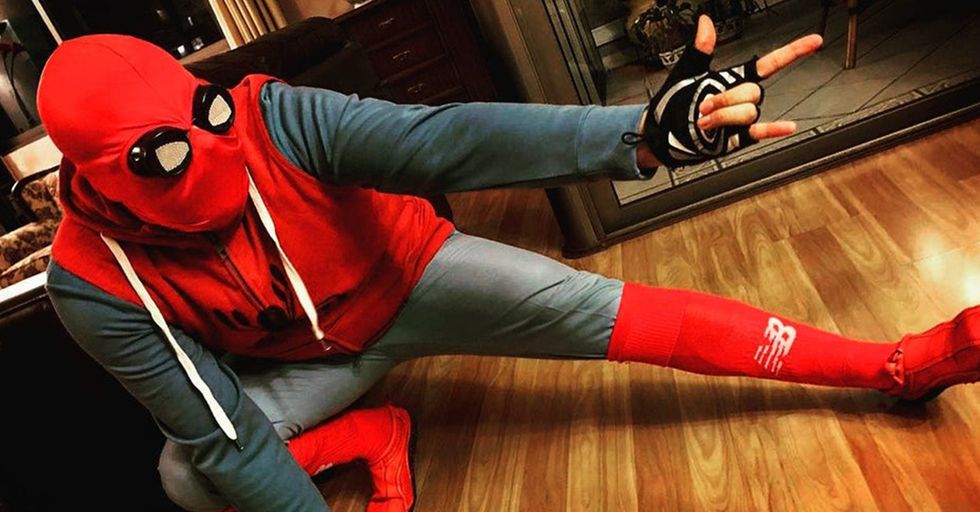 What happened to September? Somehow, it's over already, which means we've got to start thinking about Halloween costumes right now. Seriously, get started — you don't want to be like me, where every October 28th you wake up in the middle of the night in a cold sweat, realizing you don't have even half as much time as you'd need to come up with a clever costume so you'll just have to hope no one remembers you do this every single year and just end up wearing the Minnie Mouse costume you bought four years ago that everyone thought was really funny that year but has definitely worn itself out.

But if you just can't help your forgetful nature, here are some Halloween costumes you could make all by yourself, even if you don't get started until a few hours before the Halloween party. Check out the internet's best DIY costumes.

Daenerys Targaryen from Game of Thrones

Even though the last season of Game of Thrones let down, well, everyone, a lot of Halloween party guests will give you a high-five if you throw on a blonde wig and blue dress while you carry around a stuffed dragon.

Only '90s kids (and '80s kids, and probably a lot of 2000s kids too) will remember Ahh! Real Monsters, but so long as you have some construction paper, scissors, and styrofoam orbs lying around, you can tap into that nostalgia.

Do you have a bunch of black construction paper and a Sharpie at your disposal? Then your pineapple costume for this year is as good as done.

With the final movie coming out a few months ago, I think 50 Shades of Gray might be waning in popularity, so use this costume this year before it's completely forgotten.

Post Malone? He's got a ton of tattoos on his face. Ghosts? They live under sheets. Combine the two and you've got a costume that will make everyone you run into go "ohh, I get it" before they excuse themselves and never talk to you again.

If you've got long brunette hair, just wear a white button-up along with a sweater and a Gryffindor scarf to instantly be Hermione. (Don't pretend like you don't own a Gryffindor scarf. You definitely do. We all do.)

South Park has a great style for quick Halloween costumes because if you can draw any of these characters (and you can, they're a collection of very simple shapes), you can make a quick mask out of any piece of cardboard you can find.

Hell-ooooo! Robin Williams' most famous character who dressed up as a woman is a simple Halloween costume, assuming you can scrounge up an old lady wig.

Bob and Tina from Bob's Burgers

Ah, the old Halloween standby — characters who just wear regular clothes. These are the best characters to dress up as, because then you can go to a Halloween party and just be comfortable, as opposed to those poor dudes who dress up as Tetris blocks and can barely fit through any doors and spend the whole evening bumping into people.

Another character who just wears clothes, this is the perfect costume for a bearded man who owns a lot of tools and is always fed up with his friends with whom they host TV shows about tools.

A quick paper-folding session is all you need to make a 3D diamond that implies you're dressed up as a character from the ever-popular video game The Sims.

Looking to make a "funny" "joke" at the Halloween party? Then dress up like a fragile millennial. Unless WWE Superstar Roman Reigns is at your party, as he is technically a millennial and is very, very strong.

Ron Swanson from Parks and Recreation

If you've got a burgundy polo and a thick mustache — or any facial hair, really — you can style it into the canonical mustache from everyone's favorite Libertarian, Parks and Rec's Ron Swanson.

The only tough part of dressing up as the creepy Log Lady from Twin Peaks is finding the right log. Be prepared to trek into the forest with a hatchet.

A lot of people would look at the man on the oatmeal boxes and assume they'd need a wig to be him for Halloween. But those people are either a) not imaginative, b) the kind of people who don't own pillows they could stuff into a hat to vaguely resemble the Quaker Man's hair, or c) not incredibly poor.

Step inside of a clear trash bag and blow up some balloons, and bam — you're a bag of jelly beans. You can also be Bertie Bott's Every Flavor Beans from Harry Potter if you rub some of the balloons in garbage, or your armpit.

If you want to dress up as Mortal Kombat's Sub-Zero real quick, a couple of blue and black t-shirts will get you where you need to be. Flawless victory.

Honestly, just a unibrow and any red piece of cloth wrapped around your neck will make you into the art icon.

If you're willing to shave your facial hair into Tony Stark's iconic (and silly) goatee, you can be Iron Man without having to buy (or build) an Iron Man costume.

Some suspenders and cut-out mustache will make you into Nintendo anti-hero Waluigi real quick, but be warned — Waluigi is literally the most popular character on the internet, so a lot of folks will probably be dressed as him this year.

If you want to be Audrey Hepburn from Breakfast at Tiffany's, all you have to do is tie your hair up in a bun, put on an elegant dress, and push a long stick into the butt of your cigarette.

Okay, it is a lot to ask that you have a bunch of orange fur lying around, but you can find that stuff very easily at a craft store, and it'll be worth it. Nothing will get you more points on Reddit this year than being Gritty for Halloween.

Peter Parker had to slap together a Spider-Man outfit during his early superhero days, which means you can too! Red hoodies, blue t-shirts, and swim goggles will pull this costume together.

If you're going to an '80s-themed party and need a quick costume, a milk crate, red hoodie, and inkjet-printed picture of E.T. will save your Halloween.

In the tradition of Disney Bounding — the practice of wearing regular clothes that hint at Disney costumes that people wear to Disneyland because you're not allowed to wear costumes into the park — this simple Monsters Inc.-inspired costume is easy to put together with a few hoodies and foam cut-outs.

If you can style your hair straight up, you can be Cartoon network's own idiotic Elvis, Johnny Bravo.

The D*ck in a Box guys

Wearing goofy sunglasses, butting your top button, and taping a present to your belt buckle instantly makes you one of SNL's famous "D*ck in a Box" guys.

Jim from The Office as "BookFace"

And here it is, the king of not giving a damn about Halloween — The Office's Jim. While Jim's worn some truly lazy costumes throughout the show's run, the easiest asks you to simply roll up your sleeves, wear a tie, and write "BOOK" on your face. (Then you're "BookFace." Get it?)