Do You HATE Mayonnaise? Science Just Gave Us The Definitive Reason Why | 22 Words 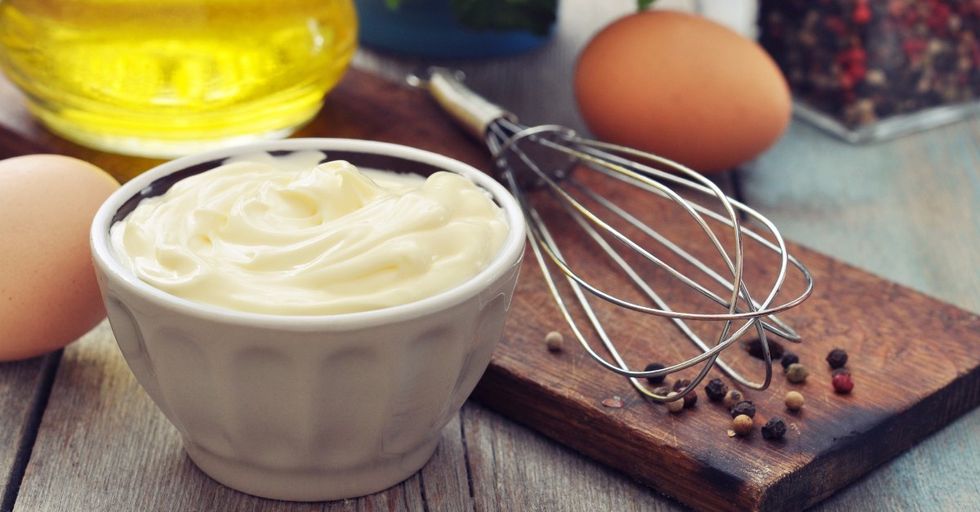 Do You HATE Mayonnaise? Science Just Gave Us The Definitive Reason Why

Every once in awhile a writer is tasked with a subject that goes against the very grain of her being. This requires her to set aside her core beliefs, bias, and all that is sacred in order to fairly address the subject matter.

I am camped firmly on #TeamMayo, and yet I find myself reading articles likening my favorite condiment to bodily excretions of the worst variety. Fear not, dear reader, for I have come through the fire hardened with the uncomfortable combination of revulsion and craving, so that I may fairly present you both sides of the much-contested Mayo Debate.

In a recent Popular Science article, writer Kendra Pierre-Louis explains why an aversion to (delicious) mayonnaise is backed by science.

First, Pierre-Louis clarifies the difference between dislike and disgust. She uses red delicious apples, which she dislikes, as her example. If she were given a cocktail served with a slice of red delicious apple in it, she may take out the apple and discard it, but still drink the cocktail. Were she given a cocktail with a cockroach in it, however, even if the cockroach were removed, the drink would still disgust her to the point that she wouldn't drink it. Disgust involves a physical, visceral reaction. Clear enough. So far, we're on the same page.

According to the food sensory consultant (that's a thing?) Herbert Stone, who Pierre-Louis interviewed, approximately 20 percent of people don't like mayonnaise.

Pierre-Louis' main complaint is that mayonnaise is ubiquitous despite so many people not liking it. Fair point. She explains that even when a "less vile condiment, like a whole grain mustard—a condiment with dignity" is used, it often gets mixes with mayonnaise. "The powers that be cannot allow its presence to go unmolested. No, the mustard gets mixed in with mayonnaise in an abomination called mustard-mayo. Mixing Sriracha with diarrhea doesn’t improve the presence of the latter. Why would adding mustard to Satan's sauce improve the situation?"

Well, that escalated quickly. She defends her comparison with science.

While Pierre-Louis fully admits that there has never been a study to see how many people are disgusted by mayo vs. how many people simply dislike it, she maintains that the (delicious) creamy condiment triggers our biological instinct to avoid it. According to University of Pennsylvania's Paul Rozin, a psychologist professor who has researched disgust for over 30 years, disgust comes from a biological need to protect us from contamination. He says, “Feces is the universal disgust, like the first disgust." Rozin goes on to explain that we instinctively avoid other people's excrement because it's contaminated. We are disgusted by it to keep us safe. “Disgusting foods are contaminating," says Rozin. “If you put a little bit of it in something, other people won’t eat it." That's pretty much where the science ends with this whole "scientific proof" that mayonnaise is disgusting.

But that doesn't stop Pierre-Louis from viciously maligning mayo.

She writes: "It’s viscous quality is the sort of thickness that you’d get from fluid oozing out of a rotted carcass as anyone who has ever poked a rotted squirrel with a stick can attest ... And the creamy appearance of mayonnaise isn't dissimilar from what would emerge from say a popped zit. Delicious." Come on! This isn't fair.

Mayonnaise is simply an emulsion of egg yolks, oil, vinegar, lemon, and seasoning. How could that possibly be bad?

It can't be. And it's not. Yes, I wholeheartedly support the decision to avoid the mayo-laden pasta salad that's been sitting outside on a 90-degree summer day, but a world without mayonnaise is not a world in which I'd want to live. Likening this simple, delicious, and versatile condiment to the revolting effusions of dead rodents is bordering on libel. Mayo is the most hotly contested condiment ever created by mankind. People had a lot to say about this article.

Many agreed with Pierre-Louis.

Mayonnaise does seem to trigger a strong reaction in those who dislike it. And the aversion isn't cultural. According to Stone (the food consultant), “You will find this kind of polarization in other countries around the world. And it’s not just Western Europe—you will find a similar degree of like dislike in Asia as well." And yet, this condiment finds itself everywhere. Why? Because the people who compare it to mucus (and worse) are wrong.

Mayo is ubiquitous because it literally makes everything better.

@davidfrum Went on a high school date with a girl who dipped her fries in mayonnaise. Was all I needed to know - we had no future.
— Patrick McGee (@Patrick McGee)1510071611.0

Fries dipped in mayo — YES PLEASE. If this turns your stomach, ask yourself: have you tried it? I didn't think so. I know a few devout mayonnaise-haters, and they are the first to admit they've never tried it. These are the people we're contending with. Food fear-mongers!

Some people found themselves questioning everything.

As a person who generally sides with science over popular or convenient opinion, the idea that science could prove that (delicious) mayonnaise is disgusting was disconcerting! Luckily, science did no such thing. Science proved that disgust exists and is likely a mechanism of survival. Also, that mayonnaise exists. That's all.

Sometimes you've got to stand on your own for what you know to be true.

Deviled eggs — reason enough to understand the the beauty of mayonnaise. BLT — the simplest of sandwiches relies on the quality of its few ingredients, and mayo, to bring it all together. Anyone who attempts to choke down a BLT without a smear of mayonnaise is wasting some good B, some good L, and some good T.

Mayonnaise is composed of very few ingredients, all of which have been scientifically proven to be delicious.*

*I made that up, but that doesn't mean it's not true. There are mayo imposters out there, and heavy-handed sandwich makers, and of course the food-borne illness risk that comes when foods that need refrigeration go without — and I think that these culprits are what give real mayonnaise a bad name. But the truth is that mayo brings a lot to the table.

Want to know the secret to the most perfect grilled cheese sandwich? Spread the outside of the bread with mayo, not butter or oil. I just improved your life. You're welcome.

The secret to the tastiest, most tender, homemade breaded chicken (or fish, or anything)?

MAYO! Dredge your chicken in mayo rather than eggs before coating with breadcrumbs. Again, I just improved your life.

I know, I know. Many of you are still in the #NeverMayo camp. That's fine. Have fun with your dry sandwiches and your plain eggs. It may take me awhile to be able to enjoy mayonnaise without conjuring up that squirrel analogy, but I will enjoy it again, and my life will be so much more delicious because of it.