Do You Have What It Takes to Be a Princess at Disneyland? | 22 Words 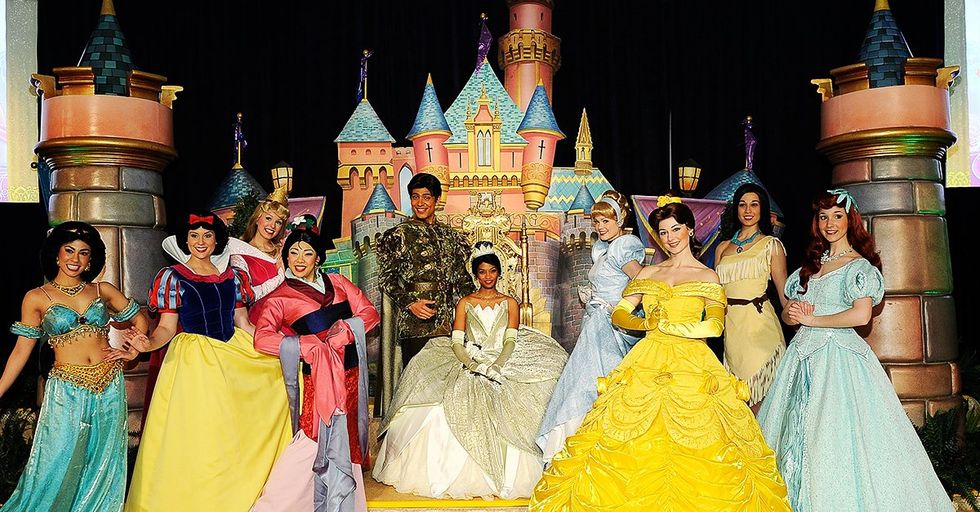 Do You Have What It Takes to Be a Princess at Disneyland?

You may have dreams of being a Disney princess someday — who doesn't?

But it's much easier said than done.

Before you undergo your quest to be a Disney princess, you should probably have an idea of what the job entails. Here are some things you should keep in mind...

It all starts with a grueling audition process.

And I do mean grueling. A single audition typically takes eight hours of dancing, singing, acting, and doing everything you can to convince the people doing the hiring that you can be a Disney princess.

But of course, most people don't make it through the audition process.

More than half of the people who audition for Cast Member roles don't make the cut. And they don't tell you why you've been eliminated; you just get a simple yes or no. On top of that, you can only audition once every year, so if you don't make it the first time, it'll be another 365 days until you can try again.

You don't audition for a specific role.

They may be hiring for a specific role, but they don't tell you that ahead of time. (That being said, if you ever audition, do not show up dressed as your favorite character or the character you'd most like to play. If they're not hiring that role, it won't work out for you.)

In fact, you have a better chance of being hired if you look like people who already work there.

There are often multiples of each Disney princess at the park at any given time. If you look like someone who's already playing the part of one of the princesses, you have a better chance of being hired on as their lookalike. There's one thing that will ensure you never get hired as a princess...

No visible ones, anyway. The powers that be are very strict about this one.

OK, let's assume you got the job. Now the real work begins, starting with studying up on your character.

You're expected to know absolutely everything about your character. If you're hired, you'll spend several days studying up on how to act and speak to Disney guests.

You even have to master their signature.

Each Disney character has a unique autograph — and has ever since the park opened. That means that if you're hired to play Cinderella, your autograph is going to look exactly the same as every other person who has ever played her. Obviously, that takes a lot of practice.

While in costume, you're expected to stay in character at all times.

That includes using the princess' voice every time you open your mouth to speak. Depending on the character, this could really do a number on your vocal cords.

Yep! When you're in costume as a Disney princess, you're expected to be standing at all times. (Unless you're crouching down to take a picture.) This next Disney princess rule is actually pretty surprising...

No singing allowed, either!

Not during the meet and greets, anyway. Some princesses do sing in certain circumstances, such as Belle during the Beauty and the Beast show at Hollywood Studios, but they have special contracts that allow them to do so.

Oh yeah, you also won't be a princess right away. First, you have to do a "fur character."

(As opposed to a "face character," which is any character who doesn't wear a mask.) And yes, those costumes are SUPER hot.

You probably would have guessed that Disney princesses are expected to smile at all times, but take a second and think about how tricky that could actually be in practice. After all, it's still a job, and jobs aren't always a barrel of laughs.

And sometimes, that job requires you to deal with bratty kids.

Some kids are going to try to cut the line, or argue with their parents, or just be all-around not very nice in the moment that you interact with them. But that doesn't matter because you have to be kind and joyful at all times.

Some parents are even worse than their kids.

Yep, some parents will throw a tantrum or get impatient as they wait in line for their kid to meet you. And some parents will try to cop a feel while they're taking a picture with you. Luckily, there are handlers for each character who are there to keep everyone in line, but they don't necessarily catch everything. And now for a bit of info about how to act when someone asks you a question...

You ALWAYS need to have an answer.

Disney princesses are instructed to answer all guests' questions. Obviously, that requires a lot of quick thinking and improvisational skill. Also, they're not allowed to reference any properties that aren't in the Disney universe. (For instance, Jasmine has no idea who Harry Potter or Thomas the Tank Engine are.)

It's not much more than minimum wage, though. You're not going to be making mad bank as a Disney princess.

Sometimes you have to wear costumes.

And that stuff can be heavy. And bulky. And hot. And awful.

You also have to wear wig.

Everyone wears a wig. Even if your hair is the exact same color as your character's. Again: Hot. Bulky. Itchy. Awful.

And you don't really get any perks when you're off-duty in the park.

You still have to wait in line with the normal people, and there's no special merchandise or anything like that. Still, you do have one of the most magical jobs in the world, so that's something. Share this with another Disney fan!