Do Your Feet Look Like Any of These? That Means You Have THIS Type of Personality... | 22 Words 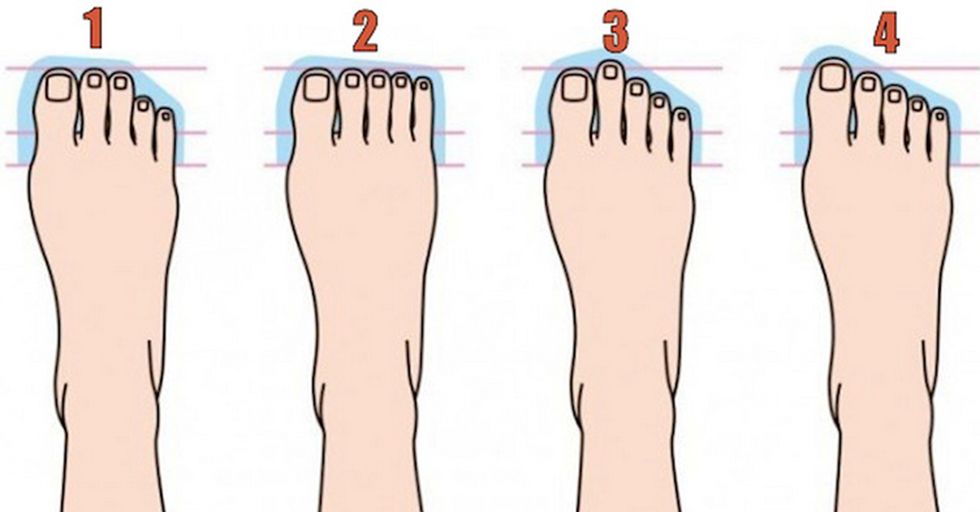 Do Your Feet Look Like Any of These? That Means You Have THIS Type of Personality...

You might be familiar with palm reading, but did you know that the science (art?) of reading peoples' feet is perhaps even more prominent throughout history?

It's long believed that the shape of your foot is directly correlated to your personality. The ten different shapes and types of feet below match with ten personality types, so see which type of foot most closely matches yours. Then see what characteristics that foot shape says you carry.

This is the most common type of foot. People with this foot are outgoing, social, and charismatic. They tend to thrive in the business world and as the center of attention.

This is also known as a "peasant foot." Those who have this foot are generally calm and calculated. Their reliability and practicality may not be flashy, but they're very consistent.

This foot peaks at the second toe. Those who have this foot are often enthusiastic and carry motivational qualities. You'll see this type of foot a lot in both artists and athletes, but also speakers and innovators.

If your foot has this elongated thin appearance, your toes are probably squished together. You tend to value privacy and carry with you many secrets. You can also be impulsive and subject to quick mood changes.

Unable to separate the little toe

If your little toe stays close to your others, you generally like a structured process to work within. They thrive on security, and for that reason, they make great companions.

Ability to separate the little toe

People with this characteristic tend to thrive on change. Routine and structure tend to bore them, and they'll lose interest in those tasks quickly. They tend toward the adventurous and often resort to drastic measures to spice things up.

Little toe on the side of the foot.

People whose little toes sit off to the side tend to be rebellious and have their own way of doing things. They're generally unconventional and thrive when allowed to be that way.

Gap between second and third toe

People with this type of foot can compartmentalize their emotions well. They excel at tasks requiring emotional detachment.

People with this type of foot shape tend to be planners. They're methodical, organized, and get a little apprehensive when they're not in control or totally prepared.

Narrow base on second toe

If the base of your second toe is narrower than the top, that means you're generally expressive. You tend to inflate the importance of things good and bad. When you're in a bad mood, you're best left alone, but your good moods are infectious.