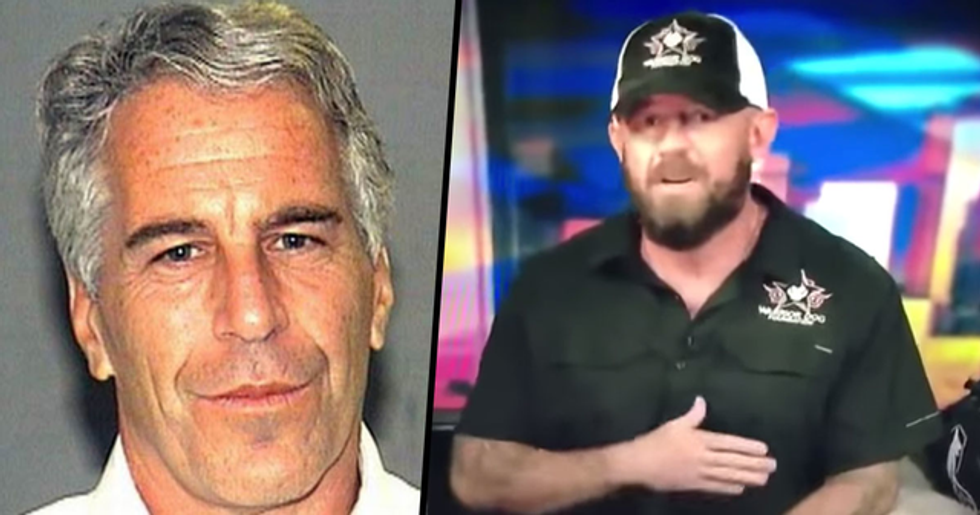 When news hit that shamed financier, Jeffrey Epstein had committed suicide while in prison awaiting trial, people were initially shocked. The fact that this child abuser would somehow manage to get away, without ever facing up to his victims in court, seemed a total miscarriage of justice, and the internet felt this was massively unfair.

But as more and more details of Epstein's death were leaked, things started to not look quite right. The man who has, in the past, claimed to be the President of the United States's "best friend" managing to end their own life while in prison on suicide watch? Things just weren't adding up. What started as a bunch of suspicious conspiracy theorists on Twitter, was escalated to the Federal Bureau of Investigations, in the hopes of providing the world with answers.

Even a leading forensic pathologist has further disputed the "suicide" story.

And now one man has spoken out against the story of Epstein's death - in a truly amazing way.

Based on boys from dating apps trying and failing to "comfort" depressed girls by telling them they're hot, many have offered the same words to Epstein.

Epstein reportedly attempted suicide shortly after his arrest in July and was found in his cell with injuries to his neck and totally unconscious. After the attempt, he had been placed on suicide watch.

His suicide watch reportedly only lasted for six days.

And it was twelve days after this initial suicide watch ended that Epstein was found dead. This has led to many wondering why he wasn't being more closely monitored.

Many can't see how he'd have managed to successfully attempt suicide.

Hey, did Jeffrey Epstein commit suicide? He was on suicide watch. Impossible. was he murdered by his rich and powerful freinds?
— Norm Macdonald (@Norm Macdonald)1565444106.0

In fact, some see the story of Epstein's death as totally unrealistic and impossible - and suggest there must be a different story.

This story really does bring a whole new light to the nature of truth - and the hierarchies of power. Even those who never go for conventional "conspiracy theories" can admit this is a little bit suspicious.

But one thing's for certain - it seems justice is still far away when it comes to Epstein's numerous victims. As Jennifer Araoz, allegedly raped by Epstein aged just fifteen, puts it, "I am angry Jeffrey Epstein won’t have to face the survivors of his abuse in court. We have to live with the scars of his actions for the rest of our lives, while he will never face the consequences of the crimes he committed the pain and trauma he caused so many people."

He claimed the autopsy following Epstein's death had signifiers suggesting a homicide, rather than a suicide.

You may recognize Baden from HBO's Autopsy.

He's examined over twenty thousand dead bodies in his time, which would lead you to think he knows what he's talking about.

His claims revolve around particular fractures in Epstein's neck.

“Those three fractures are extremely unusual in suicidal hangings and could occur much more commonly in homicidal strangulation," Baden claimed.

"I’ve not seen in 50 years where that occurred in a suicidal hanging case," he went on.

And there are other reasons Baden suspects a homicide. “It was determined that the two guards who were supposed to be working in that area of the prison had allegedly fallen asleep and hadn’t made their 30-minute rounds for more than 3 hours," Baden continued.

In any case, it seems the mystery of Epstein's death is far from being solved. "It doesn’t give you the answer," Baden concluded. "It's not a typical hanging case." Want to learn more about the mysterious Mr. Epstein? Scroll on to learn of the weirdest items police discovered in his Upper East Side apartment.

And now another voice of dissent has been added into the mix.

While it seems many don't believe the public story about how Epstein died, there has been one man, in particular, to speak out - in a rather surprising way.

This man was being interviewed on Fox News in a segment about military dogs.

But right at the end of his interview, he changed the topic and said something we can't imagine Fox is too pleased about.

And he had an excellent reception online.

Many people loved this incredible message, calling it an "expert act of trolling."

Now he's drawn attention to himself, some fear he'll meet the same fate as Epstein.

It's pretty incredible viewing - what a brave (or stupid) guy! Want to learn more about the creepy world of Jeffrey Epstein? Scroll on to learn of all the bizarre items found in his Upper East Side apartment.