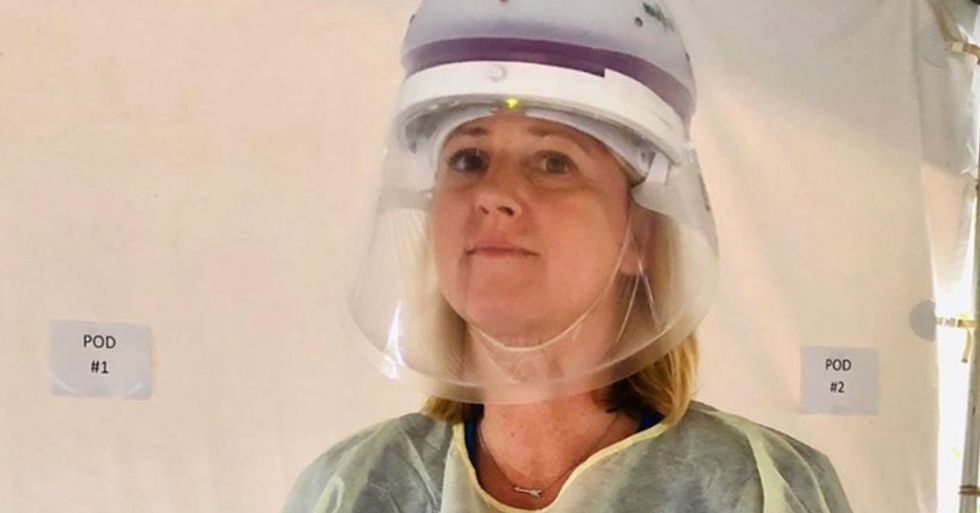 After a study concluded it was "unprofessional" for female medics to have bikini photos on social media, an influx of doctors are taking a stand against sexism by posting their own bikini snaps online.

Now, one particular picture has gained traction after a doctor shared how she saved a man's life while in a bikini.

Sexism has been apparent in the workplace for far too long now...

And even though we're living in the year 2020, things haven't changed an awful lot.

Women continue to be discriminated in the workplace...

And even if it's "the little things" such as being judged on the way they dress, this is not acceptable and it still shouldn't be happening.

The way in which a woman decides to dress or present herself has nothing to do with her intelligence and capabilities...

And their appearances shouldn't stop them from achieving their true potentials.

When will things finally change?

And when will women be treated exactly the same as their male peers who are working on the same level as them?

But some have already well and truly had enough.

Across the globe, women are taking a stand. Dr. Sarah Jane, a professional doctor from Adelaide in South Australia, is one of many women taking to social media this week.

And she isn't afraid to show them off!

She has worked as a doctor for a number of years now...

And her years of hard work have resulted in her being very good at her job.

And the fact that she's covered in tattoos and has an alternative style doesn't change that at all.

She uses social media to "smash" stereotypes around tattooed professionals...

And she's proven that body art doesn't affect a person's capabilities to do their jobs - especially those working in the medical field.

But sadly, Sarah has faced judgment and discrimination in the past because of her looks...

And she recently came across a medical journal that slammed female medical professionals for "wearing swimwear and fancy-dress costumes."

The controversial research was published in the Journal of Vascular Surgery and it basically said that women who work in the medical field shouldn't be wearing revealing and inappropriate clothing - especially bikinis - on social media. Okay then...

This proves that sexism in medicine is still "alive and well"...

And women like Sarah are the ones who are suffering the most from it.

She decided to speak out about the sexist journal...

And she joined an army of female medical professionals who have been posting pictures on social media of them in swimwear to protest against this discrimination.

"NEWSFLASH, FEMALE DOCTORS CAN WEAR WHATEVER THEY WANT! Female surgeons, doctors, nurses, all healthcare professionals - we can wear a bikini, a dress, or we can wear scrubs. This does not change how good we are at being a healthcare provider. We can wear WHATEVER we want in our free time, & still, save your life."

"Sexism in medicine is alive & well, but we won't let that stop us. In this ridiculous article making its rounds on social media, the vascular survey authors sought to determine how many vascular surgeons had participated in what they state is 'inappropriate social media behavior', which they defined as FEMALES IN BIKINIS - BUT GET THIS, NOT MEN IN BATHING SUITS."

The fact that the study was written by men is almost laughable...

"This 'study was written by 3 men who created fake social media accounts to spy on applicants. Is this a joke?" Sarah then said. "WOMEN IN MEDICINE, whether you're a nurse, medical student, resident, registrar or consultant, post your favorite bikini pic, or dress pic/Halloween pic.. and hashing #medbikini. We have to drown out the sexism in medicine & keep it moving."

Following her inspiring post, Sarah was bombarded with messages of support.

"Amen! I’m a female physician and I wear whatever the f*** I want," one of her followers wrote.

"What you do in your own free time is no one's business and doesn’t need to be justified. Sexist nonsense - you shouldn’t need to deal with how disrespectful they are."

What a woman wears in their personal time should be completely irrelevant to their job...

Especially if they have one that involves saving lives on a daily basis.

Now, several other women are posting bikini shots online in protest of the journal.

Couple of "unprofessional" obstetrician gynecologists right here - but only one of us has been called "sweetie, kid… https://t.co/Kf5p3hz31A
— Ariela Rozenek (@Ariela Rozenek)1595560093.0

The hashtag #medbikini blew up on twitter as more and more female medics joined.

The pictures just kept coming in...

So sorry that my bikini offends all the professionalism police out there!!! #MedBikini #MedTwitter https://t.co/MEQOGdorKe
— Mel (@Mel)1595593651.0

Such a powerful statement.

Since when was a bikini offensive?

It breaks my heart, but this just shows a peak behind the curtain at how behind and backwards the culture in medici… https://t.co/Qwd2vTIEJ5
— Emily Casey (@Emily Casey)1595591561.0

The world has gone mad.

The men who wrote this journal can keep their opinions.

It's so amazing to see all these women standing together on this topic.

You can be a doctor and wear a bikini in your spare time? Mind-blowing.

The most recent social media post to blow up is from Dr. Candice Myhre, a physician.

She posted two images of herself saving a man's life whilst wearing a bikini. The following images include blood and injury which some may find distressing.

The post contains a lengthy caption that begins by saying "Dr. Bikini will save your life in the middle of the Ocean when you get hit by a boat."

"I will take you out of the ocean on a surfboard turned into a backboard, tie off your exsanguinating wound with my rash guard, take you to my under equipped urgent care, stabilize you in 1 hour with an IV, oxygen, morphine, fluids, Foley, and put your open femur fracture in Bucks traction, fly you by helicopter to a local hospital, order and interpret all the labs, xrays, CT scans, suture/staple all your wounds, splint your clavicle/ humerus and scapula fractures, sedate you, put a chest tube in your 5 rib fractured hemopneumothorax and fly you by jet to a specialty hospital in another country....all in my you guessed it 👙"

"I am an Emergency Medicine Physician standing in solidarity with female vascular surgeons today. NEWSFLASH: FEMALE DOCTORS CAN WEAR WHATEVER THEY WANT."

"Female doctors, nurses, NPs/PAs, all healthcare professionals - we can wear a bikini, a dress, or we can wear scrubs. This does not change how good we are at being a healthcare provider. We can wear WHATEVER we want on our free time, and still save your life."

The post continued, "Sexism in medicine is alive and well. But we won’t let that stop us. In this ridiculous article published in a well respected medical journal, the vascular surgery authors sought out to determine how many vascular surgeons had participated in what they state is “inappropriate social media behavior", which they defined as FEMALES IN BIKINIS - BUT GET THIS: NOT MEN IN BATHING SUITS."

"Other topics considered “inappropriate" were Halloween costumes (should I take down my pregnant nun costume?) GUN CONTROL and politics. The “study" was written by 3 men who created fake social media accounts to spy on applicants. My dad who was a triple boarded cardiovascular and thoracic surgeon would not approve of their study. Especially since he liked gardening in a speedo. To finish, she wrote: "Women in medicine: whether you’re a nurse, medical student, resident, an attending, post your favorite bikini pic/dress pic/halloween pic/anything today and tag me, and #medbikini . We have to drown out the sexism in medicine and keep it moving. It’s 2020 people. Sexism is cancelled."

Since sharing her post Dr. Myhre received hundreds of comments in support of her choice to speak up.

She has since even shared another story of the ability to be a doctor whilst wearing a bikini. She wrote, "Trigger warning ⚠️: One of my first surf doctor 🏄‍♀️👩‍⚕️ experiences back in 2009 at an isolated surf camp in Indonesia. Spent 1 hour scrubbing coral out of his head that went down to his skull. 👙 Bikinis improve patient satisfaction scores and lower the numbers on the pain scale."

Let's hope that the men who wrote this journal will learn something from this movement...

What do you think? Do you think that female medical professionals should be allowed to wear whatever they want in their spare time? Keep on reading to learn about KFC's sexist ad that got them in a lot of trouble...