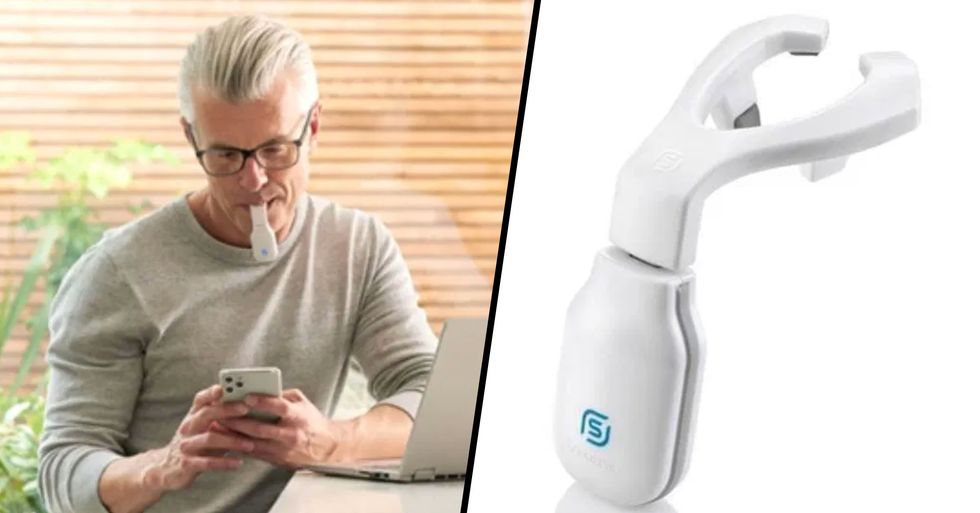 Doctor Invents 'Cure' for Snoring by Zapping Tongue With Electricity

Everyone knows that sleeping next to a snorer can make you well and truly dread bedtime. But now, it looks like there could be a saving grace. There's a new device on the market that promises to solve all your snoring-related problems

Scroll to the end to watch the video of the handy device...

They might wake up and stop briefly after step 6, but you better believe you're going to be right back at step one once they fall back to sleep.

Well, there's a new device on the market that promises to solve all your snoring-related problems.

You might finally be able to get a good night's sleep!

Thanks to this brand new gadget, you might be able to silence your partners snoring.

The NHS surgeon and sleep disorder specialist has invented the Snoozeal.

The Snoozeal claims to silence snoring.

It has to be worn for twenty minutes a day for 6 weeks to notice any improvements.

It's for the greater good.

Twenty minutes is nothing compared to a lifetime of sleepless nights.

You don't wear it at night.

The flexible device fits at the base of your mouth and rests against each side of the tongue.

The 2 electrodes that sit either side of your tongue zap it with a tiny current that you have full control over.

It is connected to your smartphone.

The current is said to tighten the weak muscles in your tongue and throat which are usually what causes people to snore.

The app then records your sleep.

Which you can check in the morning to see if your snoring has improved.

The invention is hopefully launching later this year.

It has been backed by private and government funding.

Prof Sama has been refining his invention for years.

He said: “Many devices on offer do not work and are unpopular because they have to be worn at night, so my aim was to develop something that could be used for a short period of time once during the day."

Following human trials of both men and women in London and Germany, the Snoozeal worked at stopping patients snoring in seventy percent of cases.

There were people it didn't help.

For those whose snoring wasn't eliminated, it was significantly reduced.

He said: "The patients liked it and the results were very encouraging."

One London pub landlady has nothing but good things to say.

Fifty-year-old Louise Fitzpatrick has credited this device for getting rid of her snoring, which her and her husband have had to deal with for ten years.

She had tried everything to help cure her snoring.

She tried mouth-guards and over the counter remedies, but with no luck or hope of ever getting rid of her problem.

Then Louise tried the Snoozeal.

Louise said: "I was resigned to surgery but within a couple of weeks on the Snoozeal trial I started to notice a change, and by the end of the six weeks, I was hardly snoring at all. I was amazed. I’m now less tired and I no longer get complaints from Martin." Losing weight, getting fitter, and stopping drinking alcohol are all the other ways to help lessen your snoring problem.