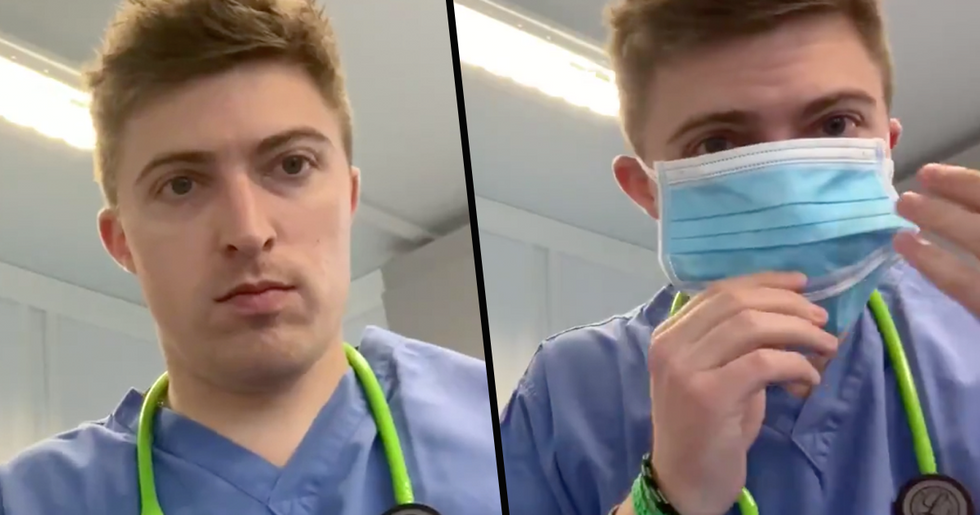 We've all seen the good old face mask debate on social media, but now, a doctor has finally settled to score once and for all.

Read on to watch the video of his makeshift experiment. This has really blown people's minds...

The debate is finally over.

A doctor in Ireland has taken to radical measures to answer whether or not face masks restrict oxygen intake this week.

Dr. Maitiu O Tuathail, who is based in Dublin, Ireland, filmed himself undergoing the makeshift experiment.

And, after watching the video, the internet has been left shellshocked. Karens, move out of the way.

Dr. Maitiu's experiment sets out to debunk the huge misconceptions that have been flying around about wearing face masks.

And he's certainly achieved his goal... the score has been settled once and for all.

Now, if you've been on the internet anytime in the last month or so, you'll know not everyone is happy about wearing masks...

And there are whole host of reasons these people tend to reel off to justify their anti-mask stance. For some,  it's selfishness - the whole "I'm young and won't get it" argument.

Although, many people tend to say the same thing...

That, as well as being uncomfortable, those wearing them feel like they can't breathe properly.

It's been a point of debate for weeks now.

Do they or don't they impact your oxygen intake? Or are some people just being very melodramatic? We just need answers, people!

We've all seen those videos of people going off the rails when told to put a mask on in stores...

It really is Karen central out there right now.

In fact, the whole mask debate has well and truly been dividing opinions online.

With those in full support of wearing face masks saying it should have been enforced sooner than it has. In fact, over the pond in the UK, the government is being hugely criticized for taking this long to make masks mandatory in stores.

Studies have shown there could be genuine physiological reasons as to why some people are refusing to wear them, however.

For instance, according to Huff Post, some people feel more in control by going against the grain, so to speak. “When faced with uncertain situations over which we have no control, we tend to exercise it wherever we can, so we feel safe," one expert said. “Some will feel safer exercising their control over not wearing a mask, while others will feel safer exercising their control to wear one."

Other experts blame mixed messages from those in power.

"The mixed messages we’ve all received are probably the main culprit for non-mask wearing. Inconsistent recommendations, along with historic polarization of political parties, magnify a common mistrust of government mandates."

Regardless of all this, many people just can't wrap their heads around why it's up for debate in the first place.

In fact, several people have confessed to wearing masks long before the pandemic struck.

Even on a lighter note...

Many have been joking how masks conceal half your face.

Well, amid all the confusion and heated debates, Dr. Maitiu has arrived to save the day...

While the internet goes round in circles, Dr. Maitiu has finally settled the score on what effects (if any) face masks have on those wearing them.

He decided to make a video after several of his patients began to ask him the same thing about masks.

As regulations on face masks become stricter, many patients were asking if they lower your oxygen levels.

Dr. Maitiu noticed something that many of these queries all had in common.

Those who were approaching him were referencing inaccurate information they had stumbled upon on social media.

So, he took it upon himself to give everyone the cold hard facts.

Dr. Maitiu decided to sit down and film himself hooked up to a meter measuring the oxygen levels in his blood.

He then filmed himself putting 6 masks on his face...

All while recording his blood oxygen saturation levels.

Viewers could see his levels in real-time.

And a select few probably didn't get the answer they were wishing for.

Well, despite having 6 masks on, his oxygen levels remained steady - staying at a healthy 98-99 percent. "Face coverings/masks don't reduce your oxygen levels! "I managed to get six face masks on + it had no effect on my oxygen levels!" he wrote alongside the clip.

Getting asked “Does wearing a face mask lower your oxygen levels” repeatedly by patients today! Based on what the… https://t.co/Cm7CnigxIL
— Maitiu O Tuathail (@Maitiu O Tuathail)1594737535.0

Well, we're glad that's all cleared up! For more like this, scroll on to watch the shocking moment a so-called "Karen" throws boxes at an employee after refusing to put on a mask...