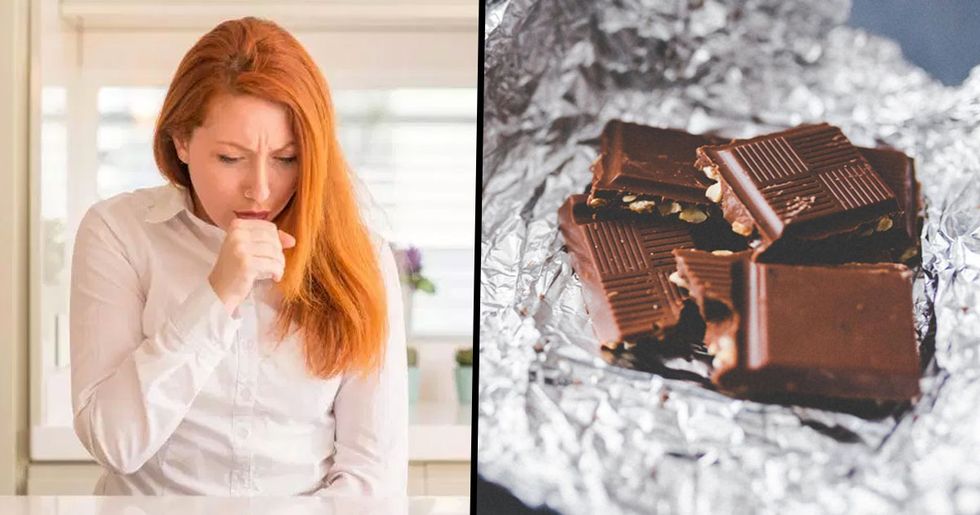 Sweet-toothed homeopaths all over the world will be overjoyed at the newly-announced findings of Professor Alyn Morice's new study on cough treatment.

Morice, head of cardiovascular and respiratory studies at the University of Hull, and a founding member of the International Society for the Study of Cough, published new-found evidence that 'chocolate can calm coughs'.

Writing for The Daily Mail, Morice discusses the results of 'the largest real-world study of an over-the-counter cough remedy ever undertaken in Europe', and even debunks some popular misconceptions surrounding the common cough.

Though gorging on the tan sweet stuff should by no means be considered healthy, it turns out - thanks to Morice's study, that a spoonful of sugar does actually help the medicine go down.

What the study said...

The study compared over-the-counter cough medicines and found that a new medicine containing cocoa was actually more effective at relieving the symptoms of a cough than a standard linctus.

Can I trust this study?

The Study, named ROCOCO, was well constructed.  It featured over 150 patients, and was a randomised control trial - where participants are allocated to specific groups at random to avoid bias.

What is this sweet new medicine?

The chocolatey medicine advised by the study is called Unicough, and it's available in most retail stores. But don't worry, the ROCOCO study was not funded or affiliated by Unicough.

Researchers at ROCOCO say it's a result of 'demulcent' properties. This refers to the viscosity of cocoa, how it covers nerve endings in the throat, suppressing the urge to cough.

Research by Imperial College, London, showed that an alkaloid, present in cocoa, called theobromine was more effective than codeine at relieving coughs. Codeine is the active ingredient in most over-the-counter cough remedies.

A problem with codeine.

Codeine, an opiate added to most cough medicine for its soothing effect, is actually very addictive and has led to a number of patients developing addictions to cough medicine. Cough medicine is extremely damaging to your teeth and heart in large doses.

A move away from opiates as an ingredient in commercial cough medicines could indeed protect a lot of people from the dangers of addiction.

So can I just eat chocolate by itself and expect to stop coughing?

Sort of... Whilst munching on candy bars, or downing mugs of hot chocolate won't help you - because the chocolate won't stay long enough in your throat - slowly sucking a square of chocolate could actually provide substantial relief.

Dark chocolate is much better for treating coughs; it contains less sugar and fat, and has higher doses of cocoa.

The demulcent effect of Unicough also ensures that ingredients such as diphenhydramine, levomenthol and ammonium chloride stay in contact with the throat for longer, helping to relieve the symptoms more effectively.

The study's results prompted the correction of a popular myth surrounding cough treatment.

They're the same illness! It's misleading to infer the idea that they need different treatments.

Manufacturers know that wet and dry coughs are two sides of the same coin - and deserve the same treatment - but promote the idea of two separate treatments for two separate ailments to boost sales.

The myth is widely promoted

Here's an extract from the TV talk-show The Doctors, where they infer the outdated idea that a wet cough and dry cough delineate different illnesses.

If wet and dry coughs are the result of the same thing - then what is that thing?

Almost all common coughs are caused by an infection. Specifically an infection to the upper respiratory tract. There is no real difference between a wet and dry cough in this instance except that sometimes sufferers experience a little bit of phlegm.

How did we get here?

We've been struggling to understand the nature of the cough for a long time, and the myth - like all myths - actually goes back a long, long way.

As far back as the Ancient Greeks, who believed illness to be the result of an imbalance of the four 'humours': black bile, yellow bile, phlegm and blood.

Though we can trace the origins of the medical misconception back to the Ancient Greece. The idea was mainly popularised during the Tuberculosis outbreaks of the 19th century - when the disease caused patients to cough up large quantities of phlegm and blood.

We cough because an infection has hyper-sensitised our upper respiratory tract, by hijacking the body's defence mechanisms. We do NOT cough because of mucus.

Diphenhydramine and ammonium chloride, present in most cough medicine, have been shown to relieve symptoms, but they don't clear mucus, they help calm the urge to cough.

Professor Alyn Morice told the Daily Mail, 'We don’t understand all the receptors involved in a mechanism like cough — but I am absolutely convinced that in years to come we will find there is a chocolate receptor involved in this urge to cough.'

Obviously, don't eat too much chocolate.

Best to bare in mind that too much chocolate is bad for you. It's addictive and high in sugar and fat, binging on the stuff won't do much to improve your health.

Another ingredient present in chocolate is Zinc. Sarah Flower, a nutritionist, told The Sun newspaper that zinc could also be helpful in combating the discomfort of coughs.

Can't eat chocolate? Not to worry, there are other homeopathic remedies for coughs...

Apple cider vinegar has antibacterial properties that can fight infection. Not that it's nice to drink on its own.